In the latest issue of Race & Class, the  lead article ‘Four days in August: the UK riots’ examines reports and inquiries conducted in the aftermath of last summer’s disturbances.

Professor Lee Bridges comments on the failure of government to consider the deeper structural causes of the riots in August 2011. Instead it has chosen to criticise what it sees as the breakdown of the family and the lack of moral character of young people. By ignoring the surveillance and over-policing of black and Asian young people, the government and the Met failed to address the political alienation of the young. 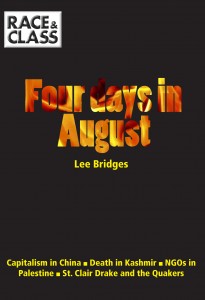 Race & Class is published quarterly, in January, April, July and October, by Sage Publications for the Institute of Race Relations; individual subscriptions are £27/$47, for four issues, with an introductory rate of £20/$35 for new subscribers.

This book should make an interesting read. I will like to include that the Employment Tribunals Service had continuously let Black and Minority Ethnic claimants down since October/November 2004 when employment law was changed. The introduction of the ‘burden of proof’ introduced by Tony Blair’s New Labour Government was designed to combat the Race Relations Act 1976’s and undermine it. I am attaching a caption from my letter to the President of the Employment Tribunals dated 17/02/2010: ” The best you will achieve in this respect is to be a major source of embarrassment to the government when the members of the public decide to take the law into their own hands. You are not far off of that mark. I enclose a photocopied caption from the Voice Newspaper’s caption of:” Young Black and Jobless”. The poor service from the public bodies like the Tribunal Service is contributing to this because of the negative messages you are sending out to employers.” What happened a year and six months later?

If the inquiries conducted by the Government had not included the running of the Employment Tribunals Service, then the inquiries can not have concluded fairly. It makes very little sense that the government is trying to investigate into the reasons for these riots, yet, ignores what looks like one of the core reasons for it.

There are good and bad people among black and white people. It is the corrupt people of all both groups who pose problems for the decent people of both groups and often set them up to fight. To lump all black people together is simplistic and categorises people by colour and not character which is an important distinction to make. It is a distinction that the Rev. Martin Luther King made in his famous “I have a dream” speech in the sixties.

Ralph Ellison’s award winning book, The Invisible Man also showed the complex nature of race relations and demonstrated that there are no simple answers. Black people are just as capable of betraying black people and causing them suffering as are racists. We only have to read Alex Haley’s Roots to see how some black people were sold into the hands of racists by other black people for money. Some Asians have also beaten down other Asians for money in history. People are complex and our struggles are complex.

For example, I know of a practising Muslim woman who was slandered widely after she fell out with a couple of wealthy people. She was slandered as a terrorist and a tart and an illegal immigrant and the wealthy people were able to use their wealth to get people of her own ethnicity who she did not even know to slander her widely so she was lied about by recent migrants, minority people in debt, criminals from the minorities, etc. Most of these people didn’t even know her.

This woman’s home was bugged by racists under the pretense of watching the terrorist and she was terrorised in her own home with normal things she was saying and doing in her own home being pounced upon and twisted in order to make up lie after lie about her. ( This was a woman with a 30 year exemplary work and school record who went to a top 6 university and was well behaved all her life). Her reputation destroyed ( despite having lived an innocent and blameless life), she ended up being the convenient scapegoat for every corrupt person in the workplace and was driven out of work, refused jobs she would have otherwise got and basically, blacklisted on complete LIES.

She could not get married and have a normal life and has ended up umarried and jobless at 40 despite going to an ivy league university and doing well at work, getting rave reviews as an EFL teacher from high flyers all across Asia and Europe. All her potential has been wasted and she has been thrown onto the scrap heap because her ethnicity and religion were used to demonise her and frame her and instead of equal opportunities, this woman who has behaved impeccably all her life has found herself betrayed by everyone ( minority help groups and native alike) and has had NO OPPORTUNITIES. This is because the wealthy racists used opportunists of her own ethnicity to lie to people of the minorities so that she became completely isolated and alone.

This woman was shunned and made into a pariah owing to this new, sneaky, covert but deadly form of racism and she has suffered terribly physically in recent years and suspects she has been harmed through the NHS and in other ways to frame her and even to take her life.

She also has strong reason to suspect that people were harming her each time she criticised them even in her own home as she would get sick soon afterwards despite having been in very good health before the hate campaign started.

She has approached various minority and governmental groups and asked for help and even sent her 30 year exemplary school and work record to the government three years ago and received no help at all. She knows that she is in terrible danger and could lose her life but no one is taking the threat seriously and no one will until the damage is done and it is too late and an innocent, promising life has been wasted.

What kind of help is there for this woman?

P.S. If racists are infiltrating and targeting minority people and natives who they have fallen out with through the NHS, this has wider implications for the whole of society so it would be in everyone’s best interests to investigate her case. This is an innocent woman who has suffered terribly for fifteen years.

It has to be remembered that many disadvantaged White kids were also involved in the riots; if I recollect rightly there were far more White people involved than there were Asian and Black kids. Why is this not being talked about? Is it only poverty when it involves Black and Asian people? As a White Working class person myself from a poor background, I am kind of confused why some White Middle class people are (supposedly) so concerned about issues involving Black and Asian people? It is all academic after all, most Middle class people being far removed geographically and socially from these issues. If people want genuine equality for ethnic minorities, they would also want genuine equality for everyone. I suggest that a number of Middle class people are really playing mindgames when they proclaim an interest in certain issues; but why, I can’t really say. If you call a magazine ‘Race & Class; then why aren’t you interested in the issues that affect both ethnic minorities AND White Working class people? I keep asking this question and as yet have had no satisfactory answer…perhaps someone can enlighten me?