Flying the flag for neoliberalism 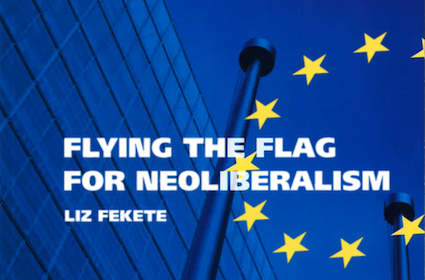 The January 2017 issue of Race & Class leads with a very timely article on Europe by IRR director Liz Fekete.

She looks, in the light of the Brexit vote, at the apparent rupture between Eurosceptic nationalists and transnational neoliberal elites, examining also the decline in support for Social Democratic and Conservative mainstream political parties. How, she asks, does ultra-nationalism plays out in different parts of the EU at a time of retrenchment, austerity, terrorism and insecurity – to fortify conservatism as well as neoliberal forms of governance based on new forms of surveillance. She shows how though some national elites draw on rightwing authoritarian traditions, nationalism can also prove advantageous to neoliberal transnational forces.

In the same issue of Race & Class lecturer Sara Park throws light on the issue of the growing popular racism in Japan, led by the Zaitokukai, towards people of Korean descent and the tendency for academics and politicians to trivialise this as xenophobia. She stresses the need to understand Japanese racism in terms of the country’s colonial past and its immigration control system which labels all ethnic minorities, including those born in Japan, as foreign.