Fighting for the soul of the voluntary sector

Everyone should read a recent report by the National Coalition of Independent Action (NCIA) on the ways in which neoliberal policies are destroying the purpose and politics of voluntary groups.

From time to time IRR News has commented on the ways in which privatisation, subcontracting and marketisation are infiltrating voluntary groups in the race and refugee sectors, potentially changing priorities and presenting challenges as to whether or how to work with a racist state. (see ‘The fading red line: Barnardo’s role in the detention and the removal of children‘, ‘Does Barnardo’s legitimise child detention?‘ and ‘The business of child detention‘) Those who face such quandaries have to read a recent summary report entitled Fight or Fright: voluntary services in 2015 from the NCIA which has carried out an inquiry from 2013-14 involving seventeen separate reports into ‘voluntary action, the state and the market’. 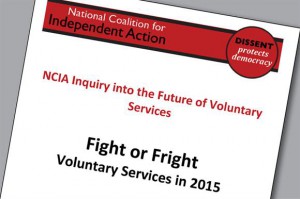 It puts into a larger context the fundamental issues that almost every organisation in the sector is now facing in one way or another and it goes back to the basics, the British values if you like, that underlie voluntarism as we know or knew it. For voluntarism means working for the public good in terms of need not profit. Privatisation kills its ethos. It is not just that contracts, outsourcing and competition have come in but also that the whole neoliberal vocabulary – of social investment, managerialism, efficiency etc – is contrary to voluntarism’s culture of helping one another. In that sense a pillar of democracy is being destroyed. The report is so telling, thorough and well organised that it does not bear a review, but rather a résumé. You have to read it for yourself. Refreshingly, it pulls no punches.

The voluntary sector, it begins, occupies ‘a space within civil society that is distinct from the State and the private sector; a space in which citizens come together freely to exercise self-determining collective action’. Voluntary action is political, it goes on. Voluntary services exist to do the things a government cannot or will not or should not do; and indeed to act as commentator and critic of state services and state action. As a servant of the state ‘this unique role is compromised’.

‘Those who care about poverty and inequality’ should be alarmed by the very clear direction of travel in the sector. The environment for service-providing organisations is increasingly difficult and hostile for the people they serve, the scope and quality of the services and their own independence and self-determination. And, unfortunately, many groups ‘have responded to pressures of co-option by the State and the private sector in complicit and supine ways, failing to defend their autonomy or show active solidarity with their users and communities.’

Power to the affluent

The severe cuts to services and living standards affect the poorest communities (the disabled, those on benefits, young unemployed, BME, refugee and asylum seekers etc) most and yet the capacity of voluntary groups to meet their needs 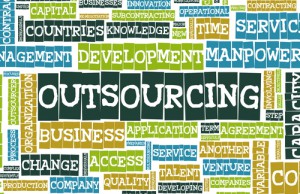 diminishes by the day as traditional funding goes and contracts promote a ‘race to the bottom’ in terms of quality of care. ‘Privation amongst VSG [Voluntary Sector Groups] beneficiaries and diminished capacity to respond’ should, says the report, have galvanised anger and resistance in the sector – but it has not. Yet the shift from grants to contracts has shifted the role of VSGs towards delivering government agendas and commissioning and procurement regimes favour only the most affluent in the sector. Smaller organisations are being forced to cut services, close down or amalgamate. For the larger charities[1] not only act as predators, swallowing them up, but the sector now has private sector companies and new social enterprises in competition too. Significantly the report states: ‘Locally-rooted providers have fallen out of the picture as large charities compete with one another and “swop” contracts as they win or lose in different areas.’

Both New Labour and the Coalition have blunted the voluntary sector by blurring distinctions between commercial and non-commercial services, promoting the vague concept of ‘social mission’ and encouraging the rise of ‘social enterprises’. The fact that one can no longer distinguish private from public or voluntary contributions to welfare has made it ‘more acceptable to VSGs to enter into subcontracting relationships with private providers’. Apparently at least 225 VSGs are involved as subcontractors in the latest, controversial government privatisation – of the Probation Service.

The report is critical, too, of the internal impact of the contract culture on pay and conditions of the VSG workers. In a working atmosphere increasingly geared towards managerialism and professionalism and away from social justice, the idea of volunteering has moved from self-help and campaigning to seeing volunteers as unpaid workers. And those who are on the payroll may find themselves, even in this sector, on zero hours contracts.

But one of the most dangerous consequences of changes to the sector (epitomised in the ‘Lobbying’ Act) is the fact that the sector’s critical voice is being silenced. ‘This role – of advocacy, campaigning, opposing excesses, abuses and injustices and holding powerful interests to account – is …perhaps the vital role of voluntary action, which has the unique characteristic of occupying the space between the market and the State.’ Even mild informed criticism has become unacceptable to the local and national state and dependency for funding and contracts compounds the incorporation of VSGs into statutory service frameworks.

It is not enough to write off this mutation as a commonsense response to a changing world – for that is to concede to the political context in which the voluntary sector is being rehewn. ‘These policies are being ideologically driven’ by a massive transformation of the role of the state and a grand political social-engineering project . What is happening to VSGs can be seen as collateral damage. The Coalition, like other western governments, is destroying the post-war welfare settlement, the idea of public service and redistribution of wealth. In place of a redistributive state is the market, which, according to neoliberalism, will not only deliver economic growth but can also rationalise public services through privatisation and introducing competition. Outsourcing of public services is now huge. In 2012 outsourcing in the UK amounted to 80 per cent of all such outsourcing in Europe the Middle East and Africa combined. And such privatising has been carried out by both Labour and the Coalition.

It was New Labour that concocted the term ‘Third Sector’ and this was not just a change of terminology but reflected the commercialisation and outsourcing that was shaping public service delivery. But while New Labour regarded voluntary 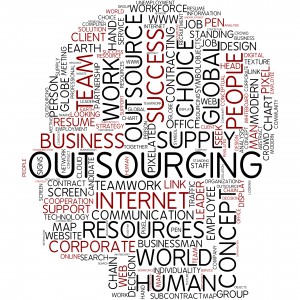 organisations as ‘preferred providers’ for many services, the Coalition’s preference lies with the private, for-profit corporation. This is why so many of the largest charities are morphing into private business lookalikes and many VSGs have re-labelled themselves ‘social enterprises’. Meanwhile, with the increasing emphasis on each citizen’s responsibility for his or her well being ‘the values of solidarity, mutuality and altruism that have been at the core of many voluntary organisations’ are put at risk. Organisations ‘are expected to harness concurrently both altruistic and self-interested motivations but mixing the two often comes at the cost of abandoning any sustaining voluntary sector ethos.’ It is hard not to conclude ‘that a significant part of the sector’s VSGs have sown the seeds of their own demise and remained silent about the consequences for their beneficiaries.’

What is to be done?

But all is not yet lost. ‘Alternatives to the market and radical action’ will be found, states the report, ‘in informal groups and networks operating on the basis of mutual aid, reciprocity, activism and conviviality.’ In other words everything that is not market valued. ‘ Now is the time to stand up, be counted and lead a truthful and plainly spoken campaign to change the mood and the music’. And this can be done by:

The cost of not facing up to this situation, and taking a stand, will, the report concludes, be very high indeed. Fight or Fright is not a passive critique of the sector but a call to arms.

IRR News: The fading red line: Barnardo’s role in the detention and the removal of children

Well put Jenny, an excellent summary that should tempt people to explore the source.

Completely agree, though we were alone in this…

THANK YOU JENNY, for highlighting this huge problem, we need now a few CVC’s ect to actually push forward and stand up for the smaller groups (although that I doubt will happen, in Wales we have WCVA nationally and locally DVSC, both are a menace to the true grass routes community volunteering and predatory in their workings.
However just as worrying are the RSL “Pennaf” complete leaches, their Chief Exec once described the most deprived ward in Wales (West Rhyl) as “our cashcow”, even to date we have the Welsh Government pumping funds into Pennaf on a housing regeneration programme that is clearly flawed and will ensure only that Penaff (Clwyd Alyn) continue to grow fat on SP funds and alike.

Why and how they are so unaccountable is a disgrace!!!!