A collection of essays on varieties of European racism contains valuable insights and useful lessons.

A minister cuts a cake. The cake is in the shape of a black woman, and the cut exposes her pink genitals, as a performance artist screams. The event, an ill-conceived critique of female genital mutilation, backfires, as the white, Swedish audience shrieks with laughter repeatedly, each time the cake/woman is cut. How has Swedish society degenerated into this kind of primitive racism? 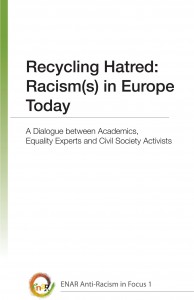 Dr Philomena Essed attempts to answer the question in ‘Entitlement racism: license to humiliate’, one of a series of essays in a new book from the European Network Against Racism (ENAR), arising out of its symposium on the Varieties of European Racism(s) in Brussels in September 2012. The book, Recycling hatred: racism(s) in Europe today, draws together contributions from academics, equality experts and activists across Europe, not only looking at ways in which old and new forms of racism manifest themselves, but also at how to bring greater accountability to governments which practise or condone institutional racism, and how to combat racism and xenophobia.

Essed’s piece discusses how rights to freedom of expression have morphed into the right to be offensive. She shows how, in various European countries, anti-Muslim and anti-black racist speech has left the fringes and entered the mainstream, through the use of liberal values (equality, freedom of speech, respect for gender and sexual identity) in profoundly illiberal and abusive ways. Other horrific examples of the self-centred, shameless exploitation of deeply racist, sexualised images of black people, under the guise of free expression, include a Spanish magazine cover featuring a naked Michelle Obama in the guise of a slave. Objectors are told to ‘get over it’: ‘if you’re offended it’s your problem’. She sees the phenomenon as a product of a neo-liberal entitlement culture focused on personal choice, which hides systems of privilege and disadvantage.

The IRR’s Liz Fekete takes this analysis further, describing varieties of ‘white victimhood’ ideologies around Europe, where those subjected to the most virulent racism – from Roma in eastern Europe to asylum seekers in southern Europe, north African-origin Muslims in France to ‘immigrants’ in the UK – are blamed: for crime; for being ‘unadaptable’; for taking jobs and benefits ‘belonging’ to natives; for threatening the natives by their ‘culture’; their religious observance or their fertility. She points out that the agenda of the Right is to dismantle what anti-discrimination protection exists, and to return to the ‘good old days’ of laissez-faire racism in employment, housing, welfare and education. Dr Sindre Bangstad gives concrete examples of this in Norway, where he reports that the Breivik massacre has not improved the discourse on Muslims. He examines the ‘mainstreaming’ or ‘naturalisation’ of anti-Muslim racism, tracing it to a deliberate campaign of lies and fabrications by the Progress Party, starting in 1987 when its leader Carl Hagen circulated a wholly false ‘letter’ from a Muslim boasting of conquering Norway for Islam through high fertility rates, and continuing with its dissemination of lies ever since.

There are other useful contributions. Eddie Bruce-Jones discusses the need to address institutional racism in German policing. Ibrahim Akrouh reveals judges who are not providing a remedy against racism through important legal decisions are also perpetrators of racism, as for example when the European Court of Human Rights upheld a headscarf ban for primary school teachers on the evidentially barren and morally dubious ground that they might proselytise the children in their care. Marwan Muhammad discusses the limitations of quantitative risk assessments in relation to racism, as where for example a young woman decides not to go to university because of the headscarf ban, or a mosque doesn’t get built (and so doesn’t get attacked) because of anti-Muslim agitation. Dr David Mark, focussing on Roma communities, emphasises the need to support self-organisation, describing how Roma councillors in a couple of Romanian villages have been able to bring about big changes, such as getting waste collection and electricity extended to Roma neighbourhoods, and Roma kids enrolled in school. Nick Lowles describes the development of positive and effective anti-racist campaigning through the UK’s  ‘HOPE not hate’ movement.

This may be a small book – it fits into a pocket – but it is packed with useful, if scary information, and contains important insights on the state of racism in Europe today, as well as much food for thought on strategies and priorities. It’s an important read for anti-racists everywhere.