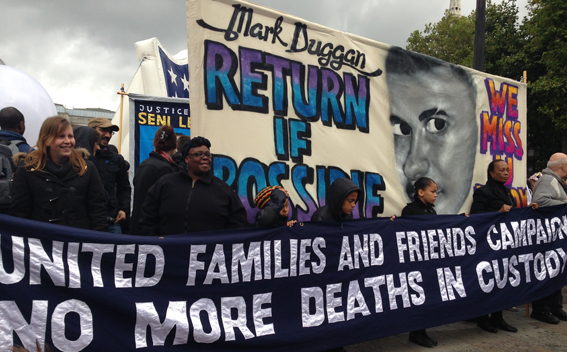 The United Families and Friends Campaign (UFFC) marched on Downing Street last weekend, as it has done for the last fifteen years, to mark the deaths of loved ones in the custody of the state. 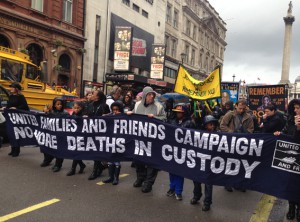 The annual remembrance procession was led by the families of those including Ricky Bishop, Mark Duggan, Demetre Fraser, Joy Gardner, Anthony Grainger, Olaseni Lewis, Sean Rigg, Jason McPherson, Thomas Orchard, Leon Patterson, Billy Spiller, Roger Sylvester and Jason Thompson. They were also joined by campaigners and supporters on the short march from Trafalgar Square to Downing Street where speeches from the assembled families followed – moving and angry pleas for justice.

A letter was also handed in at Downing Street to David Cameron: ‘For the record, this is the 15th annual 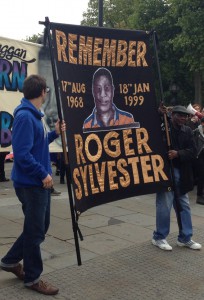 letter to the head of government from the UFFC since its inception in the late 90s when it was formed to demand justice for those who have died in state custody in suspicious and controversial circumstances. On no occasion has the government engaged in a process of meaningful dialogue following the delivery of the letters … The unlawful killing verdicts into the unlawful deaths of Jimmy Mubenga and Azelle Rodney earlier this year has yet again shown compelling evidence of wrong-doing, deceit and corruption by state officials (as in previous cases) where repetitive fundamental errors, racism and a lack of duty of care at an unacceptable standard has yet again been exposed … However, the deaths still continue with no accountability and the result is that deaths in custody are at an all time high. Countless years of unnecessary lengthy investigations continue to stifle justice to the families. The Hillsborough disgrace echoes year after year, case after case.

Injustices as in the cases of Joy Gardner, Christopher Alder, Brian Douglas and Mikey Powell, to name but a few, are inhumane. Yet the British government refuses and/or is unwilling to give justice where it is blatantly due.’ You can read the letter in full here (word doc, 132kb).

UFFC pictures from the march