On Sunday 17 June, as families celebrate Father’s Day, vigils will be held at police stations across the UK to remember loved ones who have died in custody.

Families and friends will gather for peaceful vigils in Birmingham, High Wycombe, London, Manchester and Slough. The national day of action, which is being supported by the United Families and Friends Campaign, aims to show solidarity with families who have lost loved ones at the hands of the state. 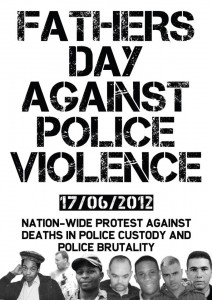 In recent months the campaigns demanding justice for those who have died in police and other custody joined forces to launch a petition calling for major changes in the criminal justice system. It demands the replacement of the Independent Police Complaints Commission with a body genuinely independent of the police, and the suspension of officers involved in deaths in custody for the duration of any investigation. Other demands include automatic prosecutions of officers following unlawful killing verdicts and the right to non-means-tested legal aid for the families of those who die.

Vigils across the UK

Petition on deaths in custody