The far Right, using information from an anti-extremist student body, is trying to sabotage Islamic events.

Casuals United, under the guise of No Platform for Islamic ‘hate preachers’, has been distributing the addresses and phone numbers of the venues, from Newcastle to Reading, Birmingham to Essex, where Islamic preachers are billed or Muslim educative days are planned and urging their readers to bombard organisers with tracts on ‘creeping Sharia’ and appeals to cancel the events. When the power of long-distance harassment doesn’t work, they threaten to demonstrate – and do. 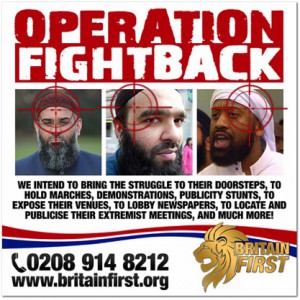 Others in far-right movements are taking their cue from the Casuals. Britain First (BF), whose key personnel are made up of disaffected ex-BNP figures, has recently been rallying under the banner of the English National Resistance (ENR), founded during a string of ongoing demonstrations outside the home of Abu Qatada. It unites BF, the English Volunteer Force, the South East alliance (an EDL splinter group), Casuals United and EDL members. This alliance, which describes itself as ‘the “SAS” of patriotic politics’, plans to pick up what the Casuals started. It has launched Operation Fightback, which aims at turning the English National Resistance into a flying picket ‘to bring the struggle to [extremists’] doorsteps … to expose their venues, to lobby newspapers, to locate and publicise their extremist meetings’. This has already resulted in the intimidation of an imam on the doorstep of a mosque on Crayford High Street in March.[1]

The Casuals’ tactics were honed in ad hoc actions over the years since the group’s inception, such as their response to a three-day weekender for Islamic scholars in York. Islamia Village, a series of seminars organised in 2012 by the Islamic Network, had to be cancelled after members of the Casuals and the English Defence League (EDL) allegedly threatened to burn the place down with everyone in it.[2]

But now Casuals United seem to have been afforded more ammunition in the research released by Student Rights, an organisation that ‘exists to counter the long proven encroachment onto university campuses by extremist elements across the United Kingdom’. Although it has recently drawn attention to the far Right’s activity, the majority of its work has been on ‘Islamic extremist’ events. Student Rights has unwittingly provided Casuals United with information about Muslim students’ activity around universities, which is then used by them to harass and intimidate the venues and societies hosting the events.

Student Rights describes itself as a ‘non-partisan group dedicated to supporting equality, democracy and freedom from extremism on university campuses’, but in practice it appears to lean towards right-wing lobbying. Although Student Rights denies a direct link with the neoconservative think tank the Henry Jackson Society (HJS), the evidence suggests otherwise. Payments made in Student Rights’ name in 2010 were found to be from a HJS bank account. Student Rights director Raheem Kassam is the Director of Campaigns for the HJS.[3] Student Rights was set up in 2009 as a student representative body, but questions have been raised as to how many students it represents. ‘Where is their legitimacy to be pressuring SUs without any significant student membership to speak of?’ asks an NUS officer.[4]

Although there is nothing to suggest that Student Rights ever intended its information to be used by groups like Casuals United, its counter-extremism agenda shares some aspects of the far Right’s framework about Islam and the Left. And although there can be no objection to students expressing concern about offensive speech from any quarter, Student Rights has taken liberties with its counter-extremism mandate, opposing: events in support of Palestinian causes; events in solidarity with Guantanamo detainee Shaker Aamer (labeled an Al Qaeda operative); and Boycott, Divestment and Sanctions campaign meetings. In 2009, Student Rights criticised No Platform for fascism policies, claiming that it was ‘another example of Student Unions going beyond their role and limiting free speech on campus’.[5] This has not prevented it from pursuing a No Platform policy not just for hate speech, but seemingly for any cause it dislikes.

Suddenly, after its own work inadvertently precipitated the arrival of Casuals United and the EDL on university campuses in 2013, Student Rights has extended its work to examine the far Right. After the Casuals and members of the EDL turned up at the University of Reading earlier this year on the basis of Student Rights’ information, the organisation issued a statement condemning the actions of the far Right.

Events and venues targeted by the far Right

Groups such as Casuals United and the ENR have targeted (with or without the unwitting help of Student Rights) a number of events:

Nice to see most of the events going ahead anyway. We should not be intimidated by a bunch of racist low lives.

Shame on University of Reading though, very cowardly indeed.

The E.V.F are not a racist organisation. We do not have any links to Britain First and do not work with them anymore. This goes for Casuals United and the S.E.A who still have links with us as they are not racists orgs ethier. If Hate preachers etc are booked to speak there vile hatred for the West on a campus in the U.K then we will make a complaint to that campus and this is done peacefully over the phone by concernd Patriots, there has only been one demonstration in Nottingham and that was because the campus there wouldnt cancel there event for a hate preacher to speak, even after the campus recieved phone calls of complaint first. The demo was peacefull and passed without incident (we are not the EDL)
M Nash