Family marks ten years since the death of Mikey Powell

The family of Mikey Powell marked the ten years since his death with a vigil outside West Midlands Police HQ and an inspirational meeting. 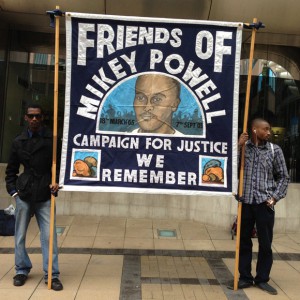 On Saturday 7 September, family and friends of Mikey Powell as well as the families of others such as Joy Gardner, Sean Rigg, Azelle Rodney, Habib ‘Paps’ Ullah, Lloyd Butler and Anthony Grainger, who also died in custody, gathered outside the West Midlands Police HQ in central Birmingham to take part in a vigil held by the Friends of Mikey Powell Campaign for Justice to mark the death of Mikey Powell at the hands of police.

It was 7 September 2003 that he died. Mikey, who was suffering from mental health problems, had smashed a window in the family home. His mother called the police assuming they would help and take him to hospital. However, once they arrived, he broke a window in their car and, as a result, the officers drove at him and he was injured.  Police then used CS spray on him and during the struggle he was also struck with a baton and held on the ground by an estimated eight police officers. After being held on the ground for some 15 minutes, Mikey, covered in blood, was then taken (face down) to Thornhill Road police station instead of a hospital. At the station he was again carried face down where officers discovered he was not breathing. An ambulance was called, but it was too late. In December 2009 an inquest jury decided that he had died as a result of positional asphyxia after being placed on his front in the back of a police van.

Filmmaker Ken Fero, (Migrant Media) who has documented the struggles for justice by the families who have died in custody since the 1990s, also premiered his latest offering, Po Po. It graphically portrays the harrowing last moments of 25-year-old Jason McPherson in Notting Hill police station as he had a brutal drug search of his mouth carried out by ten police officers in January 2007. The film also features moving interviews with Jason’s recently deceased mother, Sandra, and his sister Sam. The film is dedicated to ‘all those that rage against the dying of the light’.

Just days before the vigil, the Assistant Chief Constable of West Midlands Police, Garry Forsyth, issued an ‘apology’: ‘I want to take this opportunity, as we remember your son Mikey on the anniversary of his death, on behalf of the officers and staff of West Midlands Police to say that I am sorry for the pain and suffering this has caused for you and your family. I cannot imagine the anguish and sorrow that you have endured and I hope that the vigil may bring some comfort to you and your family.’ (Read the letter in full here.)

Sieta Lambrias commented: ‘Whilst we appreciate the apology from the WMP for the pain and anguish caused to my family as a consequence of Mikey’s death, we would be far more appreciative of an apology acknowledging that it was the actions of their officers that caused the death, as found by the inquest jury in 2009.’

Other related websites can be seen below: