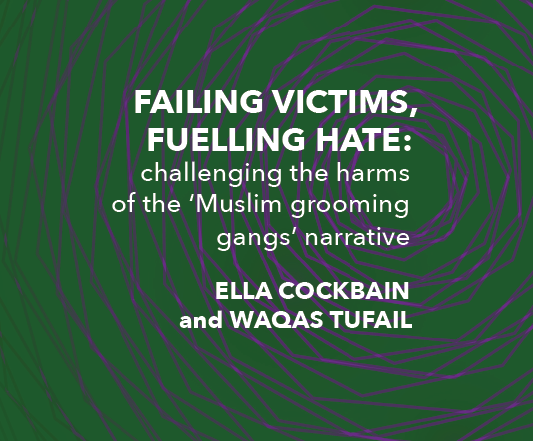 In 2019 we saw the further entrenchment of the ‘grooming gangs’ narrative in the media and in public debate around child sexual exploitation in the UK – a narrative that is has promoted a number of harms both to Muslim communities who are blamed for the crimes of the few and for survivors of sexual violence who are either erased from the narrative, or whose needs are neglected.

In a seminal piece in the January issue of Race & Class, Ella Cockbain, a key researcher of child sexual abuse/exploitation, and criminologist Waqas Tufail, whose research concerns the racialisation and criminalisation of marginalised communities, come together to document the architects of the ‘grooming gangs’ narrative, examine the political backdrop to it and consider the violent impacts it has.

Picking up from where Cockbain’s path-breaking 2013 Race & Class article left off (‘Grooming and the “Asian sex gang predator”: the construction of a racial crime threat’), the authors demonstrate the pervasiveness of the ‘grooming gangs’ narrative and the serious harms it has caused – both in the UK and further afield. In 2018, fifty-two Muslims were killed as they prayed in mosques in Christchurch, New Zealand, carried out by an attacker whose ammunition was inscribed with the words ‘For Rotherham’, revealing just how toxic the narrative is.

Crucially, the authors propose alternative ways of understanding and responding to child sexual exploitation/abuse: ‘We contend that genuinely anti-racist feminist approaches can help in centring victims/survivors and their needs and in tackling serious sexual violence without demonising entire communities’. By sketching out tangible ways forward, drawn from the authors’ expertise as well as from BME specialise support services such as Imkaan and Apna Haq who have long held important campaigning roles in communities, the article outlines ways to prioritise and tackle serious sexual violence, whilst rejecting attempts to racialise the issue.

Order a hard-copy of the journal for £5, plus postage and packaging, here.

Dr Ella Cockbain clearly bases all her work on Muslim grooming gangs from conviction data alone which is ridiculous when only very few victims of these gangs have ever received any justice. Therefore she is not in a position to claim they are not over-represented as she is.
She has also suggested on numerous occasions that Baroness Caroline Cox (who has done far more than anyone else to help a number of these girls) is far right!