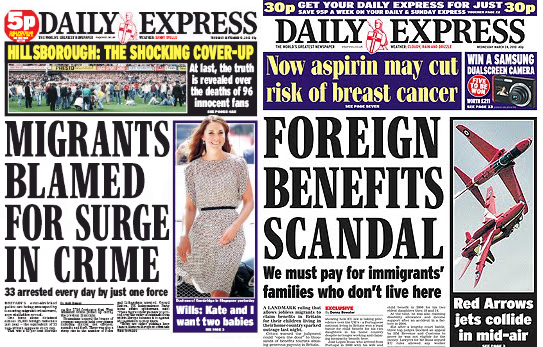 Last week saw the Daily Express carry on its crusade against migration from the EU, in two front-page stories aiming to show that EU migrants are criminal, and taking advantage of an easily-manipulated welfare state. On Monday 10 September, the paper’s front page blared ‘EU blamed for surge in migrant arrests’.[1] West Midlands Police had released statistics that 12,000 foreign nationals had been detained between April 2011 and March 2012. According to the Express, ‘Romanians topped the league of overseas suspects’ and there was ‘a steep rise in the number of Poles and Lithuanians arrested’.

Although the Express’ headline implies a national trend of increasing migrant crime, the figures pertain actually only to the West Midlands. And even that story links migrants to ‘crimes including murder, sex offences, assaults and theft’ without hard evidence. A more likely explanation for this ‘surge’ is that this disproportionate arrest rate is the fallout of the West Midlands police’s crackdown on homeless people in city centres. Birmingham has the highest rate of homelessness in the country, with a 25 per cent increase since 2009.[2] With a council unwilling to seize over 11,000 abandoned homes for affordable social housing,[3] it has been left to the police to deal with the problem. Not equipped to tackle homelessness, they tackle the homeless, using the Vagrancy Act 1824 which criminalises begging.

West Midlands police has, since 2010, announced that ‘beggars’ are to be ‘driven out’ of city centres in Coventry,[4] Wolverhampton[5] and Birmingham.[6] In August, activists from Birmingham Food not Bombs (FnB) stated that, after a dramatic decrease in turnout at a weekly food distribution service, there were reports of police following the homeless and arresting them. [7] A large proportion of the homeless Birmingham FnB deals with are of eastern European and mainly Polish origin. Since a disproportionate number of homeless are migrants from the EU,[8] higher arrests of the homeless would necessarily mean disproportionate arrests of Polish, Lithuanian and Romanian nationals.

When the presence of children forces the authorities to act in aid of homeless families, the rightwing press vilifies EU families for receiving provision. The Express ran another front-page two days later on 12 September 2012 which detailed the ‘rags-to-riches’ story of one Bulgarian family, ‘jobless Rusi Georgiev … partner Mariana Sabeva … and their seven children’, grown fat on state handouts.[9]

By framing the story with statistics that show that ‘371,000 people claiming working age benefits were non-British citizens’, Georgiev and Sabeva were made into tangible examples of a supposed epidemic. As the story developed it became that of a family who, with malice aforethought and a wily manipulative streak, hoodwinked their way into a plush Westminster home three weeks after arriving in Britain. In a separate comment piece, the Express described a process whereby the family deceived their way into free housing, ‘presently snug in a house provided by Westminster Council, just three weeks after arriving from Bulgaria and lodging an asylum claim’:

‘Mr Georgiev bounced [Westminster Council]. He decamped from the emergency accommodation that the Council laid on and began sleeping rough on the steps of Westminster Cathedral.  The Council, conscious of its legal obligations moved in to protect the children from such risky conditions. Clever Mr Georgiev. Entry, asylum claim, and using the children’s safety to push the council’s buttons. Checkmate in three moves.’[10]

The story was inaccurate and misleading. In reality the family arrived in the UK and found themselves with no option but to sleep rough. According to a statement from Westminster Council, ‘The family were taken off the streets by council officers on 22 August’ and ‘were housed by the council for one night before being referred to the UK Border Agency.’[11] Far from decamping from emergency accommodation and willfully enforcing homelessness upon his family in a bid to get an upgrade, he was referred to the UKBA by the council, and placed with his family into ‘an asylum hostel outside Westminster by the National Asylum Seekers’ (sic) service’.

The Express’ campaign was backed by ‘authoritative’ opinion: Tory MP Mark Spencer (a hardliner on benefits)[12] denounced a system that allowed ‘people coming into this country who have contributed nothing’ to get handouts, while ‘people who work hard and fall on hard times find that getting access to benefits is intolerably long winded.’ A system that allows such disparities to develop is, according to Spencer, ‘morally indefensible’. UKIP MEP Gerard Batten is quoted as saying ‘we are essentially inviting every parasite in the EU to come and take advantage of our housing and benefits system’. Westminster Councillor Nickie Aiken, who has previously welcomed the removal of impoverished Roma from Central London,[13] voiced concern that ‘People who come here and demand to be housed or looked after are just adding to the [taxpayer’s] bill’.

The Express’ horror stories did not come out of the blue. On Monday 10 September Iain Duncan Smith attempted to keep restrictions in place against the latest arrivals from the EU – migrants from Bulgaria and Romania. He told the Commons that ‘it is not right for us to end up with a system … in which someone can literally arrive here and, only days after, decide they are not working and therefore eligible for benefits.’ Hitting out against proposals from the European Commission to scrap residence tests for migrants from the EU, Duncan Smith declared his commitment to ending the ‘nonsense’ of benefit tourism. No doubt he has found in the Express a partner willing to prime the public for this campaign.

Read an IRR News story – Clearing Roma off the streets

Having been a volunteer working with Homeless people I have seen an increase in EU nationals who are homeless, This has rise homeless by around 40% and when other EU countries joined the EU I expected this to rise.
This is unsustainable and it is taking away resources from British homeless people. The government needs to get funding from these counties or they should be deported.

There has also been an increase in EU young children in care. This again is unsustainable.

It about time the Government starts working with countries governments, they need to take responsibility of their citizens

To relax our border controls in 2014 will be tantamount to committing national suicide. A country, once proud to be justifiably called “Great” will be submerged beneath the weight of uncontrollable immigration. To be labelled “British” will become a faint memory and will have no significance whatsoever. I fear we have already passed the point of no return.

every body in my town who you talk to are fedup whith the migrants coming to this country. This is the main topic of what people are concerned about yet the politicions do not want to talk about it. They just not interesred what the public want.They all want to rob the pensioners of there bus passers and heating allowance when migrants can come here and cliam bennefits and never have paid a penny into the system What sick country Britian as become

This Government has no interest in listening to the peoples views it seems they cannot do enough to keep the EU happy it makes you wonder if their only concern is to keep a seat on the EU gravy train. It seems that this country is being destroyed on a daily basis,our public services are near to breaking point and still the Government do nothing they are so afraid of the EU.

The migrant situation is now unsustainable and intolerable. How can any of the three main parties support something which is against the interests of this country, with all that is implied for the infrastructure such as NHS, housing, education. A referendum in four years time is too little too late. Does David Cameron really think that he is going to re-nogotiate anything meaningful? I can tell David Cameron now that here is one voter who will not be voting Conservative, Lib Dem or Labour at the 2015 General Election

Iseem to recall that we were only going to admit high quality educated,solvent migrants who would contribute to the country financially not people who are not even wanted by their own country ,Romania must be laughing up its sleeve I challenge anybody to tell us of a good news Roma story with a positive outcome for British society

Look at the british isles on the world map, we are a small island, the rest of the world wants to come here and live. It just can not be aloud to happen. It is only common sense. The educated idiots in parliament will not see it. T B in this country was virtually eradicated but is now rife owing to immigration. U.K.I.P is the only salvation.

Look at the British Isles on the world map, we are a small island, the rest of the world wants to come here and live, it just can’t be aloud to happen, it is only common sense. The educated idiots in parliament will not see it. T B in this country was virtually eradicated, now it is rife owing to immigration. U.K.I.P is the only salvation.