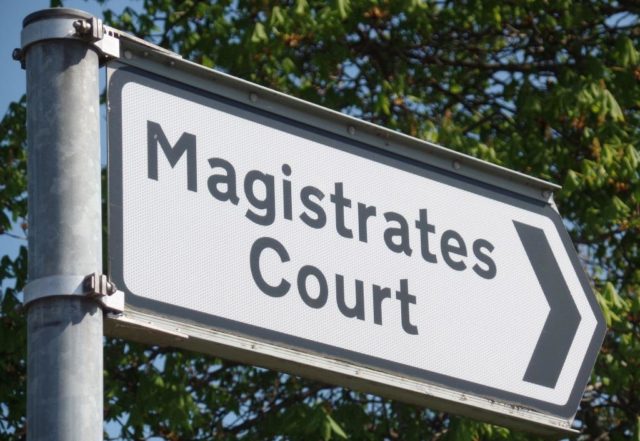 Although the recent conviction of aristocrat 4th Viscount St Davids for ‘menacing’ online hate crimes against Gina Miller rightly received widespread national publicity, many other similar crimes slip by quietly if local media outlets do not publish the details.

Magistrates courts, where the vast majority of hate crimes are prosecuted do not publish individual trial results. The case highlighted here is of particular significance as the victims were resident abroad. Until now it has remained unreported.

In the summer of 2015, before any international responses to the growing tragedy of migrant and refugee deaths on the perilous journey between Turkey and the Greek island of Lesbos in the Aegean Sea, the main rescue and support assistance provided was from courageous and compassionate local residents. As the scale of the ‘crisis’ escalated and more than a million people sought to flee conflict and persecution in Syria and other countries, two people in particular stepped forward to provide and coordinate life-saving humanitarian support. Eric and Philippa Kempson and their daughter are long-time residents of Lesbos, their home facing across the short stretch of idyllic but deadly water to the Turkish mainland and the first landfall for the many flimsy vessels of refugees seeking rescue and safety. In the months and now years that have passed since the initial arrivals, they helped bring to the world’s attention the plight of people arriving, and gave up their ‘normal’ lives to devote themselves to the needs of the most vulnerable – children, elderly, disabled, bereaved, nursing and pregnant mothers, the war wounded and traumatised. Their home became an essential first response centre for rescuers, medics, distribution of emergency provisions. It is impossible to estimate how many would have died but for their and other volunteers’ massive efforts.

Recognition of the scale of the crisis came as the world’s media and NGOs all arrived on Lesbos. But it also brought the worst kind of attention in its wake.

In 2015, far-right agitators on the island were already actively undermining and attacking volunteer rescue efforts and the refugees who arrived, seeking to push the refugees out of sight and away from tourist towns and local amenities. Some sought to scapegoat the Kempson family and other human rights defenders for ‘encouraging’ refugees to come to Lesbos, and have continued a campaign of intimidation and threats of violence against them to this day.

As if local animosity were not enough, a regular British tourist to Lesbos, Richard Sturdy, a ‘respectable’ 72-year-old businessman from North Yorkshire, joined in the abuse, using online social media, Twitter, Facebook and even media interviews to denigrate and abuse the Kempsons. His personalised hate campaign also extended to racially and religiously abusive language against refugees as well as those trying to assist them. This included grossly offensive references to migrants as ‘scum’, ‘rapists’, ‘parasites’, the instructions to ‘electrify the fences’ and ‘sink the boats’ as well as personal attacks. It continued over a long period and many messages, inducing a climate of fear and hostility against the family and those who supported their activities. It put at risk their reputation and livelihood as artists and craftmakers locally and put them in fear for the well-being of their daughter, whom they sent to the UK to study away from the intimidation. She herself had helped save many lives alongside her parents.

With the local Greek police seemingly unable or unwilling to do anything to prevent these online attacks, a complaint was made to the police back in the UK about Sturdy’s actions. His campaign continued unabated even after the shocking murder of Labour MP Jo Cox in June 2016 in her constituency in West Yorkshire. But the rise in hate crimes which culminated in her violent death prompted wider national promotion of the Metropolitan Police’s Hate Crime/Incident Reporting Form, a simple online platform for anyone who feels they are victims of racial and religious abuse.

Even though the Kempsons live abroad the perpetrator was clearly sending his abusive messages from the UK and his location was not difficult to trace via his social media accounts. So the complaint, including a catalogue of screenshots of the many offending comments posted by Sturdy over a period of twelve months, was directed to North Yorkshire police to follow up.

In the first instance the police actions fell well short of a proper investigation. A ‘rural beat manager and wildlife crime co-coordinator’ paid a brief visit to the perpetrator at his home in July 2016, and concluded that there was no crime and nothing further to pursue. The failure to investigate was compounded by the constable acting as a messenger in passing on a threat of legal action from Sturdy. His abusive messages continued.

Undeterred and with the assistance of volunteer lawyers in the UK, a further and more detailed complaint was made, this time about the investigation itself, to the Chief Constable and also to the regional Police and Crime Commissioner, seeking a review of the initial investigation and conduct by the local constabulary.

To the full credit of North Yorkshire Police, the case was re-investigated from the start by a senior officer and more information sought, statements taken and the lengthy catalogue of abusive messages reviewed in detail. Nearly twelve months after the initial complaint, after consideration by the North Yorkshire Police lawyers and the Crown Prosecution Service, it was decided that criminal charges could be brought on several counts. Along the way, due to the length of time that had elapsed with the investigations, some of the messages were too old to prosecute because of statutory limitations. Others, fortunately, were still within time.

And so, winding forward to May 2017, after nearly two years, a 72-year-old company director from Ripon, North Yorkshire was prosecuted on two charges: racially and religiously aggravated harassment, and the sending of a malicious communication. At his trial on 25 May, Sturdy changed his plea to guilty on all charges and received a community rehabilitation activity order, was made to pay victim and court costs and subjected to a restraining order not to contact the victim (this non-custodial sentence reflected credit for a guilty plea).

The defendant was held by the court to have ‘pursued a course of conduct which [he] knew or ought to have known… repeatedly targeted and harassed [the victim], and the offence was racially/ religiously aggravated within the terms of sections 28, 32 (1) a and (3) of the Crime and Disorder Act 1998’. Additionally, he ‘sent by means of a public electronic communications network a message that was grossly offensive or indecent, obscene or menacing contrary to sections 127 (1)(a) and (3) of the Communications Act 2003’.

The importance of naming and shaming

Magistrates’ court cases are usually reported in local newspapers shortly after trial, but three months later nothing has appeared in the several local and regional papers about the offences (although the local papers did interview him in his role as the chairman of a local agricultural show two weeks after his conviction). Other local crimes, such as shoplifting, drunk and disorderly behaviour etc, have been reported since his trial and those defendants named. But there has been a silence around these hate crimes locally, as if the embarrassment of it cannot be named. Indeed it is exactly the kind of insidious crime that brings shame not only on the individual and their family but also on the local community, the companies and associations they are part of. Nothing has been reported either, on the regional police website, although most local police websites contain news of successful cases. This is particularly striking since hate crime awareness is stated to be one of its policies. In the absence of any published news on the case, despite requests to local newspaper editors and the police to report it, a formal application to the legal advisers to the magistrates court was made and agreed for disclosure of the (redacted) trial record details. Otherwise such cases would pass by entirely unnoticed. If hate crime is to be tackled, awareness of successful prosecutions is vital, both to discourage those actions in the first place and to give other victims the confidence to step forward.

Whilst this is an article primarily about one particular case, it is reported in detail because it has major significance. Although the sentence was at the lower end of the scale because of the defendant’s guilty plea and previous good character, he was convicted for a persistent campaign, not just for the personal abuse against his victim, but because of the characterisation of refugees, migrants, Muslims and volunteers in a racist and religiously discriminatory and hostile manner. It is also of importance because it clearly demonstrates that the national police online race hate reporting scheme can work, and that it does not require the victim to be situated in the UK.

It also demonstrates that the police, though initially falling short in their own conduct, did ultimately take on the investigation and prosecution of the case diligently with the Crown Prosecution Service. Indeed the silence around hate crimes underplays the success of such trials. The most recent published statistics show that racially and religiously aggravated crimes form 84% of all hate crime prosecutions and that out of 15,442 hate crimes prosecuted in 2015/16, 74% resulted in guilty pleas because of the strength of the evidence against the defendant – so the vast majority of victims do not have to go through the additional anxiety and trauma of giving evidence at trial.

Sadly, hate crime continues to rise alarmingly but police and prosecutors do now seem to be recognising the insidious nature of such action and the importance to community cohesion of treating these crimes with the full vigour of investigation and prosecution even when they are directed against persons abroad and those without a voice. Greater openness by the courts, media and enforcement agencies is needed, by regularly publishing the circumstances of these cases, turning them from bare numbers into real life situations, so that awareness of the damage caused is clear to all and makes it as unacceptable online as it is in the street – and that there is no impunity, even for a ‘respectable’ member of the community.

This article has been written under a pseudonym.

Great, Bravo, Really valuable to step forward and defend the victims of these on line agressions. This particular active hater was definitely effecting the thinking of volunteers on the island who could not help but be aware of his excesses, and who had to wonder if the fire he was trying to start might flame up at any moment. There was a lot of tension between the various populations on the island , the volunteers the Molyvo’s tourist bureau people and the refugees and it was reckless and provocative and potentially dangerous to be spewing hate into that mix. Thanks to all who took steps to see and understand what was going on and those who had the influence to curb his activities.. To bad he did not apologize to the victims of his tirades.

I am so glad to know that he is being held accountable for his actions.

This unpleasant individual has done his damnedest to make the Kempsons’ life a living hell. His punishment in no way reflects the damage and hurt he has caused, and the failure of his local media to report it is shameful and cowardly.

The truth hurts, Richard Sturdy was entitled to his viewpoint and the CPS clearly at fault to prosecute him for what is in effect his opinion.