Expanding solidarity and raising funds for the Gilets Noirs. 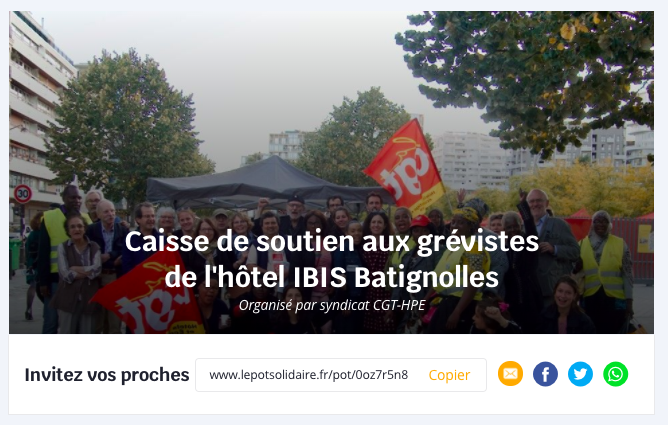 Before the Covid-19 lockdown in France the Gilets Noirs, the headline-grabbing protest movement of sans-papiers in France, were continuing to break new ground and finding exciting ways to sustain their effort through the innovative ‘solidarity pot’.

There can be no doubt that the Gilets Noirs are a formidable ensemble. Their occupations and protests certainly seize the media’s interest and draw attention to their precarity, but they also put them in the firing line. By exposing their exploitation, they are highlighting their perilous status and leaving themselves vulnerable.

The violent consequences of putting your head above the parapet were seen very clearly after the impressive occupation of the Pantheon in July 2019. The burial ground for the great and the good of France, the Pantheon was taken over by 700 protesters, joined by some Left members of the National Assembly including Daniele Obono, Eric Coquerel and Esther Benbassa, calling for a meeting with prime minister Edouard Philippe. But the peaceful protest ended in dramatic violence when police stormed the Pantheon, launching four charges which injured forty people, and making thirty-six arrests. Nineteen of those arrested were held in detention centres to await deportation, showing the very real dangers of these actions.

Another group of Gilets Noirs putting themselves on the line, but gaining fewer headlines, are hotel workers. In the same month as the Pantheon occupation, chambermaids at a north Paris Hotel Ibis began an indefinite strike against their deplorable working conditions and the hotel’s use of subcontracts (see an IRR News story here). The strikers described the outsourcing as abuse: paid by the room, rather than by the hour, unlike those employed directly by the Hotel’s Accor group, they were required to clean an impossible 3.5 rooms per hour for their €1,300 monthly net pay, forcing them to work hours of unpaid overtime.

The new meets the old – solidarity in action:

The financial implications of strike action mean it is not taken lightly by any worker, let alone low-paid precarious workers. To support themselves whilst they are without pay during their strike, the chambermaids, like other strikers, have a collective fund – which includes contributions from those on strike themselves as well as impressive donations from other organisations in solidarity. The fund recently received an amazing €15,000 from a collection of organisations: the CGT (General Confederation of Labour) national trade union, the CGT’s Goodyear chapter, and striking postal workers (Sudposte Hauts-de-Seine). Such donations are a real financial lifeline for those on strike, and an emotional boost showing real support for their movement. But the hotel workers took things one step further, setting up a solidarity fund on the platform ‘Le pot solidaire’. Over 1,700 contributors have donated to date to their ‘Caisse de soutien aux grévistes de l’hôtel IBIS Batignolles’.

The Pantheon protestors also took to the internet with a ‘solidarity pot’ to raise money for legal fees for those arrested during the occupation. Their target was €31,039, to contest the detentions and expulsion orders, and for legal fees to file a claim against the police. The target was met and surpassed, with 791 donations totalling €36,202 at the time of writing and increasing daily.

The Gilets Noirs have increased their chances of success by creating a public space where anyone can show their solidarity and support for their actions. By opening their campaigns to society, they receive more vital financial support to maintain their strike, as well as increasing the reach and scope of their campaign. Online platforms like Le pot solidaires also act as an alternative media source, where the Gilets Noirs can speak for themselves, present their own understanding of events and raise awareness, even when the mainstream media will not cover their cases. It is much harder for management and the state to dismiss their actions as those of an insignificant minority when they are receiving thousands of donations to keep going. The online ‘pots’ have a far greater reach; people nationally and even internationally can give to show their support and solidarity for the Gilets Noirs movement and their actions.

Beyond the Gilets Noirs

This type of direct action is powerful and effective, it allows for legal support to be paid for and gives some stability and security to striking workers. It is a way to reclaim some power from the state. And it could be extended into other realms. We have seen several high-profile cases over the last few years, with people facing increasingly draconian charges for their humanitarian work throughout Europe in assisting refugees. The amounts needed to finance a defence can be crippling. Salam Aldeen, the founder of Team Humanity Denmark, lost his home whilst awaiting his first trial. Sean Binder, one of the volunteers charged with espionage in Greece, had family members move to Greece to be near him whilst he was in pre-trial detention. All too often this financial burden is borne individually by those arrested. One case that did garner solidarity was that of the Stansted 15, where a solidarity fund was created to help fund trial expenses. This sort of action should be replicated, so that when the state tries to make an example of a humanitarian actor, they don’t have to shoulder the burden alone and we, the public, can show our solidarity and support.

As part of France’s nation-wide lockdown to slow the spread of Covid-19 hotels were requisitioned by the state and are now either lying empty or being used as homeless shelters, making the future of the Hotel Ibis-Batignolles chambermaids’ strike unclear.  A member of the strike, Sylvie and Claude Levy, a representative of the CGT-HPE union, took to their Facebook page at the end of March to say that they have put pressure on their employer to include them in the ‘partial activity’ scheme (1) for the duration of the lockdown and will resume their strike action at the end of confinement. Whatever their future, what they have achieved is to demonstrate the importance of solidarity – a much-needed lesson in these times.