Excessive use of restraint during charter deportation flight

A new report by the Chief Inspector of Prisons on an inspection of a 2017 charter flight deporting people to third countries makes for horrifying reading. 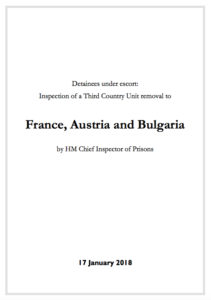 The report, Detainees under escort: Inspection of a Third Country Unit removal to France, Austria and Bulgaria, which is only seventeen pages long, is full of disturbing information on how a group of twenty-three people were treated during deportation — essentially like animals being transported or cargo being moved from one place to another.

The basics first: the charter flight took place in February 2017 from London Biggin Hill and travelled to France, Austria and Bulgaria. The escort contractor Tascor (which is part of Capita plc) provided eighty escort staff to twenty-three people being deported (a ratio of roughly three escort staff to every person being deported). There were also two health care staff on the flight.

In his damning introduction, the CI, Peter Clarke, says:

‘We had serious concerns about the way that this operation was conducted, principally around the excessive use of restraints. Nearly all detainees were placed in waist restraint belts for the entire journey. The documentation and our own observations showed that, in many cases, restraints were not

necessary, proportionate or reasonable. Detainees’ compliance was not tested during the journey, and restraints remained in place for longer than necessary. We regularly inspect other detention settings where far more disruptive and challenging behaviour is managed without such physical restraints.

This is not the first time that such concerns have been raised. The Independent Monitoring Board (IMB) — which, like HM Inspectorate of Prisons, is a member of the UK’s National Preventive Mechanism – routinely monitors charter removals. The IMB monitored a third country removal to Germany in June 2017. All 30 detainees on that operation were placed in waist restraint belts at the immigration removal centre (IRC) from which they were collected.’

The briefing for escort staff ’emphasised the risks of disruption’ and ‘focused solely on control and not on detainees’ treatment or welfare. Staff clearly thought they were dealing with a very high risk group… dire warnings were not grounded in evidence.’

‘After take-off, some belts were moved from the secure position (where hands are clamped to the waist) to the restricted position (hands can move freely from the elbow, but arm movement is restricted). Other than this, the use of restraints was not reviewed regularly, and all detainees remained in restraints until disembarkation.’

This was a thirteen-hour flight (not including the journey times from Brook House and Colnbrook detention centres and waiting times at the airports).

There was a lone woman on the flight, with twenty-two men, and according to the CI:

‘The treatment of the single female detainee was concerning. The detainee was assessed as vulnerable and being at risk of self-harm or suicide. She was transferred in her pyjamas, slippers and dressing gown and a waist restraint belt, despite a lack of evidence that one was required or proportionate. She was distressed throughout the flight.’

The CI also found that ‘staff spoke to each other in loud and jocular voices over the heads of detainees. One escort loudly said to another that the detainee she had been allocated, “tried to be a bit of an arse but soon realised there was no point”.’

One of the most important recommendations from the report reads:

‘Staff should only use force against people under escort as a last resort. Any use of physical force, waist restraint belts or handcuffs should be planned and sequenced, and limited to situations where it can be justified. Restraints should be removed at the earliest opportunity. Escorts should behave in a professional, calm and measured way at all times.’

This recommendation will no doubt be ignored if history is anything to go by. The introduction to the report reveals that concerns have previously been raised by the IMB about an earlier charter flight where all thirty passengers were restrained in waist restraint belts at the detention centres — even before they had boarded the plane. And now, this most recent inspection finds ‘nothing had changed’.

These deportations are the end point of the hostile environment. What is missing is the impact on the people deported whose only crime had been to seek asylum. What happened to the twenty-three?

How is it that in the twenty-first century the British government is still shackling people — reminiscent of slaves being transported some 300 years on. Reading this report it becomes clear that it is only a matter of time before there is another death like Jimmy Mubenga or Joy Gardner.

IRR News: Could Jimmy Mubenga’s death have been prevented?

Detainees under escort: Inspection of a Third Country Unit removal to France, Austria and Bulgaria by HM Chief Inspector of Prisons can de downloaded here.