The Institute of Race Relations is releasing a free download of A. Sivanandan’s landmark essay, ‘From resistance to rebellion: Asian and Afro-Caribbean struggles in Britain’, first published in Race & Class in 1981.

Detailing the resistance of black communities to the discrimination of the British state, Sivanandan reminds us throughout that acts of resistance are made necessary by the realities of everyday oppression. The pattern of black and Asian struggles in Britain, writes Sivanandan, ‘was set on the loom of British racism’. And resistance may not always take conventional forms. 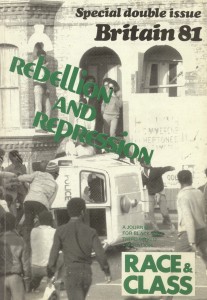 With the ongoing and excessively punitive sentencing of those involved in last August’s unrest, we are hearing from the rioters in Tottenham that continual aggressive stop-and-search measures makes them feel policed against, not policed for. Sivanandan’s words thirty years ago are still as pertinent today:

Politicians would have us believe that the unrest in 2011 was sparked only by the crass consumerist impulse of those involved. But, in a capitalist society, as Sivanandan wrote, ‘the line between politics and crime, after all, is a thin one’.

From the ‘acceptable exploitation’ in employment, to the ‘overt and sanctioned’ colour-bar on housing, to the police’s ‘nigger-hunting’, Sivanandan maps the history of state racism and the black and Asian struggles it provoked. There is a continuity of struggle which is important to recall and learn from.

Download a copy of A. Sivanandan’s ‘From resistance to rebellion: Asian and Afro-Caribbean struggles in Britain’ here (pdf. file, 2.4mb).

Read more about Race & Class or subscribe to here

Siva has been one of the key commentators on race and class in the UK over the last 40 years. this essay is a must read

This is still the best analysis of post-war race relations in Britain in my opinion: brilliantly argued and elegantly written. A must-read indeed.

There are good and bad people among black and white people. It is the corrupt people of all both groups who pose problems for the decent people of both groups and often set them up to fight. To lump all black people together is simplistic and categorises people by colour and not character which is an important distinction to make. It is a distinction that the Rev. Martin Luther King made in his famous “I have a dream” speech in the sixties.

Ralph Ellison’s award winning book, The Invisible Man also showed the complex nature of race relations and demonstrated that there are no simple answers. Black people are just as capable of betraying black people and causing them suffering as are racists. We only have to read Alex Haley’s Roots to see how some black people were sold into the hands of racists by other black people for money. Some Asians have also beaten down other Asians for money in history. People are complex and our struggles are complex.

For example, I know of a practising Muslim woman who was slandered widely after she fell out with a couple of wealthy people. She was slandered as a terrorist and a tart and an illegal immigrant and the wealthy people were able to use their wealth to get people of her own ethnicity who she did not even know to slander her widely so she was lied about by recent migrants, minority people in debt, criminals from the minorities, etc. Most of these people didn’t even know her.

This woman’s home was bugged by racists under the pretense of watching the terrorist and she was terrorised in her own home with normal things she was saying and doing in her own home being pounced upon and twisted in order to make up lie after lie about her. ( This was a woman with a 30 year exemplary work and school record who went to a top 6 university and was well behaved all her life). Her reputation destroyed ( despite having lived an innocent and blameless life), she ended up being the convenient scapegoat for every corrupt person in the workplace and was driven out of work, refused jobs she would have otherwise got and basically, blacklisted on complete LIES.

She could not get married and have a normal life and has ended up umarried and jobless at 40 despite going to an ivy league university and doing well at work.

This woman was shunned and made into a pariah owing to this new, sneaky, covert but deadly form of racism and she has suffered terribly physically in recent years and suspects she has been harmed through the NHS and in other ways to frame her and even to take her life.

She also has strong reason to suspect that people were harming her each time she criticised them even in her own home as she would get sick soon afterwards despite having been in very good health before the hate campaign started.

What kind of help is there for this woman?

P.S. If racists are infiltrating and targeting minority people and natives who they have fallen out with through the NHS, this has wider implications for the whole of society so it would be in everyone’s best interests to investigate her case. This is an innocent woman who has suffered terribly for fifteen years.

I wrote to this website a few times about why they are obsessed with race issues and never mention class, when the magazine they write and produce is called, rather bizarrely, ‘Race & Class.’ I got one answer but when I wrote again about a piece I had written for my blog, which was about Middle class prejudice amongst other things, they never got back to me. I asked the question of why white Middle class people seem obsessed with racism and gay issues, and many other issues, but are totally silent when it comes to issues of class, especially white working class people in Britain. I have as yet not got any kind of satisfactory answer. It seems to me that, like racists who have a problem with Black people or Jews or whoever, many Middle class people are equally as prejudiced and as dismissive of white working class people. Instead of admitting this however, they pretend just to be politically correct and interested in the rights of Black people, gay people, immigrants, when the truth is that this is just a smokescreen so they can climb the greasy pole and use their Middle class influence to better their lives often selfishly WHILST proclaiming at the same to be PC and believers in equality.

There is no selectivity in equality; you either believe in equality for all, or in the end you practise double-standards and division, just like the racist or common-or-garden bigot everywhere.

I don’t suppose I’ll get a reply, but here goes: can some politically correct Middle class person explain to me, simply and briefly, why so many Middle class people proclaim selective equality for some groups whilst studiously ignoring the rights of some others? I’m just curious…