Marc Willers QC, remembers one of the UK’s foremost authorities on Romani Studies and campaigner for Gypsy rights. 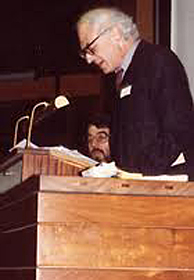 It was with great sadness that I learnt that Dr Donald Kenrick had recently passed away. I first met Donald over twenty years ago, whilst he was acting as an unqualified planning consultant for a Romani Gypsy family that was trying to obtain planning permission for their caravan site in Kent, in the face of local opposition. I worked with Donald on a number of other similar cases and soon came to appreciate that his knowledge of the history of the Romani people was unique and that his commitment to the preservation of their language and their traditional way of life was exceptional.

Donald wrote extensively about Romani Gypsies and his best known books include: Moving On: The Gypsies and Travellers of Britain (1998); Gypsies: From the Ganges to the Thames (2004); The Romani World: A historical dictionary of the Gypsies (UH Press, 2004); Gypsies under the Swastika (2009). But Donald was not just a renowned author, he was also a polyglot, able to translate from over sixty languages, and speak about thirty of them, mostly fluently. Using that exceptional skill, Donald helped preserve and promote the Romani language, by translating numerous publications and acting as the official interpreter at many international meetings.

I never actually met Donald Kenrick in person – but he was a great and lasting influence on my life.
It was in 1999 when I first began to work with Gypsy and Traveller communities. My knowledge at this point was very limited to the media’s stereotypical presentations and to my own vague recollections from childhood of Gypsy booths at funfairs and sea-side resorts.
To update and expand my knowledge I went to Liverpool’s largest branch of WHSmiths . I came out of the store shocked and gob-smacked to have found, that out of a range of 100s of magazines and seemingly 1000s of books…I could find NOTHING at all the related to Gypsy and Traveller families as being a part of everyday life in Britain…there was no representation at all. The closest I found on that visit was a magazine in the holiday section called ‘Camping and Caravanning’…. and a pulp paperback about a bare knuckle fighter.
In something of a daze, I made my way to Liverpool’s Central library, hub of academia and a rich source scholarship. I was right, the catalogue indicated that there were two publications available: one out on loan, and the other was ‘On the verge: The Gypsies of England’ by Donald Kenrick. I took it home with me, and thus begun my education.
A short while later I joined the Trav-Net discussion group were Donald and Len Smith and many others were regular contributors. For me this was like undergoing a university course – such was the wisdom, knowledge, humour, common sense and passion of the groups contributors. One of the most important things I learned from this was to ‘keep it real’. Yes, Donald was a gifted and well respected scholar…..but he kept it real by staying close to the community and using his knowledge to help further the cause of equality and social justice. I never met Donald but I am fortunate to have benefitted from his work. God bless you Donald, rest in peace.