Disquiet over ‘shameful’ policing of racial violence in Brent 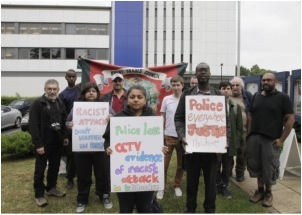 A protest was held outside Wembley police station last week, after CCTV evidence of a brutal attack was ‘lost’ by the police.

Early in June, a Moroccan man in Willesden, north London, was beaten in an unprovoked violent attack. A car pulled up next to him as he was walking down the street with his friend. Five white men jumped out, punched him to the ground and kicked him repeatedly whilst he was lying prone. As passers-by intervened, the men fled and the victim was hospitalised. Speaking to IRR News, he explained, ‘I was punched in the face, around the eyes, I had injuries from where my head was hit to the floor. I was hit so hard that a tooth broke. It later had to be taken out.’ 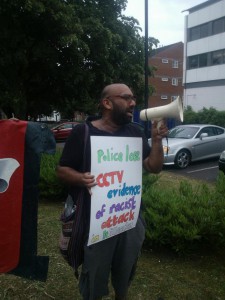 One of the men who came to his assistance, a local trade unionist Robin Sivapalan, later went round local businesses to see if any CCTV had recorded evidence of the attack. One had recorded the entire incident. Police were then informed of the existence of the evidence and they were told that although the footage would automatically be deleted after a few days, it was at that point retrievable. By the time the police collected it, over a week later, some of it had gone. It was one of a series of errors which local campaigners have described as evidence of a ‘shameful’ disregard for racial violence victims. They claim that the attack was not initially classified as a racist incident, that it took the police nearly a week to contact the victim and that an appeal for information eventually put out by the police had given the wrong time and place of the incident.

Since the demonstration and a subsequent meeting with the police, the attack has been re-classified as a racist incident. The police have now told the local paper that ‘other CCTV enquiries have continued’, but that the victim is ‘unwilling to assist police with our inquiries’.[1] According to Robin Sivapalan, ‘It is a measure of how important they see the issue, how they react to it, which is unsurpsingly unapologetic, blaming of the victim, and shows little promise of changing.’ The victim himself, meanwhile, says he wants ‘justice … not just for me, but so that there is less chance of this happening to anyone else’.

The significance to the death of Stephen Lawrence was the actions of the police was finally looked into. The conclusions documented in the McPherson Report is well known to us.

If the contents of the article above did happen, then very little progress has been made since the McPherson Report.

This is very sad indeed. Every government since that report was published is responsible for the reprehensible behaviour of the police as detailed in the article above.

Brent Police has been talks on our crimes however there is no guaranteed attack over crimes reducation…refusal to race relations without the law…we need to new law for all equal under the Government Policy for us. Human Rights will be privileges on us view on this CCTV & Witness expertised.