‘Good times bad times’ dismantles popular myths about the welfare state, and looks at the implications of them.

The more the Conservatives’ ‘moral mission’ to radically transform the welfare state is entrenched, the more it relies on the humiliation of the poor, the suppression of dissent and denial of lived reality. This can be seen in the way the Work and Pensions Secretary, who likens his benefit ‘reforms’ to a fight against slavery, has tried to stop even the most technical, internal criticisms of the universal credit scheme being made public. It can be seen in the way he has been rebuked by the UK Statistics Authority for misusing statistics about the benefits cap, and has ‘misled parliament’ when debating his welfare plans. And it is reflected in the staggering increase in numbers of people turning to food banks, as well as the contempt shown for them. That this ‘morality’ leaves a death-toll in its wake is well known. But for those driving the welfare reforms, the harm caused to its direct recipients is little more than collateral damage. The prime minister’s response to the mildest criticism about scapegoating people on benefits is to reject it: it is not fair, he says, to pay people to ‘stay idle’. 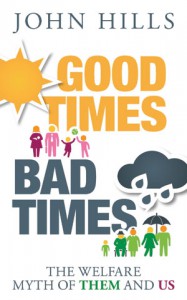 The fallacy of such an argument, in which the population breaks down neatly into those who contribute to the welfare budget and those who take from it, is the focus of John Hills’ book Good times bad times: the welfare myth of them and us. Such a view, he discusses, sustained through the perception of a welfare state existing solely as an ‘industrial-scale modern day “Robin Hood”’ – redistributing from the rich to the poor – is of course entirely false. But it has real implications. By misrepresenting what the welfare state does, the fact that we are almost all ‘considerable beneficiaries’ of it is lost. ‘[P]olitical and media discussion often leaps from … the welfare state as a whole, including the NHS, pensions and schools’, he argues, ‘to policy around only social security, or around the far narrower (and pejoratively used) concept of “welfare”, in the US sense of cash payments to working-age people who are out of work’. The mystification of reality is achieved through invectives against a demonised, stereotyped few.

Given its focus on welfare myths, the fact that Good times bad times has no real analysis of ‘race’ is surprising. The prime minister’s assertion that it is necessary to ‘tackle welfare dependency’ in order to cut immigration – with the assumption that immigrants take up jobs that those he vilifies as ‘idle’ should be doing – is now a Conservative mantra. The demonisation of welfare recipients in conjunction with the demonisation of certain categories of migrants has elevated the creation of hostility to political strategy. Additionally, the 50 per cent increase in people from black, Asian and minority ethnic backgrounds experiencing long term unemployment suggests they have been ‘cast aside’ by the coalition; and the extent to which the ongoing austerity measures marginalise those from black and minority communities is clear. Like many others, such as for example the disabled and the homeless, they are part of the fierce fights of resistance to welfare cuts.

Nonetheless, Good times bad times is a book that contains important insights. It is a detailed, technical, descriptive text. But it provides a wealth of evidence to show how the welfare state can operate over a lifetime. Its myriad diagrams and discussions are reinforced through focusing on two fictional families, showing how they interact with the welfare state over the course of their lives. In 1989, the investigative current affairs programme World in Action broadcast Spongers, a spoof game-show featuring the stereotypically middle-class Osborne family and the stereotypically working-class Ackroyds. The programme showed how it was the Osbornes who gained most from the welfare state over their life times, contrary to the claims of those, like today, who wage vitriolic diatribes against the poor. Good times bad times, taking these families’ descendants in current contexts as a focus, shows something similar – albeit not quite. As Hills argues, if reduced to simple economics, most people, on average, receive from the welfare state close to what they pay in throughout their lives. Rather than simply redistributing wealth between different groups of people, it works to ‘smooth’ out incomes over life times. And it is in this context that the welfare state faces its real challenges.

From tackling myths to revealing truths

If Spongers was made in 1989 when the neoliberal revolution was in its infancy, Good time bad times speaks to the world this revolution has finally created. ‘Zero-hour’ contracts, Hills reminds us, have proliferated. The growth in ‘self-employment’, particularly since 2008, disappears people from unemployment statistics whilst masking a reality of ‘highly variable … casual work, with very variable hours’. A ‘low pay, no pay’ cycle encapsulates something about an economy officially described as a success, but which is often experienced as repeated moves in and out of employment, with uncertainty as the norm. At the same time, levels of inequality skyrocket. And as Hills states, this means the welfare state ‘is left with more to do’ if it is to have any kind of redistributive impact. ‘[W]e still end up as one of the most unequal countries in the rich world’, he argues, ‘because there is so much inequality in the incomes people receive from the market compared to elsewhere’.

Here, Good times bad times is most valuable. For by dismantling some of the most persistent welfare myths, it points, in the process, to some of the realities these myths work to conceal. ‘The overall share of income going to the poorest fifth fell considerably as inequality grew between 1979 and 1996’, Hills says, ‘and simply stabilised between then and 2010’. That the income share of the top tenth grew, ‘squeezing everyone else’ in roughly the same period points to the extent to which ‘if anyone has got too expensive, it has, in fact, been the rich’.

From this perspective, it could have perhaps helped if the book broadened its remit to reveal what is in effect a corporate welfare system – the multi-billion pound subsidies enjoyed by corporations. That would point to some of the ways in which political rhetoric on welfare rarely touches on Britain’s other ‘welfare state’.

Ultimately though, at a time when the welfare state is under attack, Good times bad times is a valuable primer: providing information on the ongoing and intensifying upward transfer of wealth and resources and the rhetoric about welfare deployed to conceal and justify it.

Good times bad times: the welfare myths of them and us is available from Policy Press, here.