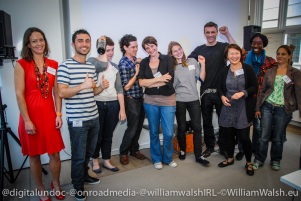 ‘Who gave you permission to be here? Can I see your forms? You haven’t filled them in properly. You shouldn’t be here. Fill in this form. The one you’ve used is the wrong colour – fill in this one. This is rubbish. You’re in the wrong place!’ The hundred or so people sitting round the tables at the Kings Cross office of the Paul Hamlyn Foundation (PHF) were shocked, scared, bemused and confused as they were shouted at, besieged and interrogated by the officious young people surrounding them. After ten minutes, the bombardment stopped and the group, Refugee Youth, introduced themselves. They had succeeded in their aim of making participants feel something of what young undocumented migrants are made to feel in encounters with authority.

It’s not only when you travel that you need a passport. Immigration status increasingly impinges on all areas of life. Opening a bank account, getting a job, going to college, even (in some areas) going to school, getting medical treatment – these are just some of the situations where you might be asked for proof of your immigration status. But for many undocumented young people who have lived in the UK for most of their lives, or might even have been born here, it comes as a nasty shock when they discover they’re not British, and can produce no document which says they have a legal right to be here.

The generation of useful, practical tools to help young undocumented migrants navigate their encounters with authority and reduce their isolation and fear through the use of social media, was the idea behind the event, held in July over two days as part of PHF’s Supported Options Initiative. In groups of eight, participants sought to use the mix of technical, legal, social and entrepreneurial expertise available to respond to real issues raised by the migrant activists, by devising digital tools which could be developed with the use of prize money – £5,000 for the winner and two runner-up prizes of £2,500. Six questions or ‘fields’ were identified by the organisers, embracing situations from arrival through getting good legal advice to building trusted connections to coping (if necessary) with departure. Participants worked on the question or issue they had picked, then each group pitched their idea to a panel of judges who were representative of those at the event.

Perhaps not surprisingly, the winning pitch dealt with access to legal advice, since getting decent advice is so crucial to the future of undocumented young migrants. Those who were born in the UK are entitled to British citizenship after ten years here. But they have to apply – and so knowledge of the right to citizenship is clearly essential. For those without the right to citizenship, it’s becoming increasingly difficult to regularise status, with rights to stay curtailed in response to the anti-migrant and anti-human rights lobby – but avenues are there; again, they need to be explored with the help of good legal advice. But from April 2013, no publicly funded legal advice will be generally available for immigration cases. The winning entry addressed this imminent loss of legal aid by designing a secure, online referral system to a source of funding for exceptional cases post-April 2013. One of the runners-up used text messaging to provide new arrivals with useful information in their own languages, while the other was an app and website providing a secure, confidential and anonymous chatroom where users could support each other.

While the winning groups use their prize money to develop their projects over the next six months, PHF is keen to stress that there may well be development and funding opportunities for other groups, inspired by Undoc Camp or already engaged in work among undocumented young people. Those with ideas which might lend themselves to digital development should get in touch with Sarah Cutler at the PHF, at undoc@phf.org.uk.

Details of the pitches presented at the camp can be seen at the Digital Undoc site.