The IRR publishes a disturbing new report, Unwanted, unnoticed: an audit of 160 asylum and immigration-related deaths in Europe, revealing the extent of Europe’s departure from its vaunted humanitarian ideals. 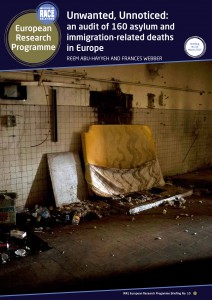 The deaths over the last five years, in the detention and reception centres, the streets and the squats of Europe, are a product of the rightlessness and the lack of human dignity European governments accord to migrants and asylum seekers. They are also the tip of the iceberg; the true figures are unknown, as in many countries migrants’ deaths are not recorded or investigated. But of the deaths whose circumstances are known, the largest number, sixty, were suicides; 26 were caused by untreated illness or illness exacerbated by detention, while sixteen were caused by destitution.

Liz Fekete, Director of the IRR, said, ‘Some lives simply don’t matter. These deaths reflect exactly the same indifference to human life that we see at the border … this suffering, these deaths need to be accounted for.’