This week, families and campaigners gathered outside the London offices of the Crown Prosecution Service (CPS) in protest at its ‘inaction’ over deaths in custody cases.

A number of families told of their experiences. Saqib Deshmukh spoke on behalf of the family of Habib ‘Paps’ Ullah who are awaiting a decision at the end of this week from the CPS; Marcia Rigg made an emotional speech about the police officers involved in the death of her brother, while Stephanie Lightfoot-Bennett recalled the brutal death of her twin brother, Leon Patterson, in Stockport police station in 1992. Campaigner Minkah Adofo warned against complacency despite recent (welcome) CPS decisions to charge the police officer who unlawfully killed Azelle Rodney and the three G4S officers who were also found at his inquest to have unlawfully killed Jimmy Mubenga during a deportation.

The demonstration was organised by the United Families and Friends Campaign, the coalition of those affected by deaths in custody. 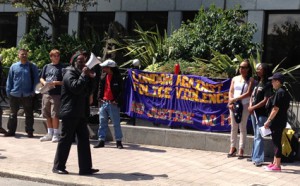