In the April 2013 issue of Race & Class leading UK thinkers, in a special section on Cuts, crime and racialisation, examine how neoliberalism, at a time of austerity, changes the very nature of racism and criminal justice.

The young unemployed, often excluded from every institution and avenue, are unwanted. The dragnet of Joint Enterprise, examined here by Lee Bridges, serves to corral them. The Asian grooming narrative, analysed by Ella Cockbain, presents the white working class as racialised victims. While the very real daily racial harassment and abuse of ethnic minorities and migrants, researched by Jon Burnett, are now rampant in areas devastated by industrial decline are ignored by politicians and the media. Meanwhile, as Frances Webber argues in ‘Dismantling racial justice’, recourse to judicial review of human rights abuses is being curtailed as legal aid is withdrawn. 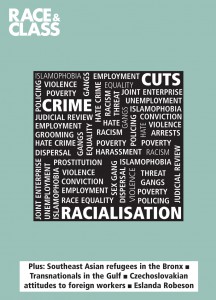 Other contributions examine how areas of the Bronx have been ‘saved’ by incoming refugees, the way that ‘statism’ influenced attitudes towards Vietnamese workers in Czechoslovakia and transnationals in the Gulf.