Eddie Bruce-Jones, in ‘German policing at the intersection: race, gender, migrant status and mental health’, shows how a cultural defence, of ‘legitimate’ fear of the violence and unpredictability of the ‘other’, is used to justify the recent controversial shooting dead of black Germans by the police – in a country which is reluctant to accept racism as a problem and keeps no statistics on discrimination. Ryan Erfani-Ghettani’s commentary on the media’s demonisation of Joy Gardner (killed during a deportation attempt in the UK in 1993) reveals the ubiquity of this villification. Harmit Athwal’s article, ‘“I don’t have a life to live”’, uncovers the murky world of the detention estate where the crime of being a refused asylum seeker evokes the punishment of indefinite incarceration, poor care, the threat of deportation and the inevitable resort to self-harm. 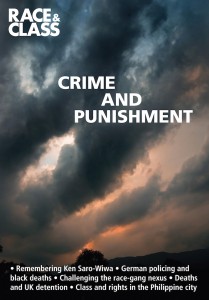 The idea of ‘Criminalising the Other’ is continued in Patrick Williams’ thorough denunciation of the way that academics, the media and especially the police have created a convenient ‘race-gang nexus’. Drawing on his research, commissioned by two crime reduction partnerships in the north-west of England, he shows how the construct of the ‘gang’ is being used as a signifier for black youth (the new folk devils) so as to justify their differential treatment by the state. But when it comes to young white men with a history of violent extremism, the state works in the opposite direction.

In ‘Rewiring fascists: behind the cult of Exit’, Liz Fekete argues that far-right extremists are treated as ‘lost sheep’ to be brought back into the national fold through cognitive treatment focusing on social and psychological problems – a process which can be manipulated so as to avoid punishment. With notions of crime and appropriate punishment turned on their head, academics and other practitioners find new opportunities, in terms of funding and influence, opening up in the ‘gang’ and ‘counter-radicalisation’ industries.

Victoria Brittain examines in ‘Ken Saro-Wiwa: a hero for our times’ the enduring legacy of Saro-Wiwa’s supposed heinous crime – to speak out against ecological destruction. Twenty years ago, when the Ogoni people, led by Saro-Wiwa, stood up against the depredations of Shell in their homeland, the Nigerian military dictatorship delivered the ultimate punishment – the death penalty.

At the other end of the punitive spectrum, Peter Pelz, a co-director of Soul of Europe, a mediation project, returns to Bosnia where some of the most terrible war crimes of the last twenty years were perpetrated and considers how people’s plenums are beginning the task of building a community-based justice. And between these two points on the scale, Christopher Magno and Philip Parnell’s piece, ‘The imperialism of race: class, rights and patronage’, dissects the lineage of the punishment – a second-class citizenship – meted out to half of Manila’s population. Its crime? Being poor.

I was ordered to appear in Court to explain my circumstances.
In Court I identified myself as a Black, Male, IC3, B9, BEUR, according to the official Race and Ethnicity classification codes as used by the Police and Civil Services.
I told the Court that I was a victim of Racism.
I refused to proceed with the Court case until the Judge had identified herself as I had done.
The Judge said that she was a “White Woman” and that she was not a Racist.
I asked the Judge how it was possible to classify herself as “White” and not be a Racist.
The Judge said that I needed to see the Mental Health Services.