Could Jimmy Mubenga’s death have been prevented? 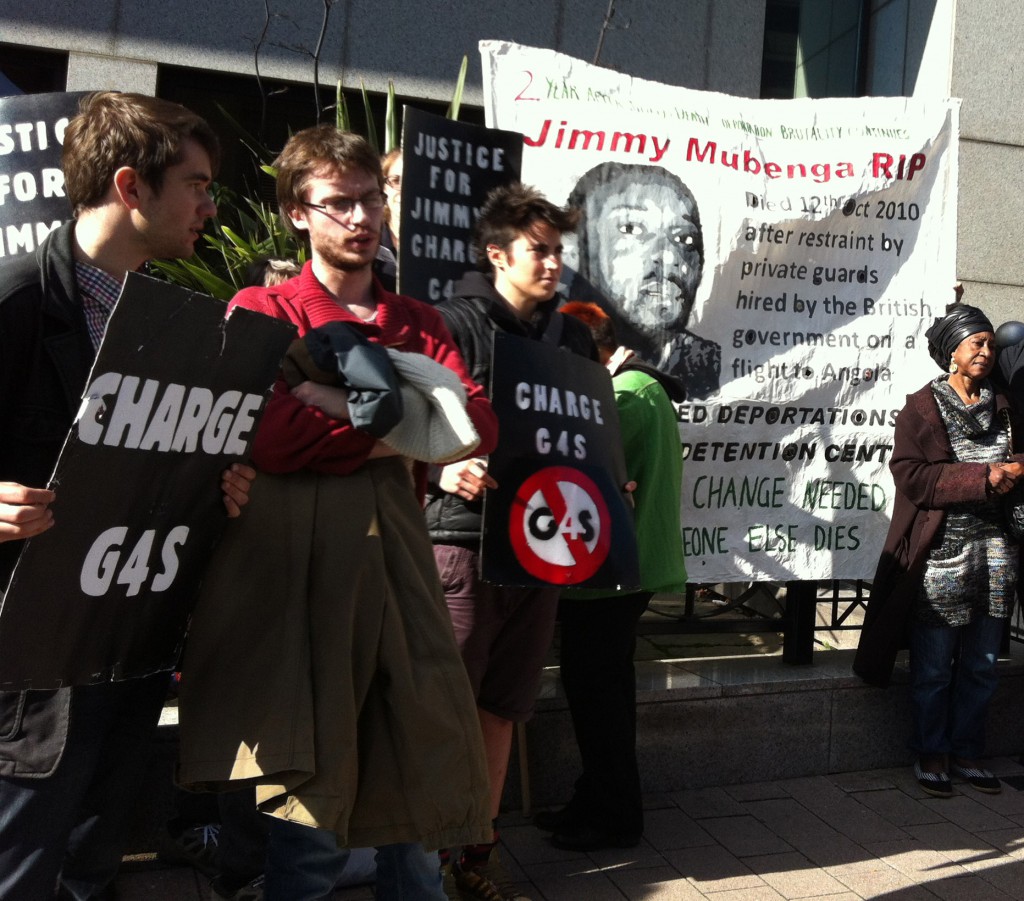 As we await the publication of a new Home Office manual on deportations, IRR News has gleaned evidence from a number of Freedom of Information requests suggesting that the death of Jimmy Mubenga during deportation could have been prevented.

Jimmy Mubenga died on 12 October 2010. A number of Freedom of Information requests into the government’s use of force during deportations have revealed that recommendations made two years earlier in a 2008 report, commissioned by the UK Border Agency and entitled Project Status Report: 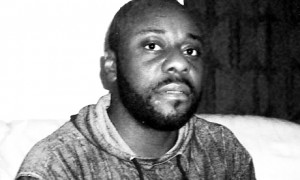 UKBA Restraint on Aeroplanes, were never implemented. The recommendations highlighted specific dangers associated with particular restraint techniques on aircraft. The report states: ‘Following on from the Medical advice received from experts in restraint related deaths in custody, HMPS [HM Prison Service] have strictly followed the advice that restraints in a seated position offer an increased risk of restraint related medical difficulties and that the use of the head support position increases the risk. We advise that all seated restraints remove the use of head support from the front (recommendation 9).’

In the ‘head support position’, a person’s head is pushed into their lap. This was precisely the method of restraint used on Jimmy Mubenga, who died on the floor of a British Airways plane at Heathrow, after being restrained by three guards from the private security company G4S as he was being deported to Angola

Project Status Report: UKBA Restraint on Aeroplanes by the National Tactical Response Group (NTRG), was apparently never made public. It reviewed ‘the operational use of restraint prior to, and during the removal of detainees from the UK to their destination country’. Based on observations of two Prison Service staff on a June 2008 charter flight from London Stansted to Kosovo Albania with thirty people on board,[1] it recommended more realistic training scenarios and the development of a system ‘for use of mechanical restraints’ including ‘handcuffs, leg restraints, spit hoods and body restraints’. How the Home Office followed up the recommendations contained in this report is unknown. The report seems to have died its own death.

Following the death of Jimmy Mubenga the UKBA initiated another review. According to its April 2012 response to a critical Home Affairs Committee report on ‘Rules governing enforced removals from the UK’, the Home Office said that, ‘In 2011 the UK Border Agency formally requested that NOMS’ National Tactical Response Group conduct a review of the current restraint techniques being used by escorts including those used during overseas removals given the unique environment. NOMS advised in the first instance that the techniques used by escorts are not unsafe. However, any use of restraint carries an element of risk and NOMS are currently examining the techniques to see if they can be adapted to make them even safer. Officials will carefully consider any recommendations arising from that review.’[2] 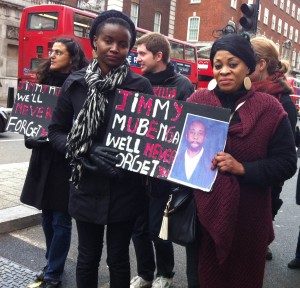 In July 2013, an inquest jury ruled that Jimmy Mubenga was unlawfully killed by three G4S guards ‘using unreasonable force and acting in an unlawful manner’ when they restrained him for between 30-40 minutes. They found that he ‘was pushed or held down by one or more of the guards causing his breathing to be impeded … [He] was pushed or held down, or a combination of the two, [which] was a significant … more than a minimal cause of death … The guards we believe would have known that they would have caused Mr Mubenga harm in their actions if not serious harm.’[4]

Seven months after the damning inquest jury verdict, the family of Jimmy Mubenga is still waiting for the CPS to make a decision on whether it will charge the three G4S officers.[5]

Following the inquest the coroner, Karon Monaghan QC, made a Rule 43 report (in order to prevent such deaths in the future),[6] in which she was critical of government failure to act on previous advice: ‘the outcome of the work being undertaken is still not known and no changes of any significance have yet been introduced (nearly three years after Mr Mubenga’s death). It means that the concerns that arose from the evidence in this Inquest in relation to these matters have not been dispelled by any identifiable changes.’ She called for a ‘review [of] the approved methods of restraint, and specifically the use of force in overseas removals’. ‘Appropriate techniques and bespoke training packages, reflecting the environment in which restraint may need to be applied (aircraft), should be introduced expeditiously’ she added.

The 2011 review resulted in the establishment, in 2013, of the Independent Advisory Panel on Non-Compliance Management which is chaired by Stephen Shaw (a former Prisons and Probation Ombudsman for England and Wales) and includes five others including three doctors. It has been tasked with producing ‘a bespoke training package for use by detainee custody officers who escort adults being removed from the UK’. The new Home Office Manual on Escorting Safely (HOMES), due to be completed by the end of March, is to include a DVD containing medical advice, sections on pain compliance and handcuffs, new use of force forms and the types of restraint methods allowed including new equipment such as the ‘aircraft aisle chair’ which will see people strapped into a wheelchair-type contraption to be taken on board a plane and ‘waist restraint belts’.[7] A demonstration of ‘complete scenarios from de-escalation through to full restraint’ was scheduled for early February at the Virgin Atlantic base at Gatwick airport. The completed training package will then have to be implemented which will take some time. However the Panel has already expressed concerns about completion in time.

How many more Jimmy Mubengas will there be in a system geared to meeting politically-determined deportation targets, which inevitably means reluctant deportees are trussed up like parcels to be returned from whence they came?

Read an IRR News story: Jimmy Mubenga: a day in the life of an inquest

Read an IRR News story: Two years on and no justice for Jimmy Mubenga

[1] Incidentally, the two authors of the report had wanted to follow a deportation ‘in full’ from detention centre to country of removal. However, according to the report, ‘this was not possible due to the filming of a soon-to-be aired Sky television documentary about the work of the UKBA staff’. (This was a programme to which the Home Office contributed nearly half a million pounds, later repaid by Sky. Read an IRR News story: PR and the selling of border controls.) [2] The Government Response to the Eighteenth Report from the Home Affairs Committee Session 2010–12 HC 563, Rules governing enforced removals from the UK, download it here (pdf file, 221kb). [3] Report By The Assistant Deputy Coroner, Karon Monaghan QC, Under The Coroner’s Rules 1984, Rule 43, Inquest Into The Death Of Jimmy Kelenda Mubenga, download it here (pdf file, 631kb). [4] Inquisition into the death of Jimmy Mubenga, download it here (pdf file, 108kb). [5] After the inquest, the case was sent back to the Crown Prosecution Service (CPS) to consider whether there was enough evidence to prosecute the three G4S officers. The CPS had already ruled out charges against the guards in July 2012, finding that there was insufficient evidence – a decision that was widely criticised as perverse by Sir David Ramsbotham and others. And the CPS has recently been criticised for the length of time it takes to make decisions following deaths in custody, read IRR News stories: Call for end to CPS inaction and Snail’s pace in deaths in custody investigations. [6] Monaghan report,fn 3 above. [7] These types of methods have been in use in Europe for some years and have resulted in a number of deaths, including that of Khaled Abuzarifeh, a 27-year-old Palestinian asylum seeker who died in March 1999 in a lift a Zurich’s Kloten airport after being sedated, gagged, bound hand and foot and then strapped to a wheelchair. For further details read an IRR report: The Deportation Machine: Europe, asylum and human rights.