The Black, Irish, Muslim, Gypsy and Traveller experience of policing was discussed at a two-day symposium.

Earlier this month, campaigning lawyers, scholar activists and community campaigners, from some of the most marginalised communities in England and the North of Ireland, came together at the Bernie Grant Arts Centre in Tottenham to analyse the ‘joined-up state’ and discuss how to form a community of solidarity network between activists from Black, Irish, Muslim Gypsy and Traveller communities.[1] The two-day symposium on ‘Policing Communities: Race, Class and the State’ was organised by the Institute of Race Relations and the Power, Conflict and Justice Research Group at Edge Hill University, in conjunction with the Tottenham Defence Campaign.

The choice of Tottenham as the venue for the two-day symposium was no accident. The demonisation of young people and the vengeance culture that followed the August 2011 ‘riots’ was the immediate impetus for the organising of such an event. Those present from Tottenham included Carol Duggan, the aunt of Mark Duggan, whose fatal shooting by the police led to the demonstration at Tottenham police station, the poor policing of which was to trigger the four days of rioting across England. Carol was joined by veteran community activists, Stafford and Millard Scott who recounted how after the uprisings of 1985 the Broadwater Farm Youth Association faced the same demonisation as young Muslim youth workers face today. (Only in those days, black youth were accused of being radicalised in training camps in Communist Cuba!) And former Guantánamo detainee and director of Cageprisoners, Moazzam Begg, spoke of the deep affinity he felt with the ‘hooded men’ who were tortured by the British Army in the North of Ireland, recounting with evident pride how he was honoured as a guest at the launch of the Museum of Free Derry.

Activists and lawyers from the Belfast-based Relatives for Justice and the United Campaign Against Plastic Bullets, formed in 1984 after the RUC shot dead 22-year-old John Downes, made a heart-rending plea to participants to join their campaign for a complete ban on the use of plastic bullets. In fact, the idea for bringing people from Belfast to Tottenham was born after an intervention by Relatives for Justice founder Clara Reilly who wrote a letter to the Guardian (published on 16 August) pointing out that plastic bullets do not save lives or property but kill and maim and in many cases it was the use of plastic bullets in the north of Ireland that was the cause of civil disturbance. 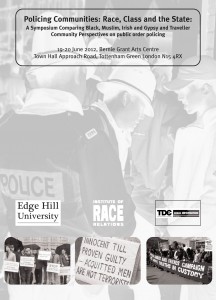 All those present were horrified to hear of the death and injury caused by plastic bullets, particularly on young people whose smaller bodies feel the impact of missiles that travel at 165mph more intensely. One of the key questions being asked over the two days was ‘how do you prevent the militarisation of policing’ , with Clara Reilly pointing out that ‘The promotion of human rights must become a priority. Lethal weaponry runs contrary to this’, adding that it was fundamental to justice that ‘any police service was acceptable to all sections of community.’ From the perspective of those living in the north of Ireland, the killing of Mark Duggan felt like a continuation of the ‘shoot to kill’ policy, the impact of which those present from Belfast, Derry and Portadown knew only too well.

But many other issues were covered over the two-day comparison of experiences – torture and cruel and degrading treatment, deaths in police (and army) custody, the joint enterprise laws, stop and search, the use of the criminal law against the Gypsy and Traveller communities, secret justice, closed material procedures, covert policing methods, and the lack of redress offered by mechanisms like the Independent Police Complaints Commission in England and the Police Ombudsman in the north of Ireland. Participants also touched on more sensitive issues, like the failure of leadership within the BME political establishment and how to stop communities imploding in the face of poverty, exclusion and historic injustices. The question of how to reach vulnerable and exposed youngsters, at the rough end of justice, was always central to the discussion. Jeremy Corbyn MP, who was invited, alongside Lord Herman Ouseley, to attend the final session, said that what was needed was a statute of limitations on offences committed by young people so that they are not ‘permanently condemned’. He recounted how the session in parliament after the August disturbances turned into a competition as to who could be the most punitive and extreme and how he was hissed at when he tried to raise a question about excessive sentencing of young rioters. The MP for Islington North welcomed the fact that the symposium took place at the Bernie Grant Arts Centre, saying that his old-friend ‘Bernie very early on saw the link between the treatment of black youth and the treatment of young people in the north of Ireland and was not afraid to say what was happening to youngsters in Tottenham was the same as what happened to youngsters in Belfast.’

Traditionally, police operations have been tried and tested in the North of Ireland and then brought to England. But one of the surprise conclusions of the symposium is that, post 9/11 and the ‘war on terror’, this is no longer always the case. English counter-radicalisation programmes, such as PREVENT, are now being rolled out in the North of Ireland, while the Justice & Security Bill, drawn up in response to concerns at Westminster, following the Guantánamo detainees successful challenge of the British state, will have major repercussions in the North of Ireland where the use of secret evidence is growing.

‘The police are the state’s frontline, its interface’ commented Stafford Scott, while veteran activist Suresh Grover of The Monitoring Group asked that we develop a new politics of civil rights, that did not just focus on mechanical legal or parliamentary strategies to achieve equal justice and police accountability. It is impossible here to do justice to the discussion held over two days of intense networking, with its immediate sense of fellowship and enhanced appreciation of the importance of practical solidarity. But the IRR and Professor Mark McGovern of the Power, Conflict and Justice Research Group at Edge Hill University will produce a full report of the proceedings next year. The discussion has only just begun.

Read an IRR News story: ‘Plastic bullets cannot further “the cause of peace”’

Thanks for the information. I have been wondering when something was going to be done about the experience of policing, especially after last years riots.