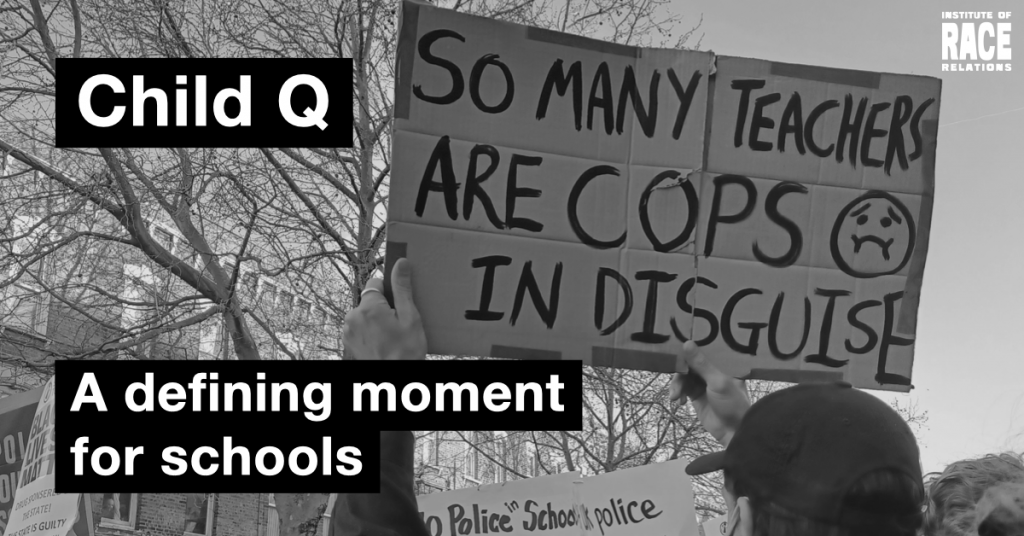 We publish a resource on the case of Child Q including a solidarity statement from Gus John, former director of education in Hackney, author of The Case for a Learner’s Charter for Schools (2010), founder of the Black Parents’ Association Manchester, and current chair of the Communities Empowerment Network (CEN).

No case involving police in schools has galvanised outrage to the same extent as Child Q, the 15-year-old Black Caribbean girl who was strip-searched on the premises of a school academy in Hackney, while she was menstruating. After the incident in December 2020, Hackney Council issued a safeguarding review, just published, which concluded that Child Q was subjected to ‘adultification’ bias – where black and global majority children are held to adult standards — with racism likely to be an ‘influencing factor’ in the strip search. A report by the Independent Office for Police Conduct into police ‘misconduct’ is also imminent, though Mayor of London Sadiq Khan has written to the IOPC suggesting that this is a case of ‘gross misconduct’- the implication being that it would merit dismissal of the officers involved.

On 18 and 20 March, two large protests were held in Hackney, outside Stoke Newington police station and Hackney Town Hall, with action being taken by school children themselves. A solidarity protest was also organised by a coalition of groups, including Kids of Colour, in Manchester. As Child Q issues a statement via her lawyers, Bhatt Murphy, thanking her supporters and signalling her intent to sue the Metropolitan Police and her school (which like Child Q cannot be named to protect her anonymity), more solidarity actions are planned, including in Derby on 26 March. A massive debate is now taking place in Black, educational, police monitoring and anti-racist circles, about the increasing securitisation of schools, and how best to protect the well-being and safety of Black, Brown and working-class students. Below we publish Gus John’s contribution to that debate which focuses on the specific issue of accountability within the academy system. As a further resource for IRR News readers, we include links to the initial Hackney Council Safeguarding review, and to statements issued by Black Learning Achievement and Mental Health (BLAM), No More Exclusions, the Northern Police Monitoring Group and Black women Labour MPs, in London and Liverpool.

The statement was prepared by Gus John for the rally outside Hackney Town Hall and the forthcoming rally in Derby.

I stand in solidarity with Child Q and her family and with all the students at her school.

Could you imagine this barbaric incident happening when I was director of education in Hackney? Not only would we have gathered in similar numbers to demand that Hackney LEA deal with the management and governors of that school, I, as director, would have had the headteacher and the teachers involved arrested and dismissed straight away… and dealt with their trade unions later. But the government has placed these academies and those who run them outside of the control of and accountability to elected representatives.

Parents should never be expected to send their children into such destructive environments. This is state-sanctioned rape of a minor, enabled by a school which clearly abandoned its duty of care to that child. So intent it was on criminalising her, that it was not satisfied that its own search had confirmed what she had told them, i.e., that she did not possess any cannabis. Our target must therefore be not just the police and the school, but the state which empowers both of them to ruin the mental health and the life chances of our children.

We cannot afford to let this be like New Cross 1981, where we saw a massive expression of community outrage and mobilisation, with 25,000 people taking to the streets on an ordinary working Monday to protest the massacre of those 13 young people and the state’s response to it, followed by a failure on our part to hold the feet of the leaders of state and the police and court systems to the fire.

Twelve years after New Cross, the Metropolitan Police let Stephen Lawrence’s murderers escape justice. And having spied on Stephen’s parents as they campaigned for justice for their son, the state turned around and canonised Doreen and made her a baroness of the realm. That was nothing but hypocrisy, cynicism and hubris, all wrapped in a cloak of contempt.

But, back to the present. For decades, schools have been excessively punitive in their dealings with black children of all ages, thus compounding the oppression they face routinely in their daily lives. Those children are used to a heavy and intrusive police presence in their communities outside school. They have a right to expect schools to be different and to care for them.

The United Nations Convention on the Rights of the Child (UNCRC) states that:

(In Child Q’s case, her parents had a right to be informed that the school was calling the police to potentially criminalise their child.)

That school failed Child Q on every one of those provisions of the UNCRC, which were clearly intended to safeguard children.

SOLIDARITY WITH THE STUDENTS ✊ Big up these sixth formers who are demanding the end of the criminalisation in education. We’re also aware of Hackney school students on strike today and we stand with them all 💙 https://t.co/AkssjE6qhX

If schools see themselves as being in business to contain and control, with ‘zero tolerance’ of infractions, however minor, they are simply positioning themselves at the mouth of the school-to-prison pipeline. That is why our urgent demand must be: POLICE OUT OF SCHOOLS!

We know already the attitude the police take towards the black body. Black deaths in custody have given us ample evidence of that in the last half century. Britain had scores of George Floyds long before that cold-blooded murder in Minnesota. The black body, especially poor and working-class, is historically an objectified entity to be controlled, subordinated, subdued and dehumanised, whether through brutality, depravity, coercive compliance, or sheer barbarism.

What is more, as in the case of Child Q, there is an assumption on the part of those in authority, in schools no less than in the police, that no decent citizen would consider excessive any method of controlling and containing black youth and the threat they are presumed to pose to ‘law and order’ and to the success of those businesses called academies.

Let’s face it, Child Q’s school is a business, like every other academy, and it uses the police to control any body and any activity that runs against the interests of the business. So, don’t buy the hype that this is all about raising standards. Child Q’s standards were exceedingly high and she had the highest aspirations for herself, until that school decided to run a bulldozer over them.

But we cannot let them succeed in ruining Child Q and burying her dreams. We demand justice for her and for the hundreds of children across the land whose life chances are ruined by these wretched schools every single week.

NO to Police in Schools!

NO to ‘Zero Tolerance’!

FORWARD to a National Association of Independent Black Students and Parents Organisations!

Read a statement from No More Exclusions