We reproduce here a response that the Daily Express refused to publish after it had carried a series of articles attacking asylum seekers in Britain.

The stream of aggressive stories about asylum seekers appearing in this paper in recent days is of serious concern to all of us who work with and support people fleeing persecution. 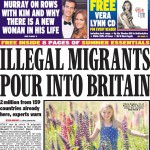 Your readers would be forgiven for thinking the UK is being flooded by asylum seekers. This couldn’t be further from the truth, with asylum applications around the 23,000 mark a year the UK is home to less than 1 per cent of the world’s refugees and takes proportionately below the EU average.

To characterise the people housed in Folkestone as having a ‘lovely break’ by the sea that Brits would be envious of is hugely misleading and dangerous.

Asylum seekers are people who have often fled horrifying experiences in their home countries. Some have been raped. Some have been tortured. Many have witnessed the death of a loved one. Be assured, people who have suffered extreme trauma and whose lives are hanging in the balance will not be focusing on the sea view of temporary room.

There are no refugee visas available for people fleeing persecution. The fact that people are forced to travel clandestinely is recognised within the Refugee Convention and British Law. Entering Britain illegally can be a necessity; it is not an indication of the validity of someone’s asylum claim.

Additionally, appealing a refusal does not indicate someone cheating the system. Decisions on asylum claims can be life or death and the appeal overturn rate shows the Government frequently gets it wrong the first time.

Stirring up hostility against asylum seekers is as unwelcome as it is unsavoury in a country with a proud tradition of protecting refugees.