1 October: Plans for a replacement Dungavel detention centre are revealed, to be sited near Glasgow Airport on an industrial estate, with a 12-foot fence. (The National, 1 October 2016)

1 October: Charities working at Calais criticise plans to close the camp which have had a detrimental effect on the mental health of the many unaccompanied child asylum seekers with an increase in incidents of self-harm and depression. (Observer, 1 October 2016)

2 October: The EU signs a deal to deport an unlimited number of Afghan asylum seekers from Europe; with Afghanistan committed to ‘readmitting any Afghan citizen who has not been granted asylum in Europe, and who refuses to return to Afghanistan voluntarily’. (Guardian, 3 October 2016)

2 October: With 60.07 per cent of the Hungarian electorate either not voting or spoiling their ballot papers, the result of the ‘migration referendum’ challenging the EU’s quota system for refugees is constitutionally null and void. But prime minister Viktor Orbán declares a resounding success and plans to change the constitution anyway. (Hungarian Spectrum, 2 October 2016)

4 October: Concerns about a plan to open a reception centre housing 900 refugees near Basle, Switzerland, contaminated by highly toxic waste, prevented the centre from opening in August. But despite objections about the impact on residents’ health, the centre is scheduled to open in November. (News.de, 4 October 2016)

5 October: The Guardian reveals the plight of Edward Conteh, who is facing deportation to Belgium (where he has no family), after being found guilty of a joint enterprise murder in 2010. (Guardian, 5 October 2016)

8 October: Lawyers for the charity Help Refugees begin legal proceedings against the Home Office, arguing that ministers have failed in obligations to give sanctuary to some of the thousands of unaccompanied children seeking asylum in Europe. (Guardian, 8 October 2016)

9 October: Home secretary Amber Rudd promises to move unaccompanied children in the Calais camps to the UK ‘within days’ of verifying their numbers following widespread criticism of inaction from children’s charities, the Children’s Commissioner, Tory MPs and others. (Guardian, 10 October 2016)

10 October: The Guardian reports on a day of action that is being planned by migrant workers and supporters, to take place on 20 February 2017, the UN Day of Social Justice. It will include a labour boycott, ‘One Day Without Us’, to protest against racism and xenophobia. (Guardian, 10 October 2016)

10 October: Reports of a ‘U-turn’ on plans to force employers to state how many migrant workers they employ are false, the government says, but ‘naming and shaming’ employers was never the intention and the information would not be published. (Guardian, 10 October 2016)

10 October: Court fee increases of over 500 per cent for some types of appeal through the immigration and asylum system come into force, after a public consultation where the measures faced severe opposition. (Right to Remain, 10 October 2016)

12 October: The Ministry of Justice begins an open consultation and is seeking views on proposals for an expedited appeals process for detained immigration and asylum appellants. View details here, the consultation closes on 22 November 2016.

13 October: Harmondsworth detention centre, the largest of its kind in Europe, receives a zero out of five food hygiene rating. (This Local London, 13 October 2016)

1 October: A whites-only food bank established in Glasgow has been condemned by politicians as unacceptable after the group offered free food and clothes to white homeless people. (Evening Times, 1 October 2016)

1 October: The EDL marches through Boston calling on Theresa May to leave the EU. (Lincolnshire Reporter, 1 October 2016)

6 October: Daniel Carlsen, leader of the far-right Danes’ Party, is charged under an anti-racism law after distributing over 100 aerosols labelled ‘Asyl-Spray’ to ‘protect’ people from asylum seekers in Haderslev, southern Jutland, where a Red Cross centre houses around 140 asylum seekers. (The Local, 6 October 2016)

26 September: It is revealed that a formal complaint has been lodged with police in Milton Keynes over their alleged failures in the case of a racially motivated attack on a pregnant woman who lost her baby after it took them five weeks to release CCTV footage of the attack. (Milton Keynes Citizen, 27 September 2016)

29 September: Three schoolgirls, aged 15 and under, plead guilty to racially aggravated assault and criminal damage after racially abusing and launching a ‘relentless assault’ on three workers at a pizza shop in Walton, Liverpool. They are sentenced to a three-month curfew, restraining orders and are ordered to pay compensation. (Liverpool Echo, 29 September 2016)

30 September: Joachim Kebschull, the refugee-supporting mayor of Oersdorf in northern Germany, is beaten unconscious on the way to a town meeting after receiving threatening messages for months. (Deutsche Welle, 30 September 2016)

1 October: A video is posted on Facebook showing three schoolchildren in school uniform racially abusing and throwing a stone at a Romanian woman in an Antrim street. (Belfast Telegraph, 3 October 2016)

4 October: The European Commission Against Racism and Intolerance (ECRI) condemns rising racist violence amid an ‘intolerant political discourse’ contributing to xenophobia, in its Report on the United Kingdom, download it here.

5 October: In Glasgow, Ronnie Coulter is convicted of the November 1998 murder of Surjit Singh Chhokar, whose family believe he was killed because of his race. (STV, 5 October 2016)

6 October: Essex police decide to take no further action against five teenagers arrested following the murder of Arkadiusz Jóźwik in Harlow in August. Another 15-year-old remains on bail in connection with the murder. (Guardian, 6 October 2016)

30 September: The Independent Police Complaints Commission (IPCC) announces that a police officer is to face a disciplinary tribunal after he was filmed repeatedly striking a man with a baton at St Pancras station earlier this year. The Crown Prosecution Service (CPS) has ruled out criminal charges. (Ham & High, 30 September 2016)

2 October: The Observer reports on the burial in Jamaica of Mzee Mohammed, who died after an altercation with Liverpool police in July, and of his family’s concerns following his brutal death. (Observer, 2 October 2016)

4 October: A high court judge rules that the commander of the police operation leading to the fatal shooting of Jermaine Baker in Wood Green in December 2015, known only as FE16, can retire from the police despite still being under investigation. (This is Local London, 6 October 2016)

8 October: Three police officers accused of racially discriminating against a black firefighter make official complaints alleging criminal conduct by the IPCC over its handling of the case. (Guardian, 8 October 2016)

12 October: At Sheffield Crown Court, the trial of ten Asian men opens who claim they were acting in self-defence or defending others, after they were attacked following a right-wing demonstration and anti-fascist counter protest in Rotherham on 5 September last year. (Asian Image, 12 October 2016)

12 October: The CPS charges three police officers with perjury and perverting the course of justice following the 2011 death of Kingsley Burrell in Birmingham, after he was detained and taken to a mental health unit. (Birmingham Mail, 12 October 2016)

3 October: The BBC is accused of stirring up racial tension after a BBC producer posted a message on the EDL’s Facebook page asking for audience members for an edition of Question Time in Lincoln. (Lincolnshire Echo, 2 October 2016)

12 October: Sir Alan Moses, who chairs the Independent Press Standards Organisation, says he is frustrated with the ‘nasty’ tone of some newspapers when covering race and immigration, but says it is not the role of Ipso to intervene on matters of tone or taste. (Financial Times, 12 October 2016)

10 October: Black communities in London are disproportionately more likely to breathe illegal levels of air pollution than white and Asian ones because of where they live, according to a study for the mayor of London. (Guardian, 10 October 2016)

30 September: Bulgarian MPs overwhelmingly approve a bill banning the public wearing of the burqa, proposed by the ruling coalition Patriotic Front, after MPs from the ethnic-Turkish Movement for Rights and Freedoms leave the parliamentary chamber, calling the measure Islamophobic and anti-democratic. (Balkan Insight, 30 September 2016)

1 October: G4S takes over the anti-discrimination Equality Advisory Support Service helpline, the day after a high court judge refuses permission for a judicial review of the government’s decision to award G4S the contract on the basis that further inquiries into the equalities impact of the decision would not have made a difference to the decision. (Solicitors’ Journal, Law Centres Network, 30 September 2016)

3 October: The Greek education minister announces that refugee children will be segregated in Greek state primary schools, starting classes at the end of the normal school day at 2pm, following opposition to the children’s attendance from parents’ associations. (Naftemporiki.gr, 3 October 2016) 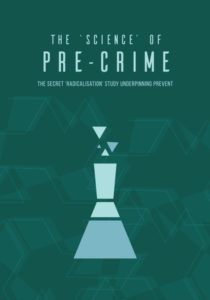 All of us have a duty to combat racism. Racism divides and weakens our resistance to injustice and corporate exploitation.