30 January: Anthony Long, the ex-police officer accused of the murder of Azelle Rodney during a police operation in April 2005, appears in court and pleads not guilty. (BBC News, 30 January 2015)

30 January: HM Inspector of Constabulary publishes a report: Integrity matters: An inspection of arrangements to ensure integrity and to provide the capability to tackle corruption in policing. Download the report here.

30 January: The Police Federation calls for all uniformed police officers to be provided with Tasers to provide protection from terrorists. (Guardian, 30 January 2015) 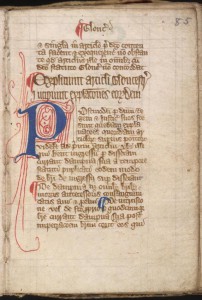 1 February: Campaigners from the Justice Alliance call for a three-day event celebrating the Magna Carta to be boycotted because the government has ‘decimated legal aid’. (Guardian, 1 February 2015)

2 February: The inquest into the death of Habib ‘Paps’ Ullah begins in Beaconsfield, eight years after his death following a stop and search by police in High Wycombe. (Slough Observer, 2 February 2015)

2 February: The inquest into the death of 18-year-old Shanice Paris Goff hears that police officers acted aggressively when they arrived at her boyfriend’s Woolwich flat. They had been seeking Goff who had been on the run for eight months after she was released on licence and the licence was revoked. (News Shopper, 2 February 2015)

4 February: An inquest jury at Worcestershire Coroners’ Court concludes that failings at HMP Hewell contributed to the death of Paul Malicus Coley, a 44-year-old father of five, in December 2013. (Garden Court Chambers, 4 February 2015)

6 February: A report by the Victims’ Commissioner, which comments on how victims of crime should not be ignored, omits any reference to the experiences of those whose family members have died in custody. (Huffington Post, 6 February 2015)

9 February: An MPs’ report that examines antisemitism in Britain recommends that social media users who persistently spread racial hatred online should be given ‘internet asbos’ blocking them from sites such as Facebook and Twitter. (Guardian, 9 February 2015)

9 February: It is revealed that Home Secretary Theresa May is to order an inquiry into the collapse of the country’s biggest ever police corruption trial which fell apart at an estimated cost of £30m in 2011. (Channel 4 News, 9 February 2015)

12 February: Four police officers appear at Bristol crown court charged with misconduct and accused of wilful neglect in public office following the murder of Bijan Ebrahmi who had requested police help hours before his death in July 2013. (Bristol Post, 12 February 2015) 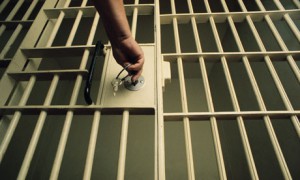 23 January: The Court of Appeal rules that foreign nationals who pose a threat to national security cannot be deported to Algeria because of potential breaches to their human rights, particularly if they were to be held in ‘garde a vue’ detention. (UK Human Rights Blog, 2 February 2015)

29 January: The Migrants’ Rights Network and the University of Manchester Centre on Dynamics of Ethnicity publish a joint report: Migrant Voters in the 2015 General Election. Download the report here (pdf file, 2.4mb).

30 January: The Court of Appeal upholds the deportation of end-stage kidney disease patients reliant on dialysis to stay alive, in the knowledge that they face death within weeks of deportation. (BAILII, 30 January 2015)

31 January: Firefighters are called to Brook House immigration removal centre after one of the rooms is set on fire. One person is treated for smoke inhalation. (Crawley News, 1 February 2015) 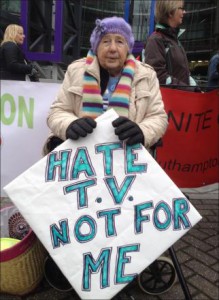 1 February: Activists make use of a Daily Mail offer with P&O ferries to travel to Calais for £1 to support asylum seekers. (Guardian, 3 February 2015)

2 February: Channel 4 is forced to cut short Immigration Street after angry protests by residents. More than 1,000 people signed a petition against the programme, arguing that it could ignite ‘racially-motivated violence’. (Independent, 2 February 2015)

3 February: A HM Inspector of Prisons report into Campsfield House Removal Centre in Oxfordshire finds that three children have been detained at the centre in 2012 and 2013 despite a commitment to end the practice, with one child being detained for 62 days ‘by mistake’. (Corporate Watch, 3 February 2015)

3 February: Ferguson campaigners from the US join campaigners at the London offices of G4S in protest over the death of Jimmy Mubenga. (Guardian, 3 February 2015)

6 February: Visas are granted to the Zimbabwean relatives of Andrea Gada, a five-year-old girl who died after a car accident, who had been barred from entering the UK for her funeral. (BBC News, 6 February 2015) 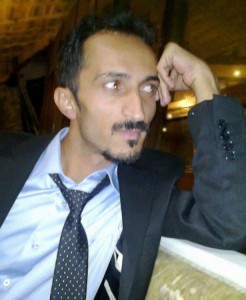 6 February: A coroner records a verdict of accidental death regarding 32-year-old Hikmet Komur, a Turkish man who in July 2013 was found frozen to death in the undercarriage of an aircraft at Heathrow which had recently arrived from Istanbul. (Mirror, 6 February 2015)

8 February: Home secretary Theresa May announces an independent review of the welfare of migrants held in detention centres or set for escort, including prior to deportation. (Guardian, 8 February 2015)

10 February: It is announced that ex-MI5 officer David Bolt is to be the next Independent Chief Inspector of Borders and Immigration. (Guardian, 10 February 2015)

11 February: The EU is criticised for not committing to rescue operations such as the Italian Mare Nostrum after nearly 300 migrants have died or gone missing off the coast of Lampedusa. (Amnesty International, 11 February 2015)

9 February: A report is published by The Tavistock Institute of Human Relations criticising how mental health issues are dealt with in immigration removal centres. (Guardian, 9 February 2015)

1 February: The Guardian reveals that Vince Cable, the business secretary, has been engaged in an ongoing battle with the Office for National Statistics over its references to a target to cut annual net migration, which is not government policy but a Conservative party goal. (Guardian, 1 February 2015)

29 January: Five of Pegida’s twelve committee members, led by management consultant Kathrin Oertel, resign to form the splinter movement for Direct Democracy in Europe (Direkte Demokratie für Europa). The split in Pegida comes shortly after the publication of a photograph of its leader Lutz Bachmann, posing with a Hitler hairstyle and a toothbrush moustache. (Independent, 29 January 2015)

2 February: Self-described ‘nationalist, fascist, theorist and supporter of white rights’, Joshua Bonehill, announces a demonstration through Stamford Hill, London in protest at the ‘Jewification’ of the area. (Guardian, 2 February 2015)

5 February: A crowd of some 300 demonstrators delay by more than an hour a controversial speech by Marine Le Pen, the leader of France’s Front National, to the Oxford Union. (Guardian, 5 February 2015)

5 February: The Court of Appeal upholds the home secretary’s exclusion of Pamela Geller and Robert Spencer, founders of Stop Islamization of America, who were prevented from travelling to the UK to address an EDL rally after Lee Rigby’s murder. (BAILII, 5 February 2015)

5 February: German far-right group Pegida, who are against the perceived ‘Islamisation of the west’, announces plans to march in Newcastle in its first UK rally. (Guardian, 5 February 2015) 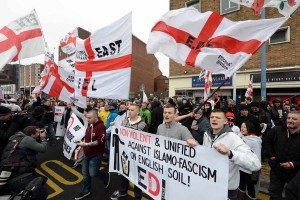 7 February: Twenty-nine people are arrested as 600 EDL supporters demonstrate in Dudley to protest plans for the construction of a new mosque. (Express & Star, 7 February 2015)

8 February: The FN’s Sophie Montel narrowly loses to the Socialist party candidate in the second round of a legislative by-election in the Doubs department of eastern France. Montel won 32.6 per cent of the vote in the first round the previous week. (Financial Times, 9 February 2015)

9 February: Joshua Bonehill (see above) is found guilty of six counts of malicious communications and given a three-month suspended sentence after propagating false allegations about people, including labelling some of them as ‘paedophiles’. (Western Gazette, 9 February 2015)

4 February: Dominic Bennett, 18, is sentenced to 45 months’ youth detention for a racist attack in Wrexham, during which he assaulted a Nigerian man with a broken bottle. By the time he was arrested shortly after the attack, Bennett was found with a swastika and the letters ‘SS’ freshly scratched into his own skin. (Wales Online, 4 February 2015)

5 February: The Community Security Trust announces that it has recorded 1,168 antisemitic incidents in 2014, 25 per cent more than in 2013 and the highest number it has ever recorded. (Guardian, 5 February 2015) 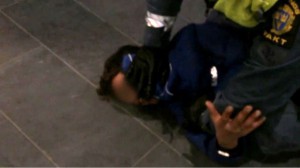 10 February: Hundreds of people protest in Malmö and Stockholm following the release of a video showing a security guard violently restraining a nine-year-old Muslim boy in a train station in Malmö. The boy and his twelve-year-old friend, both asylum seekers awaiting the results of their applications, have now been reported missing. (Sveriges Radio, 11 February 2015)

3 February: Guidance on school exclusions is withdrawn, after being introduced without consultation or warning, following legal action by children’s groups who were concerned that more children would face expulsion.  (Guardian, 3 February 2015)

5 February: The Department of Health announces a pilot scheme, starting later this year, to conduct nationality checks on those registering at GP practices. (Pulse, 5 February 2015)