13 January: Refugees including children are walking through Russia to Finland in temperatures of minus 30 degrees, according to reports. (Independent Barents Observer, 13 January 2016)

14 January: The Solicitors Regulation Authority announces a review of legal support for asylum seekers after new research finds that some solicitors do not fully understand relevant laws and some relied on interpreters who spoke the wrong language. Download the research here. (Law Gazette, 15 January 2016)

15 January: Rob Lawrie, 49, is spared jail in France after attempting to smuggle a 4-year-old Afghan girl to family members in the UK from Calais. He is fined £755 (which is to be waived if he commits no further offences in five years). (Independent, 15 January 2016)

15 January: The Home Office drops plans to cut the wages paid to more than 2,000 interpreters following threats of a mass boycott. (Guardian, 15 January 2016)

16 January: Protestors hold a ‘die-in’ at St Pancras’ Eurostar terminal in protest at the impending clearance of large sections of the ‘Jungle’ camp at Calais. (Guardian, 16 January 2016)

18 January: Bulldozers move into the ‘Jungle’ at Calais to clear the area for security reasons, after most migrants are relocated to refitted shipping containers. (BBC News, 18 January 2016)

18 January: Police in Central Heesch, Netherlands, break up a 1,000-strong anti-refugee protest as protesters attempt to storm a public consultation at the town hall on building an accommodation centre for asylum seekers. Hours earlier, Geert Wilders posted a comment on Facebook demanding that all male refugees from Islamic countries be locked up in order to protect Dutch women from Cologne-style assaults. (Dutch News, 19 January 2016)

20 January: Home Office officials announce a visit to Middlesbrough following allegations that asylum seekers are housed in homes with red doors, which has made them identifiable and subject to racist attack. The homes have been provided by G4S through its subcontractor Jomast. (Guardian, 20 January 2016)

20 January: The UK immigration tribunal orders three children and an adult in Calais to be brought to the UK to join their relatives while their asylum claims are considered. (Guardian, 20 January 2016)

20 January: The UK government says it will lobby against EU Commission proposals to scrap the rule that asylum seekers must claim asylum in the first EU country they reach. (Guardian, 20 January 2016)

20 January: Medical Justice appeals a decision by the Home Office at the Information Commissioners Tribunal for its failure to release a report into the death of Mohammed Chowdhury following his release from Harmondsworth removal centre in 2012. (Guardian, 20 January 2016)

21 January: It is announced that prosecutors intend to pursue a prosecution against 40-year-old Sudanese man, Abdul Rahman Haroun, for causing obstruction to an engine or carriage after he walked through the Channel Tunnel to the UK last year. (BBC News, 21 January 2016)

22 January: Two Iranian men appear in court and plead not guilty to charges of obstructing the railway after walking through the Channel Tunnel. The trial is due to be held on 4 April. (Folkestone Herald, 22 January 2016)

22 January: A new report finds that Home Office guidance on returning people to Eritrea is largely based on a discredited Danish report which is misleading and biased. (Guardian, 22 January 2016)

23 January: Campaign group Refugees Welcome to the Arctic urges bus drivers, police and others not to participate in deportations from Norway to Russia, which it says breaches refugees’ human rights. (International Barents Observer 23 January 2016)

25 January: Swedish officials call for greater security at overcrowded asylum centres after the fatal stabbing of a 22-year-old employee, Alexandra Mezher, in a refugee centre for unaccompanied youths in Mölndal near Gothenburg by a 15-year-old refugee. (Guardian, 26 January 2016)

24 January: Asylum seekers housed by Clearsprings in Cardiff are made to wear coloured wristbands in order to get fed, it is revealed. (Guardian, 24 January 2016)

26 January: Contractors begin the repainting of red doors of homes of asylum seekers in Middlesbrough and Stockton. (Guardian, 26 January 2016)

26 January: Refused asylum seekers from Eritrea and Sierra Leone are moved from Stansted to various immigration removal centres in preparation for a series of charter flight deportations. (Guardian, 26 January 2016)

26 January: Denmark passes a controversial law to seize asylum seekers’ cash and valuable items if they are in possession of over 10,000 kroner (£1,000) of assets, and to delay family reunification for up to three years. The migration minister, Inge Stojberg, confirms that discussions of whether refugees’ valuables can be sold at public auctions are also taking place. The Chinese artist Ai Weiwei pulls his exhibitions out of two Danish galleries in protest at the new law, labelling it as ‘shameless’. (Independent, 27 January 2016)

27 January: David Cameron is widely criticised after describing the men, women and children who are destitute in Calais as a ‘bunch of migrants’ in an exchange with Jeremy Corbyn at PMQs (Guardian, 27 January 2016)

27 January: A study by the Migration Observatory finds that more than 40 per cent of British workers do not earn enough to marry a non-EU citizen and live together in the UK under government rules. (Wired, 27 January 2016)

19 January: The case is dropped against the police officer involved in the fatal shooting of Hocine Bouras en route from the Colmar prison to the examining magistrate’s office in Strasbourg. The prosecutor found that the officer had acted in legitimate defence. Bouras’ family will appeal the decision. (Le Parisien, 19 January 2016)

19 January: The National DNA Database Ethics Group publishes a report: NDNAD Delivery Unit (NDU): The NDNAD Strategy Board Policy for Access and Use of DNA Samples, Profiles and Associated Data. Download it here.

20 January: The Law Commission launches a consultation on the offence of ‘misconduct in public office’, which is open until 20 March 2016. View details about the consultation here. 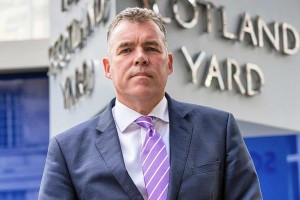 20 January: Commander Richard Walton of the Metropolitan police is allowed to retire without facing disciplinary action, following allegations of misconduct by the Independent Police Complaints Commission during the investigation into the murder of Stephen Lawrence. (BBC News, 20 January 2016)

21 January: The Ministry of Justice publishes: ‘Statistics on the use of language interpreters and translation services in courts and tribunals – quarterly bulletin to 30 September 2015’. Download the statistics here.

22 January: Avon and Somerset police officers, PC Kevin Duffey and PCSO Andrew Passmore, are sacked for misconduct following their failings over the harassment suffered by Bijan Ebrahimi who was murdered. (Guardian, 22 January 2016)

25 January: The Centre for Crime and Justice Studies publishes a report: Dangerous associations: Joint enterprise, gangs and racism – An analysis of the processes of criminalisation of Black, Asian and minority ethnic individuals. Download the report and key findings here.

14 January: The Slovak public prosecutor launches an investigation into prime minister Robert Fico for possible violation of incitement laws after he said that security risks could be minimised if the formation of a compact Muslim community in Slovakia was prevented, linking this to the EU mandatory migrant quota resettlement scheme. (Slovak Spectator, 14 January 2016)

16 January: Two taxi drivers are racially abused and attacked by a 25-strong gang in Oldham, a car window is smashed and the taxi drivers suffer cuts and bruises in the attack. (Manchester Evening News, 18 January 2016)

17 January: Kevin Crehan is charged with racially aggravated harassment after worshippers at a Bristol mosque were racially abused, a flag with the words Bristol United Patriots was left at the mosque and bacon placed on the door handles. (Bristol Post, 19 January 2016)

20 January: An unnamed 28-year-old man is arrested on suspicion of racially aggravated provocation after two pigs’ heads are dumped outside a Muslim girls’ school in Blackburn. (Lancashire Telegraph, 20 January 2016) 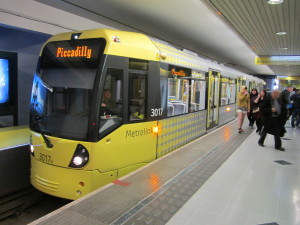 22 January: An unnamed 16-year-old boy appears before Hamilton Sheriff Court and admits making racially offensive comments to three Polish boys and then hitting another 15-year-old Polish boy with a stick, which left him scarred, in an incident at Cambusnethan Priory school, Gowkthrapple, in April 2015. Sentencing is adjourned until 22 February. (Daily Record, 22 January 2016)

22 January: Police release CCTV images of a man wanted in connection with a racially aggravated assault on a 13-year-old boy during a church service in Liverpool Cathedral on 6 December 2015. (Liverpool Echo, 22 January 2016) 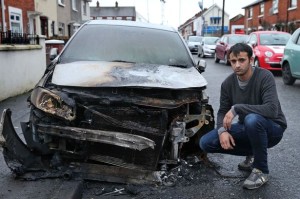 26 January: Police in Northern Ireland announce that they are treating an arson attack in south Belfast, leading to a car being ‘extensively damaged’, as a racially motivated hate crime. (Belfast Live, 26 January 2016)

17 January: Germany’s criminal police chief says more needs to be done to ‘stop the momentum of far-Right crime’ before ‘terrorist structures form’. At the same time, a letter leaked to the press reveals that the justice minister has summonsed his sixteen federal counterparts to discuss how to strengthen the judiciary’s role in protecting people from violence ‘regardless of their skin colour or origin’. (Telegraph, 17 January 2016) 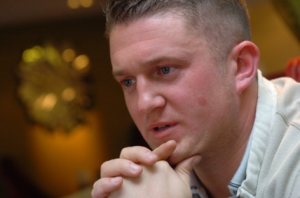 18 January: It is reported that Stephen Yaxley-Lennon, ex-leader of the EDL, is to appear before Peterborough magistrates court on 3 February to face charges of battery following an incident in HMP Peterborough in July 2015. (Luton on Sunday, 18 January 2016)

20 January: Joshua Bonehill-Paine, who was convicted for inciting racial hatred last year, is under investigation by the Prison Service for sending racist letters from two prisons – Manchester and Wandsworth. (Western Daily Press, 20 January 2016)

27 January: Christiane Taubira, the French justice minister, resigns after disagreements with the party over the imminent amendment to the constitution stating that French-born dual-national citizens convicted of terrorist offences can be stripped of their French citizenship. (Guardian, 27 January 2016)

18 January: David Cameron is accused of stigmatising Muslim women after he announces a fund for English classes whilst making reference to them, and also warning warned that migrant spouses who fail language tests may have to leave the UK. (Guardian, 18 January 2016)

21 January: Following Freedom of Information requests the BBC reveals that 400 children aged ten and under, have been referred to the Channel Project which aims to tackle radicalisation of young people; 1,424 young people aged between 11-15 have also been referred. (BBC News, 21 January 2016)

26 January: Ofsted announces that schools inspectors will be able to downgrade schools if they feel the wearing of a face veil ‘is stopping good communications in the classroom’. (Guardian, 26 January 2016)

19 January: An MP introduces an amendment to the Freedom of Information Act which would make ‘any private companies, social enterprises and charities contracted to carry out work for public authorities’ to be subject to FoI laws. (Civil Society, 20 January 2016)

21 January: A coalition of Scottish groups calls on Holyrood to halt the Immigration Bill as it circumvents Scottish devolved powers in the key areas of housing and child protection. (Guardian, 21 January 2016)

21 January: Benefits Street producers, Love Productions, reveal that their next TV series will be called Keeping Up with the Khans and will centre on refugees, Roma migrants and Pakistani communities in Sheffield. (Guardian, 21 January 2016)

17 January: Berlin police call for more responsibility amongst social media users after a storm of speculation erupted when a 13-year-old German-Russian teenager claimed she was kidnapped and raped by three foreign men after going missing from school. Although the claims had no substance, the far-right National Democratic Party of Germany and sections of the Russian media are now claiming a police cover-up. (Tribune, 17 January 2016)

Keeping up to date