12 October: The FN-backed mayor of the southern French town of Béziers launches a referendum on whether the town should accept 40 people from the Calais camp and plasters the town with posters saying ‘The state is imposing them on us’. (Independent, 12 October 2016)

13 October: A Syrian man has his conviction for using a false passport to get the UK quashed after spending six months in prison. (Guardian, 13 October 2016)

14 October: Volunteers carrying donations for refugees at Calais are denied entry to France on the grounds that they pose a threat to public order. (Guardian, 14 October 2016)

16 October: Greek police use tear gas to disperse residents at the Oreokastro migrant camp, who were protesting at the police response to a hit-and-run that killed a Kurdish woman and her 10-year-old son. (The Greek Reporter, 16 October 2016)

18 October: Three Serco guards who worked at Yarl’s Wood detention centre appear at Luton crown court charged with various sexual offences including rape, carried out against a 22-year-old woman who was facing deportation in 2012. The trial is later halted after a juror is taken ill. (Bedford Today, 18 October 2016, 25 October 2016)

19 October: UK dentists condemn calls for unaccompanied asylum seeking children arriving from Calais to have their teeth examined in order to verify their age, saying such tests would be inaccurate as well as unethical. (Independent, 19 October 2016)

19 October: Only six of nine regional authorities have signed up to a voluntary scheme to receive unaccompanied asylum seeking children, meaning that at least 38 and up to 76 of 152 councils in England are not taking any of the children. (Children & Young People Now, 19 October 2016)

19 October: As refugee children arrive from the Calais camps, Citizens UK, which has been assisting children in Calais, threatens to take the UK government to court unless it intervenes in the cases of thirty unaccompanied children stuck there. (Guardian, 19 October 2016)

21 October: After a public campaign, the Home Office reverses its refusal of a visa to the sister of a Nigerian leukaemia sufferer to allow her to come to Britain to donate her bone marrow. (BBC News, 21 October 2016)

22 October: The first group of 54 children without family in the UK arrive from the Calais camp, two days before its expected demolition, under the Dubs amendment which committed the government to take up to 3,000 vulnerable children from Europe. (Observer, 23 October 2016)

23 October: It is reported that newly arrived children from Calais have been forced to live in Cedars detention centre (run by G4S) because the Home Office was unprepared. (Observer, 23 October 2016)

24 October: The destruction of the camp at Calais begins, with thousands of people being dispersed to reception centres across France. Charities call for children to be removed from the camp and taken to safety as the demolition begins. (Guardian, 25 October 2016, 26 October 2016)

24 October: New research by IPPR finds that Roma migrants in the UK are feeling deeply insecure following the Brexit vote, with the community facing a ‘triple whammy of challenges’. (Guardian, 24 October 2016)

24 October: A high court judge rules that asylum support of £36.95 per week is enough to provide a dignified standard of living for asylum seekers, dismissing claims that the support rate is inadequate and breaches the EU’s Reception Directive. (British and Irish Legal Information, 24 October 2016)

26 October: Concord, a confederation of European NGOs, finds that EU governments are using foreign aid budgets to meet the costs of refugees at home, with countries such as Denmark, Germany, Austria, Sweden and Italy being the biggest beneficiaries of their own foreign aid budgets. (Guardian, 26 October 2016)

26 October: Devon police say they are ‘keeping an eye’ on a racist Facebook page: Refugees Not Welcome in Devon which has attracted 1,800 followers in a few days. (Exeter Express & Echo, 26 October 2016)

7 October: A 37-year-old man is given a 12-month suspended prison sentence, 150 hours of unpaid work and ordered to pay compensation to a Spanish man whom he attacked with a plank of wood in Bournemouth in May after telling him to speak English. He denies racism. (Bournemouth Echo, 21 October 2016)

11 October: Arsonists set fire to a building in Malmo, Sweden which is home to the Iraqi cultural association Aldoor and a Muslim prayer room. (IINA, 13 October 2016)

12 October: Overseas students no longer feel safe in Poland, says a spokesman for Torun’s Copernicus University after a second Turkish student is attacked in the city. (Associated Press, 12 October 2016)

13 October: A new exhibition opens in Manchester to mark the thirty years since the racist murder of Ahmed Iqbal Ullah at Burnage high school in 1986. (Manchester Evening News, 13 October 2016)

18 October: A 32-year-old man is jailed for 30 months for racially aggravated GBH after an attack on 6 June in Yeovil which left his victim needing reconstructive surgery. (Thisisthewestcountry, 18 October 2016)

20 October: The Met police release pictures of their ten most wanted criminals thought to be hiding in Spain, including Jamie Acourt, one of the suspected murderers of Stephen Lawrence. (Guardian, 20 October 2016)

20 October: A Polish family from Coventry are forced to flee their home after being targeted by racists whose attacks have escalated since the Brexit vote. (Coventry Telegraph, 20 October 2016)

16 October: The Investigatory Powers Tribunal rules that the security services disregarded the law for seventeen years in the bulk collection of confidential data, including personal, biographical, medical, communications and travel information. (Guardian, 17 October 2016) 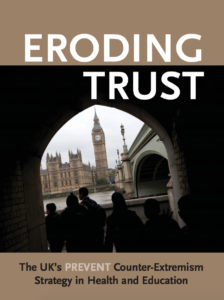 19 October: The Open Society Justice Initiative recommends a rethink on Prevent and says the policy is ‘badly flawed’ in new research on the government scheme. Download Eroding Trust: The UK’s PREVENT Counter-Extremism Strategy in Health and Education here. (Guardian, 19 October 2016)

19 October: The Muslim Council of Britain announces that it will set up its own Prevent programme to counter radicalisation. (Guardian, 19 October 2016)

12 October: German suicide watch procedures are criticised after Syrian terror suspect Jaber al-Bakr, believed to be planning a Paris-style attack, kills himself in police custody in Leipzig, despite being placed under round-the-clock surveillance. (Guardian, 12 October 2016)

14 October: Ministry of Justice figures reveal that Capita, the company currently responsible for providing courtroom interpreting, has only met its performance targets for one three-month period in four years. (Law Gazette, 14 October 2016)

18 October: Following a recommendation by the local police and crime panel, Cambridgeshire’s Police and Crime Commissioner says he will apologise over a seven-year old comment in which he used racist terms for Travellers on Facebook. (Peterborough Today, 18 October 2016)

18 October: PC Emilio Sabatino is dismissed from the Met police after being found guilty of gross misconduct for using a racist term against a security guard at a bar. (Getwestlondon, 18 October 2016)

23 October: A Cambridgeshire police officer faces a disciplinary hearing for gross misconduct after allegedly saying at a service station that black people from London are liars. (Cambridge News, 23 October 2016)

14 October: After the discovery of the skeletal remains of a 9-year-old girl who went missing fifteen years ago in Germany, investigators announce that DNA found at the site matches that of the dead neo-Nazi NSU terrorist Uwe Böhnhardt. (The Local, 14 October 2016)

19 October: In Bavaria, a police officer dies of his injuries shortly after being shot at with three other officers by a member of the far-right Citizens of the Reich movement. (The Local, 19 October 2016)

20 October: The trial of ten Asian men from Rotherham, accused of violent disorder after defending themselves and their town from far-right groups, is told that they were targeted by a ‘motley crew’ calling themselves Yorkshire’s Finest, who had links to the EDL, BNP and NF. (Channel 4 News blog, 20 October 2016)

26 October: Police In Northern Ireland report arresting four men in Ballymena, County Antrim and Coleraine, ‘who appear to have extreme right wing views about tensions in north eastern Europe and have been involved in suspicious activity in a forest in County Antrim’. (BBC News, 26 October 2016)

19 October: Media regulator Ipso rules that the Sun’s Kelvin Mackenzie is not guilty of discrimination or harassment for his comments about newsreader Fatima Manji as she reported from France wearing a hijab. Manji later says the ruling means ‘open season on Muslims’. (Guardian, 19 October 2016, 20 October 2016)

24 October: The Green Party complains to the media regulator, Ipso, after the Sun, Daily Mail, Daily Star and Sunday Telegraph publish pictures of children arriving from Calais in Croydon despite a code of practice which says the pictures of children under 16 should not be used without permission of an adult. (Guardian, 24 October 2016)

25 October: Academics behind a study into the attitudes towards stunning animals prior to slaughter criticise newspaper coverage from the Times and Daily Mail as ‘insulting’ after a headline with the words ‘Muslim ignorance’ was used. (Independent, 25 October 2016)

27 October: A petition is launched to ‘Urge the Children’s Commissioner to investigate the news portrayal of refugee children, view and sign the petition here.

19 October: Five years after Travellers were evicted from the Dale Farm site the BBC speaks to some of those involved. (BBC News, 19 October 2016)

20 October: Labour’s Tracy Brabin wins the Batley and Spen by-election, uncontested except by far-right and fringe parties, following the murder of Jo Cox. Cox’s husband celebrates the fact that the ‘purveyors of hate’ all lost their deposits. (Guardian, 21 October 2016)

18 October: An exhibition, ‘We are the Lions’, is launched to mark forty years since the Grunwick strike, which saw mass protests and solidarity from across the UK for the mainly Asian workers at the photo processing laboratory in Brent, London.