Calendar of racism and resistance (13 – 26 September)

6 September: The Spanish Congress of Deputies reinstalls access to healthcare for undocumented migrants, regardless of status. (ECRE, 14 September 2018)

12 September: Despite the efforts of British Conservative MEPs, the European parliament votes to trigger an article 7 procedure (the EU’s most serious disciplinary procedure) against Hungary, whose leader Victor Orbán claims that Hungary’s MEPs are being targeted for choosing not to be ‘a country of migrants’. (Guardian, 12 September 2018) 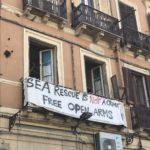 12 September: Aid agencies say that since 26 August and the clampdown on NGO vessels in central the Mediterranean, thousands of migrants and refugees risk dying as a result of no rescue ships operating on the main migration routes between north Africa and southern Europe. (Guardian, 12 September 2018)

13 September: The government announces it will give ‘Calais leave’ to children brought to the UK after the clearance of the Calais camp in October 2016 who did not qualify for refugee status. (Guardian, 13 September 2018)

13 September: Home Office statistics reveal that the average waiting time for an immigration appeal is ten months, and that between April and June 2018 the Home Office lost 52 per cent of them. (Free Movement, 13 September 2018)

13 September: The European Commission announces plans to increase the funding and powers of the European Border and Coast Guard Agency (aka Frontex), which will increase the number of staff from 1,300 to 10,000 by 2020. (Ekathimerini, 13 September 2018)

14 September: The Ile-de-France area of France, which includes Paris, announces the creation of 1,200 accommodation places before the end of September for displaced people to stay whilst their applications are processed. (Info Migrants, 14 September 2018)

15 September: Speaking at a talk, Czech prime minister Andrej Babiz says that the Czech Republic will not take any refugees, without exceptions even in humanitarian cases. (N1, 15 September 2018) 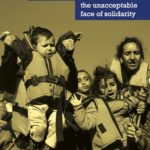 15 September: At a conference on migration between the EU and several African countries, the interior ministers of Austria and Italy, Herbert Kickl and Matteo Salvini, present a plan in which displaced people crossing the Mediterranean would have to remain aboard the ships whilst their asylum claims and refugee status are processed. (Deutsche Welle, 15 September 2018)

16 September: More than 12,000 people in the German cities of Cologne, Dortmund and Gelsenkirchen protest for humane asylum and refugee policies and demand that the government ends deportations to Iraq and Afghanistan. (Deutsche Welle, WDR, 16 September 2018)

17 September: As MSF calls for the emergency evacuation of all refugees at the Moria camp in Lesbos to the Greek mainland, a psychiatric expert  tells of unprecedented suffering due to mental health at the camp, with multiple cases of teenagers attempting suicide each week. (MSF press release, 17 September 2018)

19 September: Pew Research Center publishes survey results that show that the majority of Europeans favour taking in refugees and most disapprove of the way the EU has handled the issue. (FactTank, 19 September 2018)

19 September: The EU Rights Clinic accuses Sweden’s Migration Agency of breaking the law on family reunification, under which permits should be issued within six months, as Sweden’s enforced wait is closer to two years. (The Local, 19 September 2018)

20 September: Two French officials, Madjid Messaoudene (for Saint-Denis) and Thomas Portes (for Tarn-et-Garonne) are being sued by Generation Identity (GI) for comments made during the GI blockade of the Alps in April 2018, that include calling the group ‘Nazis’. (Liberation, 20 September, The Local, 21 April 2018)

21 September: An estimated 400 children, some as young as 10, have been refused citizenship for failing a ‘good character’ test, according to figures obtained through a freedom of information request. (Guardian, 21 September 2018)

24 September: Cabinet ministers agree a post-Brexit visa system based on wealth and skills, in which EU and non-EU workers would be treated the same. (Guardian, 24 September 2018)

24 September: The Soros Foundation sues the Hungarian Government at the European Court of Human Rights over the law that makes it illegal to assist asylum seekers. (Independent, 24 September 2018)

25 September: After Panama revokes the registration license of the Aquarius, the last private rescue ship operating in the Mediterranean, the French government refuses permission for fifty-eight migrants to disembark at Marseilles. (Guardian, 25 September 2018) 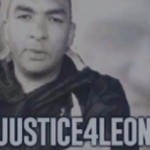 13 September: The Crown Prosecution Service says that a number of Bedfordshire police officers and a member of police staff will not face prosecution for the death of Leon Briggs, who died after being restrained by police in 2013. (The Guardian, 13 September 2018)

14 September: The Independent Office for Police Conduct (IOPC) places ten Greater Manchester police officers under investigation in relation to the death in police custody of Andre Moura, a 30-year-old man originally from Portugal, found unresponsive in a police van after being sprayed with CS gas in July. (BBC News, 14 September 2018)

17 September: An investigation is launched into the death of 30-year-old Mesut Olgun, who died in hospital a week after he was injured whilst in custody at HMP Hewell in Worcestershire in June 2018. (BristolLive, 17 September 2018)

20 September: A Thames Valley police officer receives a written warning at a misconduct meeting after being found guilty of failing to properly observe Leroy Junior Medford, 43, who died in custody last year from an overdose of heroin. (Guardian, 20 September 2018)

21 September: The Independent Office for Police Conduct (IOPC) confirms that a 30-year-old man died in the custody of police after officers were called to a home in Bexeley Heath by those concerned about his welfare. (News Shopper, 21 September 2018) 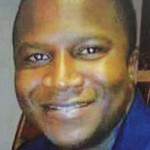 23 September: The family of Sheku Bayoh, who died in police custody in Kircaldy, Scotland in 2015, express disbelief, after the Mail on Sunday suggests that an official investigation due to report next month will recommend that no police officers should face prosecution. (The Courier, 24 September 2018)

14 September: A court in Paris convicts two men described as ‘former skinheads’ for the murder of the 18-year-old anti-fascist activist Clement Méric in June 2013, sentencing Esteban Morillo to eleven years in prison and Samuel Dufour to seven years. (Guardian, 14 September 2018)

15 September: The far-right Football Lads Alliance attend a demonstration organised by Justice for Women and Children in Sunderland, against the local authority’s alleged lack of action against rape and child sexual offences, and are met by hundreds of counter-protesters. (Press TV, 15 September 2018)

18 September: Journalists on the Greek island of Lesbos strike in protest at the harassment and threats they receive from far-right groups as they attempt to report fairly on the plight of refugees and migrants. (The Globe Post, 13 September 2018) 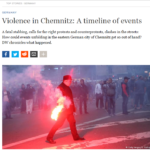 18 September: Hans-Georg Maaßen is removed from his post as head of Germany’s intelligence services, following his attempts to downplay the violence of the far Right at Chemnitz and revelations about meetings with Alternative for Germany. (Guardian, 19 September 2018)

13 September: Fulham Boys School in London has conceded that its strict uniform policy amounts to indirect discrimination and has readmitted 12-year-old Chikayzea Flanders who was told on his first day that his dreadlocked hair had to be cut off or he would face suspension. (Guardian, 13 September 2018)

13 September: A French art college apologises for digitally manipulating a photograph of white students to make them look more diverse, to promote the college in the US. (Guardian, 13 September 2018) 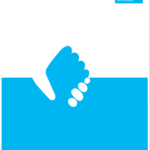 21 September: Unicef research finds that all UK regions are failing in their duty to provide education for unaccompanied asylum-seeking children in their care, with a quarter of secondary and further education students waiting more than three months for a place, and some up to a year. (Guardian, 21 September 2018)

22 September: Glasgow University launches a ‘reparative justice programme’ after a report shows that it benefitted to the tune of £200 million (in today’s money) from the proceeds of slavery. (Guardian, 22 January 2018)

18 September: Denmark’s public service broadcasting’s new contract with the Danish Ministry of Culture states that programming must make clear that Danish society has its ‘roots in Christianity’. (The Local, 18 September 2018)

14 September: A report by BrexitLawNI warns of the risks Brexit poses to human rights and equality protections in Northern Ireland and suggests that dividing British and Irish citizens will increase racial profiling. Read the report here.

21 September: Several Danish mayors say that if a new citizenship bill, denying citizenship to anyone who does not shake the mayor’s hand at a naturalisation ceremony, passes into law they will defy it, as it targets Muslims and violates freedom of religion, a constitutional right. (Guardian, 20 September 2018)

23 September: The Swiss region of St Gallen votes in favour of prohibiting all face-covering garments in public places, a decision that local Islamic organisations have called Islamophobic. (Al jazeera, 23 September 2018) 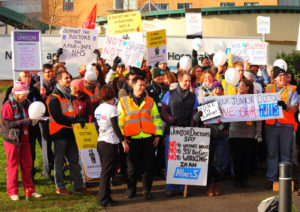 13 September: Campaigners from the North East London Save Our NHS group protest against plans by Barts Health, the biggest NHS trust in London, to introduce identity checks on all patients that are unable to assure staff that they have lived in the UK for the past twelve months. (Evening Standard, 13 September 2018)

13 September: Home Office statistics reveal that white suspects account for 38 per cent of terror-related arrests, followed by those of Asian appearance at 37 per cent. While ‘Islamists’ make up 82 per cent of terrorist prisoners, the next largest category at 13 per cent is of far-right prisoners, with the number increasing from ten to twenty-eight in the last year. (The Independent, 13 September 2018)

20 September: A 19-year-old man is arrested by counter-terrorism police after far-right graffiti and fly-posters were daubed on buildings in Cardiff. (BBC News, 20 September 2018)

22 September: Counter-terrorism police carry out raids on the homes of pro-Khalistani British Sikhs around the UK, seizing cash and electronic devices, as part of a coordinated operation targeting suspects accused of  involvement in ‘extremist activity in India and money laundering’. (Huffington Post, 22 September 2018)

12 September: Jewish and Muslim groups criticise Tory MEPs for voting with Victor Orbán’s government against a vote of censure by the European Parliament, for Hungary’s policies weakening constitutional democracy and violating the human rights of Roma, asylum seekers and refugees. (Guardian, 13 September 2018)

20 September: Italy’s far-right interior minister, Matteo Salvini, sues black MEP Cécile Kyenge for defamation after she calls his League party racist in response to a photograph posted on social media by a League politician that depicted her as an orangutan. (Guardian, 20 September 2018).

19 September: Police appeal for information after two men (who had later to be hospitalised) and a woman were racially abused, punched, kicked and attacked with bottles by a group of up to six men in their late 30s to early 40s, when passing by Turbo Island in Stokes Croft, Bristol. (Bristol Post, 19 September 2018)

18 September: A 22-year-old Asian man is racially abused and attacked by three men, suffering cuts and bruises to his face, whilst walking along College Street in Aberdeen. (Evening Express, 18 September 2018)

18 September: Police appeal for information after a man racially abused, punched and threw furniture at a member of staff in a pub in Northampton. (Northants Telegraph, 18 September 2018)

19 September: Three people are injured by a car, which ploughed into a crowd outside Al-Majlis Al-Hussaini centre in north London ‘in a deliberate attempt to hurt or kill people in Islamic dress’, after volunteers and stewards at the centre were allegedly subjected to racist and Islamophobic abuse. (Guardian, 19 September 2018)

23 September: Paul Sande, a Malawian student at Dorset College, was hospitalised with a fractured skull after being punched in an alleged racist attack on the Luas in Dublin. His sister has started a GoFundMe  page to help pay for her brother’s hospital bills and rent whilst he recovers. (Independent.ie, 23 September 2018)

10 September: A 41-year-old man, is jailed for multiple offences, including racially aggravated assault, for abusing and attacking a security guard and passerby after being caught stealing in a shop in Gloucester. (GloucesterLive, 10 September 2018)

11 September: A 47-year-old woman , is fined and given a community order after admitting to carrying out a racially aggravated assault. (News and Star, 11 September 2018)

17 September: Stephen Bracher, a 56-year-old man with racist and homophobic views, is sentenced to over three years in jail for making bombs and stockpiling weapons, including crossbows and knives in his home in Bishop’s Tawton. (Guardian, 18 September 2018)