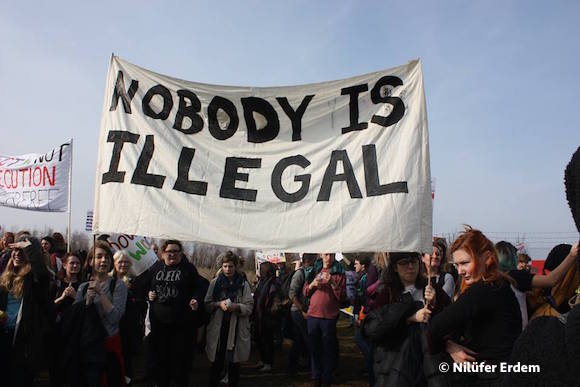 3 March: Home Secretary Theresa May wins the right to deport refused asylum seekers to Afghanistan after the Court of

Appeal overturns an injunction imposed following concerns that the country was too dangerous. (Bureau of Investigative Journalism, 3 March 2016)

11 March: France asks UK border guards to tour the Calais camp to deter refugees as part of a drive by French politicians to achieve total closure of the camp. (Guardian, 11 March 2016)

11 March: Lisbeth Zornig, a former children’s ombudsman, and her husband, accuse the Danish government of ‘criminalising decency’ after being found guilty of transporting people without residence permits under anti-trafficking provisions of the Aliens Act. The couple, who had given a lift to a family of Syrian refugees, are the first of 279 people to be prosecuted under the legislation whose cases have been taken up by ‘With the Human Traffickers‘. (Guardian, 11 March 2016)

12 March: A makeshift banner reading ‘Yarl’s Wood officer in relationship with vulnerable detainees’ is hung out of a window during a protest to shut down the detention centre. A number of allegations of sexual abuse of detained women by male guards have been made in the past. (Independent, 13 March 2016)

15 March: Two haulage firms, one Romanian and one Dutch, begin separate legal cases at the Court of Appeal challenging the legality of fines for carrying stowaways. (Guardian, 15 March 2016)

15 March: The government is defeated when the House of Lords votes 187 to 170 that detention must be limited to 28 days except when a court decides otherwise, during a vote on the Immigration Bill. (BBC News, 15 March 2016)

16 March: Austria’s Constitutional Court finds the country’s new asylum cap, limiting the number of asylum seekers to be admitted this year to 37,500, ‘unlawful and unconstitutional’. (The Local, 16 March 2016)

16 March: Around forty journalists and refugee solidarity activists are arrested and fined in Macedonia after aiding around 1,500 refugees to cross a river bordering Macedonia and Greece. Three refugees from Afghanistan, including a pregnant woman and her teenage sister, died attempting to navigate the crossing themselves hours beforehand. (The Local, 16 March 2016)

18 March: Keith Vaz MP, chair of the Home Affairs Committee, visits Glasgow to investigate reports of poor housing for asylum seekers provided by Serco. Serco admits the day before the visit that allegations that one kitchen was being shared between 40 were ‘substantially correct’. (Herald, 17 March 2016)

18 March: The EU summit with Turkey ends in a deal to return refused refugees to Turkey, which legal commentators and human rights groups condemn as illegal.  (Guardian, 18 March 2016)

18 March: A 26-year-old man from Grathem, in the Netherlands, is charged over claims that he forced women living in an asylum seeker accommodation centre in Gilze into prostitution. (NL Times, 18 March 2016)

21 March: The EU-Turkey deal comes into effect. Refugees in Greece’s Aegean islands are taken to camps on the mainland and the ‘hotspots’ turned into detention centres where new arrivals will be held for return to Turkey after ‘swift interview’ to determine eligibility to stay. UNHCR suspends some activities in Greece.  (Keep Talking Greece, 19 March 2016; UNHCR briefing note, 22 March 2016)

21 March: A secret EU plan is revealed to return 80,000 refused asylum seekers to Afghanistan, using the threat of withdrawal of aid to force the government’s consent, as more of the country falls under Taliban control. (Telegraph, 21 March 2016)

21 March: The House of Lords votes through an amendment to the immigration bill, requiring the government to let 3,000 unaccompanied child refugees into Britain, amid cross-party concerns that child migrants in Calais are living in terrible conditions. (Guardian, 21 March 2016)

22 March: A peaceful protest and blockade in Glasgow, against the pending deportation of an asylum seeker from Namibia, is broken up by around thirty police officers with dogs in a move described by protesters as ‘extremely violent’ and ‘unprecedented’. (Common Space, 22 March 2016)

23 March: The Upper Tribunal’s Immigration and Asylum Chamber halts home secretary Theresa May’s mass deportation of all overseas students who have taken the Test of English for International Communication (TEIOC), because of fraud at just one college. The ruling found that students were deported on the basis of flimsy hearsay evidence. (Politics.co.uk, 23 March 2016)

23 March: An inquiry is announced into the Home Office’s outsourcing of asylum seeker housing to private companies following reports of mistreatment by housing provider Orchard and Shipman in Glasgow. (Scottish Housing News, 23 March 2016)

17 March: Two unnamed teenagers, a 17-year-old boy and 15-year-old girl, are charged with racially aggravated assault in connection with the stabbing of a 17-year-old girl. The victim suffered a knife-wound to her neck in the attack in Seaforth . (Liverpool Echo, 17 March 2016)

17 March: The Amadeu Antonio Foundation and Pro Asyl produce a chronicle of  1,239 assaults on refugees or their housing facilities in Germany in 2015 – a fivefold increase on the previous year. So far in 2016, there have been 289 attacks on refugee housing, including 50 arson attacks, as well as 74 physical assaults. (Deutsche Welle, 17 March 2016)

21 March: A 33-year-old man who stabbed an Asian man in the neck in Sunderland in 2014, telling the police he did it ‘in the name of all the people beheaded by ISIS’ and that he heard voices telling him to attack Muslims, is given a community order with supervision for eighteen months. (Chronicle Live, 21 March 2016)

24 March: An EDL member who racially abused two shopkeepers in Grimsby in 2015 and smashed their shop window is given a six-month suspended sentence. His friend, another EDL supporter who repeatedly punched one of the shopkeepers and shouted ‘I will brick your face and smash your face up’, had already been given a conditional discharge. (Grimsby Telegraph, 24 March 2016) 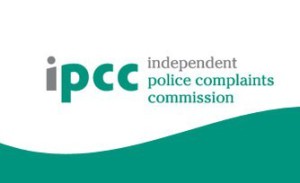 8 March: The Independent Police Complaint Commission (IPCC) launches an investigation into an incident of British Transport police officers allegedly racially discriminating and using excessive force against a black man during an arrest at St Pancras train station. (The Voice, 14 March 2016)

11 March: Police in Croydon are accused of racial profiling after banning a nightclub from playing a form of Jamaican music called bashment. The police argue that the genre of music is linked to crime and disorder. (Croydon Advertiser, 11 March 2016)

12 March: Babar Ahmad calls for an apology from the Metropolitan police commissioner for physical, sexual, religious and verbal abuse in the course of his arrest in December 2003, during which he suffered 73 injuries and for which he subsequently received £60,000 damages. (Guardian, 12 March 2016)

14 March: A report by a French NGO, Christian Action for the Abolition of Torture (ACAT), condemns police violence, in particular the increasing use of firearms. The report focuses on 89 cases of severe injuries as a result of police violence between 2005 and 2015, 26 of which led to fatalities. (Le Monde, 14 March 2016)

15 March: The family of autistic man Faruk Ali, who suffered serious injuries after being arrested by two Luton police officers, condemn plans to hold a gross misconduct hearing for the officers involved over thirty miles from Luton. (Luton News, 15 March 2016)

15 March: Essex police replace all toilets in cells after a man lost three fingertips as he was restrained by police officers while he clung on to a toilet bowl’s metal rim. An IPCC investigation continues into the incident and whether the man’s mental health or nationality influenced the officers’ response. (Saffron Walden Reporter, 15 March 2016) 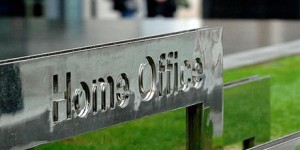 17 March: Home Office figures on arrests under the Terrorism Act reveal that increasing numbers of young people  and women are being arrested on suspicion of terrorism-related offences. View and download the figures here. (Guardian, 17 March 2016)

17 March: Statistics from West Midlands Police show that in 2015, black people were almost three times more likely to be stopped and searched in the West Midlands than white people. (Coventry Telegraph, 17 March 2016)

17 March: It is announced that a public inquiry, rather than an inquest, will be held into the shooting of Anthony Grainger by Greater Manchester Police in Cheshire in 2012, enabling evidence to be heard in the absence of members of his family. (Manchester Evening News, 17 March 2016)

18 March: The Equality and Human Rights Commission publishes a report: Preventing deaths in detention of adults with mental health conditions: progress review. Download the report and other documents here.

21 March: The call for evidence opens for the Lammy Review of BAME over-representation in the Criminal Justice System. Details of how to submit evidence can be found here.

21 March: The Scottish government announces that it will hold public consultations regarding a new code of practice for police powers in order to replace the use of ‘random’ stop-searches. (BBC News, 21 March 2016)

24 March: One of west Yorkshire Police’s most senior murder detectives is placed on restricted duties, having been made the subject of a misconduct investigation by the force’s Professional Standards Department after an allegation that she used racist language. (Yorkshire Evening Post, 24 March 2016)

11 March: A child’s drawing of his father with a knife cutting a cucumber leads to nursery staff raising radicalisation concerns. (BBC News, 11 March 2016)

12 March: In Calais, five far-Right activists, including the founder of an anti-immigration movement, are charged with assaults, theft and impersonating police officers. The men admit intercepting refugees  attempting to board lorries entering the French tunnel, attacking them with iron bars and robbing them of cash and mobile phones. (Independent, 12 March 2016)

14 March: A march to celebrate ‘White Pride Day’ in Swansea, planned for 26 March, will be met with a cultural festival. (South Wales Evening Post, 14 March 2016)

17 March: Three far-right extremists, part of the mobile-messaging group ‘Garage Swastika’, are convicted of an August 2015 petrol bomb attack on a refugee hostel in Salzhemmendorf, Lower Saxony. One of the trio was a volunteer fireman who later helped extinguish the blaze. (Reuters, 17 March 2016)

18 March: Criticism of the long delays in the trial of 69 members of Golden Dawn mounts, after the suspected murderer of anti-fascist rapper Pavlos Fyssas is released from pre-trial detention and placed under house arrest because the maximum time that someone can be held in Greece without a conviction has expired. (AFP, 18 March 2016)

14 March: Peter Herbert, QC, and chair of the Society of Black Lawyers, begins a case alleging race discrimination by the Ministry of Justice after it recommended that he be formally warned for comments he made about racism at a public meeting. (Guardian, 14 March 2016)

22 March: The Runnymede Trust publishes the report Ethnic Inequalities in London, highlighting that ‘ethnic inequalities are persistent and widespread, particularly in employment and housing’. Download the report, here.

14 March: An analysis of newspaper coverage between 2014 and early 2015, by academics at Cardiff University, provides evidence of the extent to which the ‘right-wing press’ has ‘consistently endorsed a hardline anti-refugee and migrant, Fortress Europe approach’. (Conversation, 14 March 2016)

14 March: Civil Exchange publishes a report by Caroline Slocock: Independence in question: The voluntary sector in 2016. Download the report here.

19 March: Thousands attend a march through London, organised by Stand Up To Racism, to mark UN Anti-Racism Day. (The Huffington Post, 19 March 2016)

There are so many racist and hate crimes being reported to the police which remain unresolved due to, “one person’s word against the other.” In view of the fact that racists or perpetrators of racial hate incidents can be sly and sneeky, it is very difficult for victims of hate crime to find justice as apparently the CPS are reluctant to prosecute. How then do victims get justice? Isn’t that why there is an increase in racism as they can get away with it?