Bristol following the fall of Colston 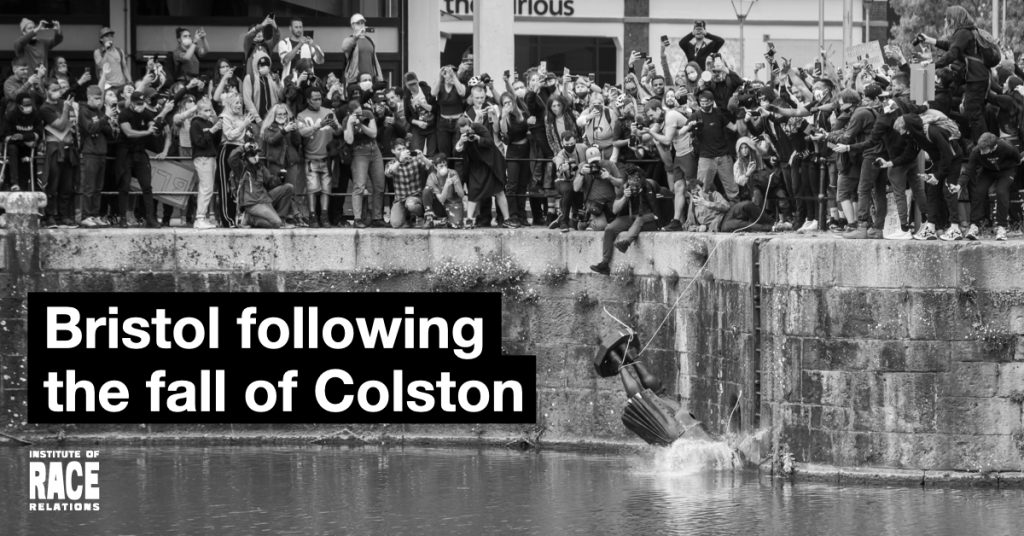 The world watched as the statue of Edward Colston was rolled, pushed and dragged into Bristol Harbour during a Black Lives Matter protest in June 2020. But what have been the further ramifications of the event in Bristol? Rosie Wild reports on recent protests that have taken place in Bristol to support the ‘Colston 4’, who have been charged with criminal damage.

The toppling of the statue of slave-trader Edward Colston during a Black Lives Matter march on 7 June 2020 reverberated around the world. It brought a definitive end to two decades of protests and campaigning to have the statue removed, most recently by groups such as Countering Colston, a network of individuals committed to the decolonisation of Bristol.

Following the event, four people were selected out of a crowd of hundreds and charged with causing criminal damage. Entering a plea of not guilty to the charge of criminal damage during their virtual appearance at Bristol Magistrates Court on 25  January, Rhian Graham (29), Milo Ponsford (25), Jake Skuse (32) and Sage Willoughby (21) asked for their case to be heard by a Crown Court jury. A pre-trial plea hearing will take place there on 2 March, but the full trial is not likely to take place until 2022.

Monday 25 January saw protests against the prosecution of the ‘Colston 4’, both virtual and in real life, hijacked by racists and quashed by the police. After rather heavy-handed advanced warnings against protesting outside the court from Avon and Somerset Police, the Support the Colston Four campaign agreed to move its planned protest online. Nonetheless, four people aged between 43 and 68, were arrested outside Bristol Magistrates Court on 25 January under coronavirus legislation, and four more given formal warnings by the much larger than usual police presence there.

During the very well-attended official online protest, a Zoom teach-in by local academic and campaigner Dr Shawn Sobers was hacked by an unidentified racist who scrawled the N-word across his face. Another virtual protest event, a night of short films and discussion by local black film-makers chaired by former Lord Mayor of Bristol Cleo Lake, was so oversubscribed it was repeated later in the week.

There is considerable support for the Colston 4’s actions in Bristol. Even among those who do not support the nature of how the statue was removed, many accept that it should have been much earlier. The campaign for Bristol institutions to stop honouring the Colston name long predates the statue’s demise, but its fall has certainly catalysed other organisations to follow the lead of music venue the Bristol Beacon (formerly Colston Hall) in finding less offensive names. And yet, this is clearly not the view of the 300 people who staged an ‘All Lives Matter’ protest at the statue’s plinth on 13 June 2020, the person who smashed the listed gravestone of an enslaved African man in a Bristol churchyard, chalking ‘put Colston’s statue back or things will really heat up’, or the person who scrawled the racist word across Dr Sobers’ screen on 25 January.

Given the city’s enduring deep racial divisions and history of uprisings, Bristol City Council’s Mayor Marvin Rees is trying to keep close control of how the narrative about the statue and its fall is presented. Arguing that he must win over all Bristol’s citizens if he wants to make effective change, Rees has set up a hand-picked Bristol History Commission to investigate Bristol’s history ‘in all its fullness’ and report back.

But in the mean time, the welfare of Britain’s statues has been picked up by the Conservative Party as a key issue in its culture wars. Secretary of State for Housing Robert Jenrick published an article in the Daily Telegraph shortly before the Colston 4’s first hearing, vowing to ‘Save Britain’s statues from the woke militants who want to censor our past’. In the case of the statue of Edward Colston, however, it has been those on the Right who have sought to censor his past. After years of DIY plaques and other unauthorised adornments to the statue by protestors, in 2019, Bristol City Council’s compromise solution of adding an official second plaque to the statue contextualising Colston’s life and source of wealth was stymied when the powerful local Society of Merchant Venturers tried to water down the agreed text.

So, once again, nothing was done until on 7 June 2020 the statue itself was watered down, in Bristol harbour. Many locally would argue, and perhaps when they get their day in court the Colston 4 will too, that far from criminal damage this was a long overdue historical reckoning. But whether this will translate into more substantial change for Bristol, a highly segregated city where black people suffer some of the worst deprivation in the country, remains to be seen.

Well of course ‘progressive extremists’ are a threat to the state! Isn’t this why they’ve been singled out for ‘special’ treatment? Perhaps the author thinks we’re living in a democracy and when you think about it, have we ever lived in a real democracy given how long the state has been hammering progressives/trade unionists of all kinds? What’s really important, is how we respond to it and given that ‘progressive extremists’ often operate on the edge of the orthodox left, there’s not a lot of sympathy to be found there, beyond the usual platitudes, which unfortunately tells us more about the state of the left than it does about those ‘progressive extremists’.