A new report by HOPE not Hate, Breitbart – A rightwing plot to shape Europe’s future, explores Breitbart’s influence on global politics, the creation of fake news and its expansion into London.

‘It’s easy to see why the KKK views Trump as their champion when Trump appoints one of the foremost peddlers of white supremacist themes and rhetoric as his top aide.’ This was the response of Senate Democrat Harry Reid when hearing that Steve Bannon, head of Trump’s presidential campaign and former CEO of Breitbart, had been appointed as Trump’s White House chief strategist. A day before this announcement, interim UKIP leader Nigel Farage became the first politician to meet Donald Trump since his election win. What do these two events have in common? They are both the by-product of Breitbart News Service; at least that’s what HOPE not Hate’s report states. 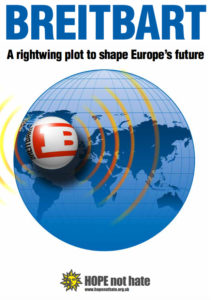 A rightwing plot to shape Europe’s future details comprehensively, and scrutinises the role of, Breitbart in polluting political spaces through the promotion of alt-right ideology and media stories. The report explores the influence of Breitbart News Service on US and UK politics, its role in creating fake news through unsubstantiated claims and the rise of Breitbart London.

Mission, activities and future of Breitbart

HOPE not Hate outlines the mission of Breitbart to reject multiculturalism, feminism, LGBT+ rights and minority rights more generally – a direct challenge to Andrew Breitbart’s vision to provide a voice for ‘freedom-loving people’. Instead, we are told that Breitbart’s aims to undermine liberalism are part of a specific worldview of Judeo-Christian supremacy. A rightwing plot to shape Europe’s future claims how Bannon links Breitbart’s mission to remedying the ‘crisis of our church, a crisis of our faith, a crisis of the West, and a crisis of capitalism’.

How does it achieve these aims? HOPE not Hate explains it is through the manufacturing of fake news and misreporting, which the report states are ‘crucial’ to understand. According to the authors, a common practice for Breitbart is to deliver sensationalised headlines and then gradually de-escalate from the initial headline and provide evidence for a weaker claim in the main text. A second tactic is relying on evidence that doesn’t actually support its claims, citing unavailable YouTube clips, un-cited statistics and dismissing the need to provide evidence. For example, Breitbart London writer Anne-Marie Waters wrote in her article ‘Europe’s Rape Epidemic: Western Women Will Be Sacrificed at the Altar of Mass Migration’ that ‘examples of attacks on European or Western identity are too numerous to mention’. 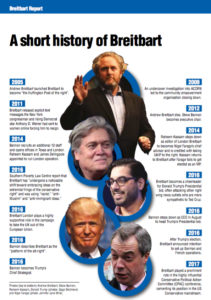 The main body of the report, as indicated by the title, is an exploration of Breitbart’s expansion into Europe and London in particular. The report explores Breitbart’s intentions to expand into France and Germany to promote the chances of Marine Le Pen in the French presidential elections and to support the anti-Muslim Alternative fűr Deutschland (AfD) in German federal elections in September – though nothing has yet materialised. However, we are told a different story about London. The report informs us about the main players of the Breitbart London team and their growing prominence in the UK and campaigns such as leaving the European Union. From James Delingpole – a ‘rightwing polemicist and climate change sceptic’ to Donna Rachel Edmunds, a UKIP MEP candidate who was slammed by her own party after claiming that business owners should be able to refuse services to women and gay people. The most prominent individual of Breitbart London is Raheem Kassam, a provocative, far-right and staunchly anti-Muslim former marketing director of the Henry Jackson Society who was responsible for shifting UKIP further to the right during the 2015 general election. The report offers a detailed account of Kassam’s background in various neoconservative organisations, his close relationship with Steve Bannon and Nigel Farage, his ‘combative personality’ and severed ties with former and current colleagues.

Has the report done a good job? Could the authors have done more?

A rightwing plot to shape Europe’s future offers a well structured and highly extensive account of Breitbart’s values, activities and future into Europe. HOPE not Hate provides compelling evidence into the central role Breitbart is playing in shaping politics and the media and more importantly, in undermining values of democracy and tolerance in the US, in London and its attempted inroads in France and Germany. We are provided with a convincing analysis of Breitbart’s practice of misreporting news and the wider aims of Breitbart. The report is suitable for those reading about Breitbart for the first time and will fascinate those already in the know – particularly useful for commentators and researchers trying to challenge the rapid rise of the alt-right and the creation of fake news. Overall, HOPE not Hate does very well in expressing the idea that we can’t undermine the influence and power of Breitbart without understanding its ideology and methods, so undermining its legitimacy and rationale.

Breitbart - A rightwing plot to shape Europe’s future by HOPE not Hate can be downloaded here (pdf file, 3mb)

WITHOUT THE COMPLETE LIBERATION OF MOTHER-AFRIKA FROM THE COLONIAL MIND-SETS; THE GYRATIONS OF FINANCE-CAPITAL AND ASSOCIATED CULTURE-LIFESTYLE-POLITICS-ECONOMICS WILL CONTINUE TO HAVOC ON THE HAVE NOTS. LANDNAHME – LAND GRABBING IS THE MONDUS OPERANDI OF THE COLONIZERS.