An imaginative project highlights migrant deaths at sea and seeks to restore traditions of humanity and rescue endangered by migration control.

The callous and deliberate failure by the Italian and Spanish governments and NATO to rescue seventy-two migrants in their drifting dinghy in a Mediterranean ‘search and rescue area’, leading to the deaths of sixty-three of them in March 2011, attracted widespread condemnation,[1] a critical report by the Council of Europe,[2] an admission of responsibility by the Italian government[3] but little by way of positive action to stop the estimated 1,500 migrant deaths each year there.[4] But an international coalition of activists, parliamentarians, artists and journalists is not prepared to allow these deaths by policy to continue. 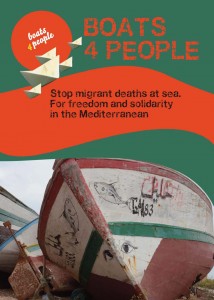 In July 2012, members of the coalition Boats 4 People will undertake a journey across the Mediterranean to mobilise support for its campaign denouncing the policies causing migrant deaths at sea and claiming respect for the law of the sea. The boat starts its journey in Cecina, Italy, with a conference on the law of the sea and the survivors’ legal action. Its journey will take the activists to Palermo (Sicily) and to a protest at detention at the harbour, and then on to Tunisia, for meetings and events in parallel with the international preparatory meeting for the World Social Forum Tunisia 2013. The events planned for Tunisia include a conference on border closure and the consequences at sea – the deaths caused by the militarised and punitive controls operated by or at the insistence of European states. The final stop on the voyage is Lampedusa, which has become the symbol of the militariation of controls and the policies of prevention and detention, where the group plans artistic activities within the framework of the Infilm festival on migration.

Migreurop, which is helping to organise the voyage, is calling on activists, migrants and supporters of solidarity networks, to join them or to offer solidarity and support. For further information download the information leaflet (pdf file, 356kb)

[1]  See eg ‘Migrant boat tragedy: UK crew may have seen doomed vessel’, Guardian, 11 April 2012. [2] Committee on Migration, Refugees and Displaced Persons, Council of Europe Parliamentary Assembly, Lives lost in the Mediterranean Sea: who is responsible?, 29 March 2012. [3] Francesco Messineo, ‘The left-to-die boat: whose responsibility for the death of 63 migrants in the Mediterranean?’, 1 April 2012. [4] ‘Mediterranean takes record as most deadly stretch of water for refugees and migrants in 2011’, UNHCR Briefing Notes, 31 January 2012.