Black Power for a new generation? 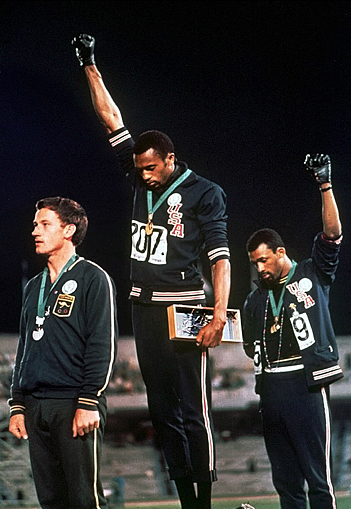 On Monday 21 May, John Carlos, the 1960s icon of Black Power, will be speaking at a meeting in London (alongside Janet Alder and Doreen Lawrence).

It is fitting that John Carlos is speaking in London just months before the Olympics circus hits town. For this is the John Carlos who, alongside Tommie Smith, raised his fist in defiance as they celebrated their wins (bronze and gold respectively) in the 200 metres at the 1968 Mexico Olympics. The iconic image is a call to arms.

1968 was a year of political protest across the world, the year in which Martin Luther King was assassinated, black workers and students were protesting across the US and anti-Vietnam war protests were taking place across the world.

In October 1968, days before the Olympics started in Mexico, hundreds of students were killed as they protested against the repressive government. According to Carlos in his new book, The John Carlos Story: ‘To the great shame of the Olympic movement, all that bloodshed and death was never mentioned once during the games nor has it ever been mentioned in any Olympics-sanctioned event ever since. I believe that they, not Tommie and me, are the true Olympic martyrs, and they must never be forgotten.’ 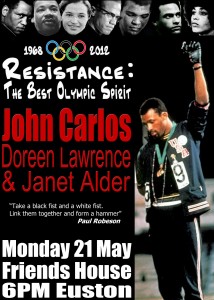 The men carried out a conscious and political act that was explosive and resulted in their expulsion from the games and far-reaching consequences to their careers and lives. As the Star Spangled Banner played, the two, wearing the  characteristic black gloves (to represent strength and unity), raised their fists in defiance and (breaking all Olympic protocols) also stood shoeless in black socks to represent the black poor. Tommie Smith also wore a black scarf to demonstrate black pride and John Carlos wore beads in memory of those lynched, with his jacket unzipped to express solidarity with workers in struggle. Peter Norman, their white Australian co-medal winner (silver) also wore the badge of the Olympic Project for Human rights in support.

The symbolic act was not an isolated one, both men belonged to the Olympic Project for Human Rights which called for disinviting apartheid South Africa and Rhodesia; to restore Muhammad Ali’s title, stripped from him when he refused to serve in the Vietnam war; and to remove Avery Brundage as head of the United States Olympic Committee.

All three of the podium protestors paid the price for their actions: ‘Peter had a beautiful soul and he endured hell when he went home to Australia… The press treated him terribly: he was the white man who stood with those two aboriginal devils… I have always said, Tommie and I had each other, but Peter was by himself… When we came back to the States, one day the press would kick my ass, then take a break and kick Tommie’s. But in Australia, they were on Peter twenty-four seven. You couldn’t even say that Peter disrespected his flag or his country. He merely wore a button supporting human rights… He was shut out of the Australian track and field world and even though he was the most accomplished sprinter in that country’s history, when Sydney hosted the Olympics in 2000, there was not even a ceremonial role to be found for Peter Norman.’ He died in 2006.

Prior to the Olympics, Carlos was also excluded from qualifying and competing in the 100 metres on a technicality, commenting ‘[I] knew that my exclusion was all political. To this day I shake my head because their big critique of us was that we were mixing politics and sports, which is supposed to be a politics free zone, and there they were, mixing politics and sports, not letting me try for the race because of my political beliefs’.

What remains to be seen is whether the already highly commercialised London Olympics will be a politics free zone.

All excerpts above are taken from The John Carlos Story by John Carlos with Dave Zirin (Haymarket Books, 2012), the book will be available for sale on Monday 21 May when John Carlos will be signing copies. The book can be purchased in the UK from Bookmarks and Turnaround Publisher Services.

I totally agree with John Carlos about the hypocrisy of the various government bodies who purport that sport should be non-political but then use their political might to ensure that sportsmen and and sportswomen cannot fight for their beliefs and freedom. I was 17 years old in 1968 and agreed totally with what John Carlos and Tommie Smith did. It transformed me from being a little too passive into becoming an active person fighting for equality, peace and justice.

I have lived in the UK for 40 years, and I appalled at the racist attitudes amongst people even after incidents which should make the politicians wake up and smell reality, instead they bury their political heads in other matters in order to bury the real issues which is growing in every form of society. Sport will never be free from racism. Life will never be free from racism, until we all realise that we all pump the same colour blood, WE ARE ALL DIFFERENT BUT WE ARE ALL EQUAL.
Following on from Patricia’s comment, I too was only 17 and not very much in realising what Racism really was , until Muhammed Ali was stripped of his crown, then I started to put together the reasons, and looked at the consequences of Racism, and have experienced it every day since I arrived in this country 40 years ago.
The Uk unfortunately follows every thing that the Yankees do, so it follows that this country will become and is becoming the second most Racist country in the world in the very near future… HOW SAD IS THAT?

As a young boy in 1968 the image of John Carlos and Tommy Smith is still fresh in my mind to this day,seeing those two brothers giving that Black Power salute was a great symbolic moment for me growing up in London in the 60s when positive images of blackness were limited.I can’t wait to buy John’s new book and salute all three men for there brave stance.