The July 2013 issue of Race & Class examines Black Power, Garveyism, the co-option of black music and the work of radical poet Peter Blackman.

In the July 2013 issue of Race & Class – ‘Black History – Black Politics’ – Jonathan Fenderson argues that the idea of Black Power is being gentrified by US scholars who, ceding to the demands of the publishing market, seek to connect the Black Radical Tradition with Barack Obama’s presidency, revising and liberalising Black history in the process. 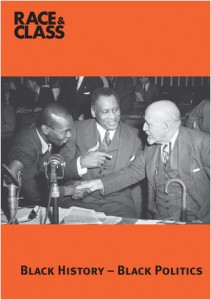 Chris Searle discusses the life of black revolutionary poet Peter Blackman – from ‘colonised’ schoolboy and missionary to Africa to railway worker in north London and sets his writing – especially his language – in the context of twentieth-century West Indian literature. Blackman, who befriended Paul Robeson in London and dedicated works to Claudia Jones, was clearly at the vortex of progressive black cultural expression, but has hitherto been overlooked.

Also in this issue, Adam Ewing unpacks the significance of Garveyism in Caribbean labour politics after the first world war. Shana L. Redmond examines the ways in which corporations have co-opted Black music for their own ends. And Katrina Hirvonen looks at attitudes towards undocumented children in Sweden reflecting on the relationship between offline and online worlds and suggesting that extremist sites provide echo chambers for far-right opinion.