Battling against the odds 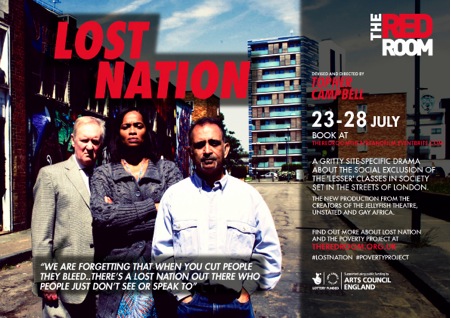 A combination of documentary and theatre in north London looks at twenty-first century poverty from the point of view of those experiencing it.

Lost Nation, by Red Room Productions, explores the human cost of the government’s politics of austerity. Beginning with a short film, local Brent residents explain in detail the realities of low wage or no wage Britain, how they got there and how they interact with the welfare system – itself the victim of state assault.

As is made clear, these are the voices and stories of a parallel nation – one kept from public consciousness. Each of the interviewees is painstakingly aware of how they are portrayed: vilified as scroungers or shirkers by a seemingly endless procession of political figures whose statements, in turn, are regurgitated by the mainstream press. Each is adroitly capable of showing the absurdity of these claims. One woman, unable to work, explains the difficulty of trying to provide for her children after being declared ‘intentionally homeless’ (she had inherited land abroad which, according to the DWP, disqualified her for support). One man with a disability explains his never-ending search for jobs that are constantly disappearing. A local councillor describes the absurdity of being forced, through lack of alternative options, to uproot families and decant them to the far edges of the city, or even to the Midlands. Another resident describes the futility of having to relentlessly call their contracted housing provider to fix something which they themselves are more than capable of fixing, but which their tenancy contract forbids them from doing. If these are some of the nation’s lost voices, then this loss is compounded by welfare reforms which appear designed to ensure people lose their dignity.

And yet they don’t. Amidst the stories of human damage there are stories of quiet resistance and small victories. A local activist describes his attempts to organise against the continuous imposition of poverty. A homeless woman explains how she has managed to set up and keep going a small social enterprise, refusing to compromise her ethics and values in the meantime.

But there is at least one more form of loss explored in this drama. In this short run, the film is followed by a different person’s story every evening. After Wednesday’s performance, we witnessed the monologue of a man who used to work in accountancy. Finding himself unemployed, he is perplexed by the benefits system. Set against the Kafkaesque backdrop of a stage made up entirely of benefit claims forms, he struggles to deal both with the injustices he has experienced in losing his job, and his own snobbery which occasionally rises to the surface. His plan (although, perhaps slightly tongue-in-cheek) for a two-tier benefits system, with the upper level reserved for ‘professional’ job-seekers like himself and the lower level for the ‘uneducated’, indicate how solidarity can so easily be lost in a political climate which is so divisive by intent.

Lost Nation is not without its flaws. But what it shows, quite clearly, is how the attack on welfare, which is legitimised through claims of a bankrupt Britain, is itself morally bankrupt. And, as it sets out to, by giving a voice to those from a lost nation, it speaks out against injustice.