Barbara Harlow – insistently against the stream 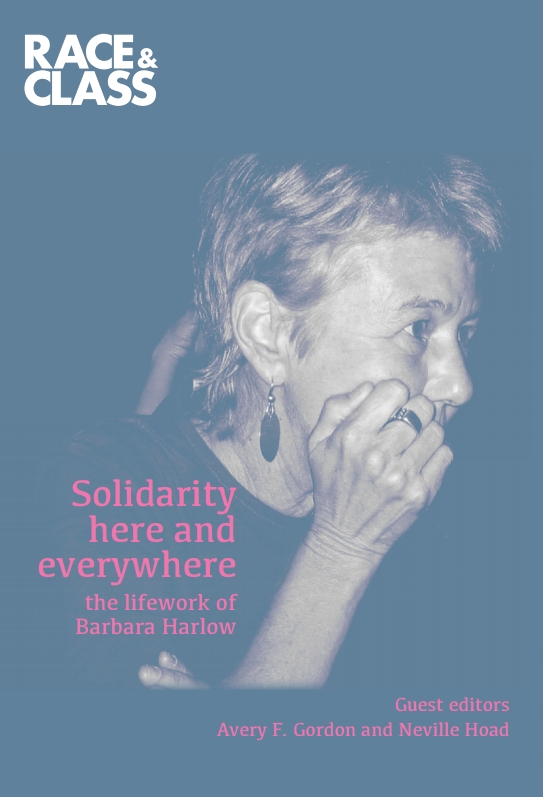 This week, the IRR publishes a memorial issue of Race & Class celebrating the lifework of the late Barbara Harlow, Solidarity here and everywhere.

Barbara Harlow, a Professor of English and Comparative Literature at the University of Texas at Austin described as ‘a critic of both the world and the text’, profoundly shaped the fields of feminist and post-colonial theories, Middle Eastern and African literatures and gender studies. She taught academics to remain true to being radical. As critic, activist and teacher, she has been compared to her contemporary Edward Said, who coined the phrase ‘solidarity here and everywhere’, used to title this issue.

Guest-edited by Avery F. Gordon professor of sociology at UCSB and a member of the journal’s Editorial Working Committee and Neville Hoad, a colleague of Barbara’s at the University of Texas, this issue of Race & Class brings together excerpts from Harlow’s unpublished works, comments and pieces by those who worked with her or were influenced by her and a comprehensive bibliography of her considerable life’s output.

In ‘The Subversive Pencil: writing, prison and political status’, Avery F. Gordon situates Harlow as a unique literary critic whose work crosses geopolitical and disciplinary borders; and whose interventions were made in commitment to her liberatory agendas. Gordon revisits Harlow’s Barred women, writing and political detention – one of the first texts to treat prisons as central to resistance movements.

Mia Carter, University of Texas, Austin, who co-edited three volumes on Archives of Empire (2003) with Harlow, describes the collaborative work that was central to their praxis as they grappled with documents from the past and their relevance to the present. As Carter writes, ‘what resistance to today’s imperial schemes and military designs might look like was the necessary questions that Harlow required her students, colleagues and comrades to wrestle with seriously, undespairingly, fiercely’.

At the heart of the issue is material from two of Harlow’s ongoing projects – a biography on Ruth First, the South African anti-apartheid activist who was assassinated in 1982 and a prospective book on drones, examining fiction and non-fiction to show how drone warfare challenges human rights.

Harlow made a significant contribution to upholding this journal’s distinct tradition of publishing articles that connect theory to the struggle against racism and imperialism. She was a dedicated book reviewer, and wrote a total of thirty-two reviews for Race & Class alone. We publish online a selection of ten reviews by Harlow, including her important award-winning 2011 review essay, ‘Extraordinary renditions: tales of Guantánamo’.

‘Her work was prolific, energetic, and adhered to a consistent vision of the actual legal, political, and civic realities of our times’, writes Timothy Brennan, ‘and this forging of a new road was tirelessly her own, and quietly – although insistently – against the stream’. We hope the issue will bring Harlow’s work to a whole new generation of students and activists, and (in words borrowed from the issue) pay forward our debt to her, here and everywhere.

An appreciation of Barbara Harlow by Timothy Brennan