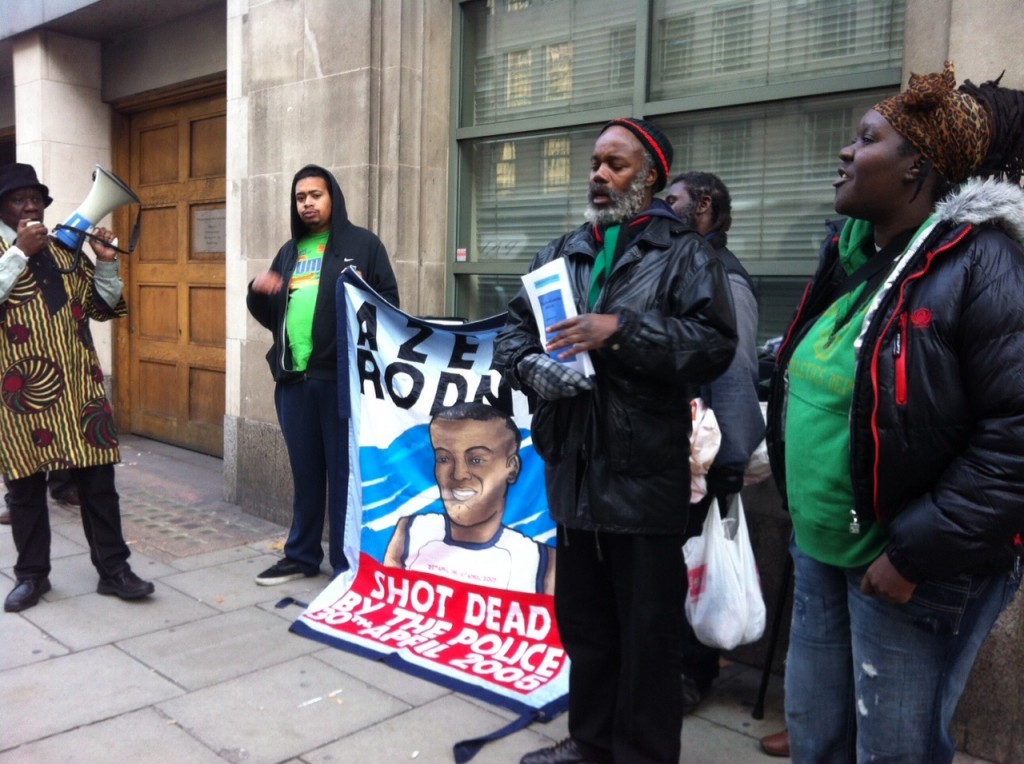 This week, the Azelle Rodney Inquiry heard from the police officer, known only as E7, who had shot 24-year-old Azelle six times, (including twice in the head), as he sat in the back of a car in Edgware, north London in April 2005.

Echo 7/E7, now retired, told the inquiry that he had also killed two others in the ‘80s (Channel 4 News revealed they were killed in an ambush of armed robbers in Plumstead). E7 also served in the notorious Special Patrol Group (which was implicated in the death of Blair Peach at an anti-racist demonstration in Southall in 1979). He has also killed a dog in the line of duty and was arrested in December 2000 after a fight at a London nightclub for which he received a written warning. While giving evidence, the officer sounded as if he was a little overcome. At this, Susan Alexander, Azelle’s mother called out ‘How many more lies are you going to tell’, and walked out of the inquiry.

The family of Azelle Rodney have had to wait for over seven years to hear from the police officers involved in his death. The coroner was unable to proceed with a full inquest after police refused to reveal all of their evidence, as large portions of the police officers’ statements had been crossed out under the Regulation of Investigatory Powers Act (RIPA) 2000, which covers information obtained from covert surveillance devices such as telephone taps or bugs.

After much legal wrangling, the government came up with the ‘solution’ of an inquiry before a retired judge ‘To ascertain by inquiring how, where and in what circumstances Azelle Rodney came by his death on 30 April 2005 and then to make any such recommendations as may seem appropriate.’ Certain witnesses have been granted anonymity and the public is not allowed into the court when they give evidence. So when E7 was giving evidence, the public and media were seated in an annex watching lawyers on TV screens and only able to hear, not see, E7.

The inquiry has already run into problems, with the Met police, going to the High Court for a judicial review of the decision by the chairman, Sir Christopher Holland, to allow members of the legal team for Mr Rodney’s mother, Susan Alexander, to see the aerial video footage of the two hours prior to the shooting. The police were overruled.

The inquiry, which commenced in September and is due to go on at least until Christmas, is open to the public, Monday-Thursday and family of Azelle Rodney are actively encouraging people to attend. The hearings are taking place in Court 80 at the Principal Registry of the Family Division, First Avenue House, 42-49 High Holborn, London WC1V 6NP.

Transcripts of the inquiry

Live stream of the hearings