An interview with a spokesperson from Antirassisistischer und Antifaschister Ratschlag.

European government counter-extremism policies which classify fascism as just another form of contemporary extremism (which also includes Left extremism and in some cases anti-fascism) are being resisted by victim support groups in Germany. In 2012, at a time when the federal government was attempting to impose a loyalty clause on all funded organisations under which they would have to abide by the security services definition of extremism, the organisation AKuBiZ refused to accept the Saxony Democracy Award for its work countering neo-Nazism on the grounds that to do so would signal acceptance of the clause. (Read an IRR News story: ‘German counter-extremism programme – a “spying charter”‘). Each year, anti-racists in Thuringia, uniting under the umbrella of Anti-racist and Anti-fascist Advice in Thuringia (Antirassisistischer und Antifaschister Ratschlag) come together to organise an annual congress on racism and fascism. The preparatory group for the Ratschlag has become the latest anti-fascist organisation to turn down an award from the federal government for countering extremism which it was going to receive at a special ceremony in Chemnitz, Saxony in April. IRR News spoke to a spokesperson from the Ratschlag’s preparatory group about the wider politics that informed their decision.

Liz Fekete: We understand that your work against racism and fascism was recognised by the authorities and you were awarded a prize of €4000. Who was the prize from, and what was it for?

Ratschlag: The prize was from a federal government programme called Bündnis für Demokratie und Toleranz – gegen Extremismus und Gewalt (Alliance for Democracy and Tolerance – against Extremism and Violence). It was for the organisation of the ‘22th Ratschlag’, a congress we had in November 2012 on the theme of Nazism in East Germany. It  attracted around 300 participants who considered issues relating to Nazism in East Germany with workshops and discussions on themes such as White Power music, the National Socialist Underground, Thilo Sarrazin and the New Right, policing, sexism in left-wing groups, anti-fascist history and education.

Why did you refuse the award?

We were one of eleven organisations from Saxony, Thuringia and Saxony-Anhalt to be awarded the prize. We decided to read out a statement at the ceremony which identified the two reasons we could not accept the award. The first was the award was made under a programme aimed not at countering racism and fascism specifically but against a more generalised ‘extremism’ (which includes ‘dangerous left-wingers’ as well as ‘foreigners’ extremism’). But the second reason was that the actual prize was to be awarded by Dr Uwe Backes who is the Acting Director of the Hannah Arendt Institut für Totalitarismusforschung (Hannah Arendt Institute for Research on Totalitarianism) and one of the originators of the government’s ‘extremism’ framework. 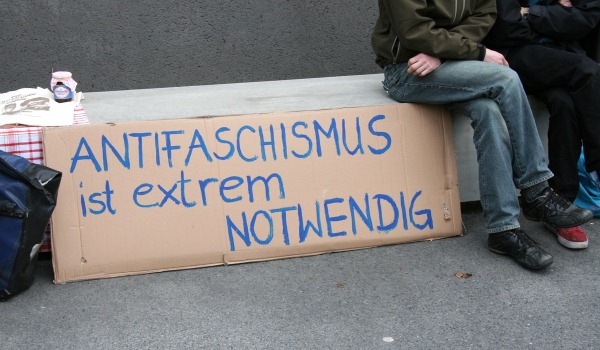 We disagree with the aims of this Institute, the research of which stems from a framework which compares the ‘two German dictatorships of the twentieth century’. It draws an equation, which we cannot support, between the former GDR and Nazi-Germany. Not only that, but criticism of anti-fascism within an anti-totalitarian framework is also commonplace within this Institute. For instance, Lothar Fritze, one of Backes’ academic staff, condemned Georg Elser for his 1939 assassination attempt on Hitler and suggested that Winston Churchill was partly responsible for the Holocaust.[1] Nor does the Hannah Arendt Institute take a critical stance on things like historical revisionism or the emergence of the New Right.

The idea of ‘cumulative extremism’- the notion that one form of extremism triggers off another in a cycle of tit for tat violence – has become all the vogue in the UK. How does it play out in Germany?

The current framework for discussion on extremism in Germany serves to legitimise repression against anyone whose criticism of the current political state of things is perceived to go too far. It equates those who fight for more participation, freedom and social justice with those who fight for less of the above. The logic of this approach to extremism makes it look as though inhumanity, historically, has been a problem of what goes on at the margins of society, obscuring the fact that many ordinary people also share racist, anti- Semitic and social exclusionary views. It seems to us that the purpose of this discourse against extremism is to exclude all radical critiques (and critics)  from debate and establish that what is radical is beyond the pale of legitimate opinion.

What was the reaction of the authorities when you refused the award? Do you think it has made a difference?  Did you get support from other anti-racist/anti-fascist organisations?

The authorities did not care about our decision. But other anti-racist/anti-fascist organisations congratulated us for taking a principled stance. In fact, around half of the organisations that decided to accept the award applauded when we read out our statement of refusal. I assume most anti-fascists are not happy with this particular award – but because many of them are very small, they rely on every little bit of money they can get.

Is the future of your anti-racist, anti-fascist organisation secure? We hear that many organisations supporting the victims of racist and fascist violence are having their funding cut. It seems to us that anti-fascism can only be effective if it is embedded in local communities, but that many European governments seem threatened by this.

We made it for years without this ‘extremism money’ and I’m confident we’ll make it another year too! But that’s only possible because the Ratschlag is organised and supported by many groups and people, most of them working in their spare time.

But let’s talk about the general financial state of anti-fascism in Germany. In the 1990s, or earlier, there was no possibility of getting money for anti-fascist projects. Since 2000 the federal government and the Bundeslaender [sixteen individual States] started to fund certain anti-fascist projects – of course not the radical and difficult ones and of course not without the idea of getting anti-fascism under control. The current talk about extremism enforces that.