Another preventable death in immigration detention?

According to reports in the press[1], Christine Case was heard calling for help and had complained of chest pains shortly before she suffered a heart attack. The emergency services were called around 8am but she was pronounced dead at Yarl’s Wood at 8.47am. The centre, run by Serco on behalf of the UK Border Agency holds up to 405 women and their families and its healthcare is contracted out to Serco Healthcare.

The authorities have been sparse with their details about the death. On 31 March, the Home Office press office told IRR News: ‘There is due to be a question answered on this by a Home Office minister in the Commons shortly. We do not have a press release on this. If you watch BBC Parliament, you can see the question being answered.’ And immigration minister James Brokenshire didn’t tell parliament very much either. He offered his ‘very sincere condolences to the family of the woman who died’, and added that: ‘Once police inquiries are concluded, the established process is that the prisons and probation ombudsman will begin an investigation.’ 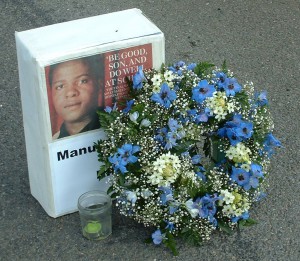 Yarl’s Wood has had a somewhat chequered history. It was the scene of a major fire on Valentine’s Day 2002, which resulted in half of the centre being burnt down after a disturbance, which was triggered by G4S guards who restrained a 52-year-old Nigerian woman on her way to church. In September 2005, Manuel Bravo took his own life at the centre on the day he was due to be deported after he was detained with his young son.

Concerns over health provision in detention

Although we cannot know for a while the exact circumstances surrounding Christine Case’s death, we do know that there have been repeated concerns about deaths in immigration detention. Just a few weeks ago the Prisons and Probation Service Ombudsman (PPO) for England and Wales published a Learning Lessons Bulletin on the investigation of fatal incidents in removal centres and complaints from detainees. He reported that: ‘Thankfully there have been relatively few deaths in IRCs since my office began investigating fatal incidents in 2004, but unfortunately some of the same issues continue to emerge. In particular, it is disappointing that we have frequently had to highlight the lack of clear and effective systems to ensure that the nature of an emergency is correctly communicated, and that healthcare and detention staff working in IRCs are sufficiently trained and equipped to deal with medical emergencies.’[2] The PPO found the lack of progress unacceptable as recommendations for improved emergency responses had been made in 2004 and again more recently in 2011 following deaths. Furthermore the PPO also raised concerns that three current investigations (not covered by the bulletin) had similar issues around the ‘inadequate emergency response … the lack of an emergency code system, delays in calling an ambulance and healthcare staff not accessing emergency equipment quickly enough.’

One of the deaths covered by the Learning Lessons Bulletin is that of Muhammad Shukat, a 47-year-old Pakistani man who died after suffering a heart attack in Colnbrook on 2 July 2011. In May 2012, an inquest jury recorded a highly critical verdict that found that neglect contributed to his death. He was held at Harmondsworth for nearly a month, during which time he withdrew his claim for asylum and had asked for assisted voluntary return. He was transferred to Colnbrook on 29 June (at 1am in the morning) and died just a few days later. While he was held at Harmondsworth he made a complaint about healthcare at the centre that was not followed up. Staff at the healthcare unit also failed to obtain his medical records despite him signing a release form. These records ‘could have provided significant information that could have assisted healthcare staff [at Colnbrook] on the morning he died.’ The PPO made thirteen recommendations following its investigation into Muhammad Shukat’s care at Harmondsworth and Colnbrook, commenting: ‘These are intended to ensure that lessons are learned from his death and, although these are directed at Harmondsworth and Colnbrook, I hope that the UK Border Agency (UKBA) will take the opportunity to share the learning across their detention estate. In particular, recommendations are made covering responses to emergencies and treatment of possible heart attacks…’[3]

There have been fourteen deaths in the last ten years in immigration removal centres, and twenty since 1989[4]. Eliud Nguli Nyenze a 40-year-old Kenyan man died at Oakington removal centre in Cambridge after suffering heart problems in April 2010. On the night of his death he was refused paracetamol after complaining of feeling unwell – G4S staff were unable to prescribe medicines during the night. The inquest was also told that an ambulance took twenty minutes to reach the centre and the nurse who went to treat him did not take a defibrillator with her. The Home Office pathologist could find no cause of death but suggested sudden adult death syndrome. The coroner recorded a verdict that he died of natural causes. And a year ago, on 30 March 2013, Khalid Shahzad, a 52-year-old Pakistani man died (unaccompanied) on a train to the north-west hours after he was released on medical grounds from Colnbrook.

Of course it will probably be a few years before we actually find out what happened to Christine Case as full inquests in to deaths in custody usually tend to take years to hold.