Another deportation death in Europe

An Iraqi man, who collapsed and died in Sweden following a deportation attempt, is the seventeenth deportee to die in Europe since 1991.

Questions are mounting about the death of a 45-year-old man, who had worked for the US military in Iraq and lived in Sweden for eight years. The man, who is named in the press simply as ‘Adnan’, had lost consciousness during the attempted deportation which took place on 17 March. Even though he still had a pulse, he was taken from Stockholm Arlanda airport to Karolinska University Hospital in the back of a police van, and this despite the fact that an acute emergency care unit was available at the airport. He was pronounced dead on arrival at the hospital, thirty-eight kilometres from the airport. The Swedish prosecution service has opened an investigation into possible manslaughter.

Placed in a body belt and held in a dangerous hold 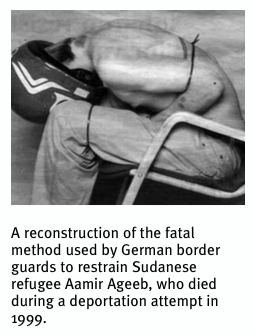 Five escorts accompanied Adnan who was handcuffed and due to be returned to Iraq on a Turkish Airlines flight, via a stopover in Istanbul. When he resisted, he was taken to the back of the plane and a body belt was placed around his waist.

An internal document of the prison service, seen by journalists at the Swedish National Radio programme Konflikt, suggests that one person present during the deportation attempt warned the escort officers that they were holding the Iraqi man in a dangerous hold. Swedish police and probation services have declined to comment, citing a pending investigation. Turkish Airlines have suspended all deportations from Sweden saying that it is saddened by the death and has no desire to continue with expulsions for the foreseeable future.

Journalists from Konflikt broadcasted an appeal for witnesses on board Turkish Airlines flight TK1796, leaving Arlanda for Istanbul on 17 March at 5.30pm, to come forward.

Seventeen men and women are known to have died during deportation attempts from Europe since 1991. Deaths have occurred in France (4), Switzerland (3), Germany (2), UK (2), Hungary (1), Austria (1), Belgium (1), Netherlands (1) and Spain (1), but this is the first recorded deportation death that has taken place in Sweden. No escorting officer has ever served a prison sentence following the death of a deportee, although the escorts of Joy Gardner, Jimmy Mubenga, Marcus Omofuma, Khaled Abuzarifeh and Semira Adamu were brought to trial for manslaughter.

In two cases (Marcus Omofuma and Semira Adamu) deportation officers were convicted of manslaughter. But despite the convictions, the officers were allowed to continue to serve in the police force, having been given suspended sentences by judges who, in passing judgement, stressed the difficult circumstances the deportation police work under. In the case of Kole Bankole, a doctor was convicted for ‘failing to render assistance’, and in the case of Khaled Abuzarifeh, a doctor was convicted of manslaughter. Both doctors were fined, with the doctor in the Abuzarifeh case given a five month suspended prison sentence, reduced to three months on appeal.

The deaths usually follow a predictable, violent pattern. The ‘cushion technique’ was abandoned in 1998 following the death of Semira Adamu in Belgium. (A video had emerged showing the police officers cracking jokes while holding a cushion over Adamu’s mouth.) Then a specially designed motorbike helmet tightly strapped to the head was banned after their use during the deaths of Marcus Omofuma and Aamir Ageeb. (There are indications that some countries are considering bringing it back).

Or it can be shackles such as body belts, hand and feet cuffs being used to force people into compliance. And other methods of forced immobilisation can be applied such as the placing of deportees in uncomfortable stress positions or the use of adhesive tape to bind deportees further. Sedation has been in deportation attempts, but, following the deaths of Arumugam Kanapathipillai, Kole Bankole, Semira Adamu and Khaled Abuzarifeh, the danger of sedatives, sometimes delivered in very large doses, was gradually acknowledged.  In most cases, the official cause of deportation deaths is recorded as either cardiac arrest or positional asphyxiation (i.e. suffocation). Amnesty International warned in 2002, following the death of Ricardo Barrientos in France, that expert advice on positional asphyxia had proved that handcuffing a person behind his back can restrict the ability to breathe, while any weight applied to the back in this position – such as pressure applied by a police or immigration escort – can restrict breathing further.

If you were on the Turkish Airlines flight, and witnessed the forcible restraint of the Iraqi deportee, please email ivar.ekman@sr.se, or telephone (00 46) 878 42880. 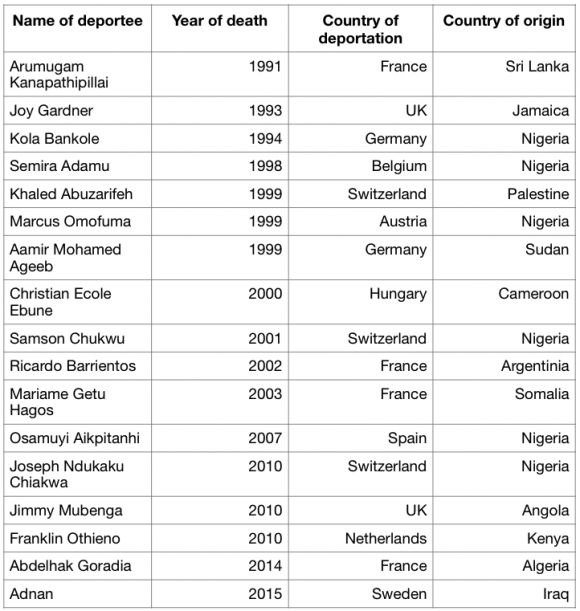 Thanks to Lotta Holmberg for her help in compiling this report.

An update on this case by Lotta Holmberg in Stockholm has been sent to IRR… According to a special investigation by journalist Sofia Boo broadcast on Swedish National Radio on 28 November 2016, it has now been confirmed that the escorts used a highly dangerous restraint technique which was condemned by John Parkes, a medical expert from Coventry University who was interviewed for the programme. In fact this restraint technique is NOT used by Swedish police in the general course of their duties. But despite the death of the Iraqi refugee, and despite the ongoing manslaughter investigations, the Swedish deportation authorities continue to use the technique which is, only now, as a result of the radio investigation, under review.