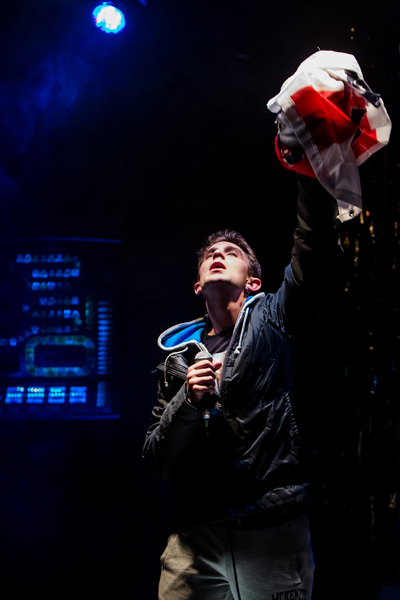 A dramatic exploration of fascism is needed in the UK, but unfortunately Albion does not provide this.

How do we explain the rise of the far Right in Britain? This is the question at the heart of Albion, a play by Chris Thompson, which ends up titillating its audience but providing few answers.

Set in an East End pub, it focuses on the lives of members of the fictional far-right group the English Protection Army: its white leader, its black deputy and the leader’s gay younger brother, as well as a social worker who ends up becoming a supporter. In a convoluted plot, the deputy’s girlfriend (and the other two EPA members’ sister), a soldier, is killed, by a roadside bomb in Afghanistan. The younger brother embarks on a relationship with an Asian man. There is a power struggle within the EPA. The social worker undergoes an epiphany (partly as a result of being scapegoated by her seniors when a white girl is sexually abused by Muslim men) and sees the evil of political correctness. All of this is told through a combination of dialogue and karaoke. And on a plus point, the actors are often quite good singers.

Unfortunately, there are not many more positive things to say. Fundamentally, this play collapses under its delusion as to what it is and what it thinks it is. The writer seems to see himself as some kind of truth-sayer, forcing the audience to confront their comfortable views about the far Right. ‘I can’t think of anything more tedious than the “liberal” version of this play’, he argues: one that allows the audience to come out ‘feeling smug, self-satisfied and superior’. It is for this reason, it can be assumed, that the far-right’s perceptions of itself are never subjected to anything approaching informed analysis. What is cobbled together is little more than an EDL-esque shopping list of world-views in what quickly becomes an overly-long stage performance. These include the murder of Lee Rigby, grooming, state-sanctioned multiculturalism (the council’s cultural picnic), migrant workers taking peoples jobs, schools serving halal meat and so on.

True, there is a BBC journalist who voices her disgust at the EPA’s perspectives (ironically, in fact, given the way that the media has actually often given far-right leaders an easy ride in interviews). True, the play’s characters’ uneasy alliance is at times threatened by the contradictions of their own bigotries. But, when it comes down to it, the play never challenges the British far Right’s grievance-laden narrative of itself as a product of  the ways in which working-class communities are censored and abandoned by a liberal elite, their views silenced through a discourse of ‘celebrating diversity’. In fact, it seems to support this. And yet, if the writer’s aim is to provide a defence of the white working-class, it is unclear why at one point it seems to provide the framework for a white-working girl to be sneered at by the audience through her ‘humorous’ graduation from Primark to New Look clothes.

At times, it feels like the play is trying to shock, simply for the sake of shocking, such as when the EPA leader shouts ‘We’re the new fucking n*****s’. At others, the impression is formed that the writer genuinely thinks it is subversive to suggest that some far Right groups can have gay or black members, and can adapt to utilise santitised languages of ‘diversity’. Ultimately though, for a play that bases itself on trying to unsettle smug and superior liberal understandings of the far Right, it ends up simply reinforcing them.