Against ‘law and order’ lockup 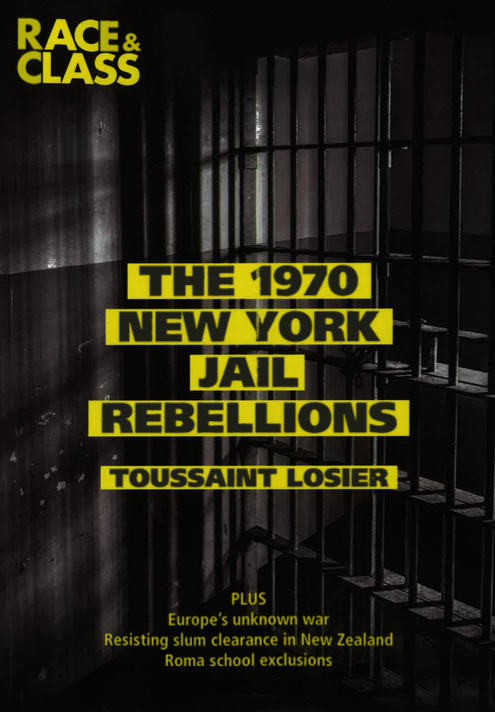 The July 2017 issue of Race & Class is now available and you can download the lead article for free (for a limited time only).

The July 2017 issue of Race & Class leads with a double-length narrative history of the little known New York City jail riots of the 1970s which predated that at Attica. Toussaint Losier, assistant professor of Afro-American Studies at the University of Massachusetts, Amherst, examines the roles of the Black Panther Party and the Young Lords in organising revolts alongside working-class detainees suffering preventive detention because they were too poor to afford bail, the response from Mayor John Lindsay and the winning of unprecedented bail review hearings. Though short-lived, these events shed light on the contested legacy of preventive detention, a crucial strategic reminder amidst today’s resurgence in ‘law and order’ rhetoric and practice. Read here.

Forthcoming in the January 2018 issue of Race & Class, Elizabeth Jones assistant professor of Pan-African Studies at the University of Louisville will show how the burden of fines and fees still punish the US’ black poor. To coincide with the publication of ‘Against “law and order” lockup’, Race & Class has made available from its archives ‘a powerful radical syllabus on prisons, race and resistance’ – download for free here.

Also in July 2017 Race & Class, a brilliant race/class analysis from Wilhelm Londoňo and Pablo Alonso González of the current-day fate of Raizals (descendants of slaves taken to islands in the Caribbean Sea by the British) who have their culture recast as ‘heritage’ and have become proletarianised in the tourist industries owned by mainland Colombians.

At 73 years old and recently fully converted from Judaism to Christianity (I am in fact a Christian Spiritist and a medium). In my years of experience the biggest homophobic (I am gay) and antisemitism has come from the police forces in England – Especially in Blackpool (Lancashire). I have alo found out that the biggest problem I have had over homophobia (which a police falsified case against me is still going on to trial) This – believe it or not is because of a Muslim ex postmaster in Blackpool North falsifying allegations against me for the second time – the last time was in 2011 when in Crown Court I was found NOT GUILTY. – and again there is absolutely no evidence at all against me for these so called offences. The case is on December 19th this year and the police of course are assuming my guilt and hoping I will be in court prison for Christmas. The police in Blackpool Lancashire are indeed so evil. Blackpool has gone right down.