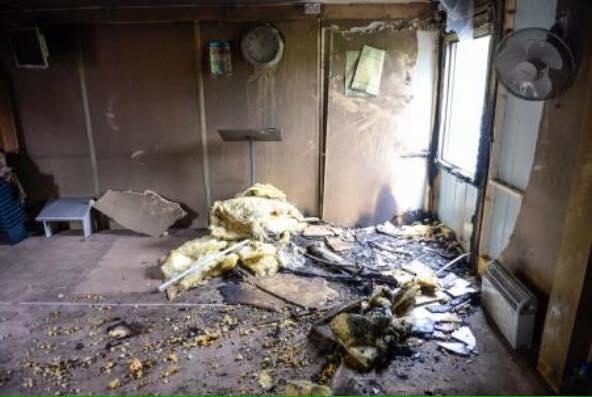 An overview of anti-Muslim violence and abuse in the UK since the Paris attacks.

The terrorist attacks in Paris last month, killing 130 people and injuring 368 more, have been followed by anti-Muslim violence across Europe. In the UK, sixty-four religious or racially motivated hate crimes were reported to the police in Scotland in the week that followed, almost as many as were reported in the whole previous year. In London, the seventy-six ‘Islamophobic incidents’ that were reported to the police in that same week were triple the number reported in the previous one. The UK-wide anti-Muslim hate crime reporting body Tell Mama says that there had been a 300 per cent increase in the number of incidents it had recorded, with 115 reports – the victims being mostly women and girls.

This combination of violence and threats is not new, of course, but according to one writer for the Guardian, its impacts are changing. ‘Since the Paris attacks’, she said, ‘I have been more frightened than ever’.

‘The new normal’, the Islamic Human Rights Commission recently argued, is the environment within which Muslims are now ‘assumed guilty of terrorism by association’. And in this context, the spate of attacks and abuse that are certainly now increasing after the events in Paris should not be divorced, also, from the state’s hyper-surveillance of Muslims, the new duties to report on potential extremists, the heightened demand for declarations of loyalty to ‘British’ values and a backdrop of criminalisation. These attacks include the assault of 53-year-old Mohammed Khalid by a group of people as he closed his Fife takeaway a day after the terrorist murders. The perpetrators, shouting racist abuse and ‘ISIS’, left him needing hospital treatment for a serious eye injury, and assaulted his wife who went to his aid.

They include the firebombing of a cultural centre a few days later in Glasgow, the vandalism of two mosques in Newport and the attempted arson attack on Finsbury Park mosque. A house in County Antrim has been targeted by petrol bombers, most possibly because a Muslim lived there. And near the end of November, a 17-year-old in Cheltenham was assaulted by two men shouting ‘terrorist’, who beat him with golf clubs. When the boy’s uncle and father found the attackers, they themselves were racially abused, before the attackers fled. Speaking to a local newspaper after the events, the family said they did not want to give their surnames for fear of reprisals.

No doubt this physical violence is an expression of how some people are determined to rid their area of Muslims. 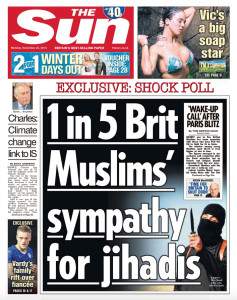 A car wash in South Tyneside, destroyed in a suspected arson attack, was daubed with graffiti including the words ‘Muslim’ and  ‘rats be gone pronto’. And such violence takes place at a time when narratives conflating ‘asylum’, ‘Muslim’ and ‘terror’ are rife. ‘Is Isis actually the beating heart of Islam?’, asked Sun columnist Kelvin Mackenzie recently, before calling on David Cameron to ‘pull up the drawbridge’ to migrants until ‘we are certain we are not importing our own destruction’. Soon after came the same paper’s now infamous front page headline claiming that a fifth of Muslims in Britain had sympathy for Isis fighters, which it had based on a misleading, facile opinion poll. The Daily Mail, meanwhile, has produced a cartoon which has been likened to Nazi propaganda, for its depiction of Muslims and rats walking towards a sign saying ‘Welcome to Europe’.

As the bombing campaign of Syria gets underway, this ‘welcome’ will no doubt be extended to more refugees.

A selection of anti-Muslim attacks and incidents in the UK in the weeks following the Paris murders:

IRR News: ‘”Hotspots” for asylum applications: some things we urgently need to know‘

I think Muslims should also change their attitude towards Christians as they do not buy from a Christian shop, do not eat from their hotel, do not share ideas and do not participate in their social programs. Muslim religious groups collect money and sent to Taliban, Lashkar-e-Toiba, and terrorist organization in South Asia and Africa, why? because they don’t consider themselves as part of community. I personally heard in a East London Mosque, a religious cleric said that looting the wealth of Christians and doing fraud with council is justified by Islam, because they are Kafirs. In view of this unacceptable attitude of the Muslim extremists, we can expect more attacks against Muslims across the UK.