Adnan Olbeh: killed by the state 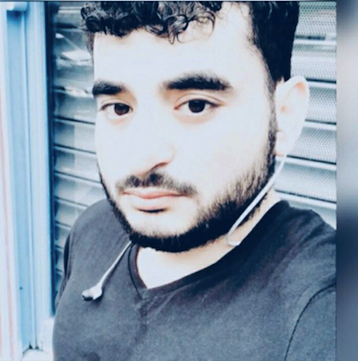 The death of Adnan Olbeh on 5 May in a Glasgow ‘asylum’ hotel raises serious questions as to what is happening to former immigration detainees during the lockdown. John Grayson of South Yorkshire Migration & Asylum Action Group continues his investigations.

Ivor, a professional worker from the Middle East, was already reporting on conditions in the McLays asylum hotel in Glasgow to SYMAAG when, on Tuesday 5 May, he rang us in real distress.  ‘A guy called Adnan has been found dead in my hotel. I knew him, he was a really nice man. This is terrible.’ Ivor sent pictures of police vehicles outside the hotel. He rang the next day, angry that Adnan was being spoken about as if he was an ‘addict on the street’.

In the following days, reports in the Scottish press continued to use an ‘overdose’ narrative when describing the death. The Ferret reported his ‘friends’ saying that Adnan ‘had addiction issues’. The National report quoted anonymous sources who said that Adnan had ‘developed drug problems whilst in the asylum system’. The press also speculated on suicide as a cause of death, despite it being unlikely since Adnan was Muslim. Press reports also attracted racist responses in comments sections like the one in the Glasgow Evening Times, so extreme that PAIH (Positive Action In Housing) issued a statement saying that ‘There’s a difference between freedom of speech and a toilet wall’, and in protest refused to put out a press release and published instead, on its own website, details of Adnan’s death.

On the Tuesday, after Ivor contacted us, we informed the official refugee agencies in Glasgow. I spoke later to Smina Akhtar, an activist in Glasgow and a research student at Glasgow University, who told me that the No Evictions Network, was not given information about the death until the following Friday. An activist found out from a resident and a vigil was held the next day, outside the hotel.

Ivor had told us that Adnan was a Kurdish Syrian. From speaking to Smina and other sources I was able to reconstruct some of the last few years of Adnan’s horrific journey to that hotel in Glasgow – a journey to find some kind of safety and work to help support his relatives in Syria.

Adnan had left Syria in 2012 and eventually entered Libya where he found work. Like thousands of other migrants Adnan was captured and tortured – an experience his friends said stayed with him in flashbacks through to his last days in the Glasgow hotel. After a year in Libya, Adnan got across the Mediterranean to Italy. He travelled across Europe and reached Denmark, where he stayed for over four years. The Danish authorities gave him a temporary residency document which allowed him to work there until 2019. A change of government saw Adnan’s friends being deported, so he decided to travel to London and to work there when his Danish permit expired.

Then Adnan started to experience the racist hostile environment British governments have constructed to welcome refugees to the UK. Adnan could not legally work in London, so he decided to claim asylum. Then instead of being sent to one of the six Initial Accommodation centres in the UK and onward to asylum housing, to wait for the outcome of his claim for asylum.

Smina Akhtar told me “Adnan he was sent directly to Dungavel detention centre in Scotland, I don’t know why.”

So, Adnan, with his traumatic history of imprisonment and torture, found himself held in a British secure detention centre — indefinitely. The emergence of the Covid-19 virus in the UK meant that detention centres (after legal action from campaigners) began to close or be emptied. As Dungavel was closed and residents released with nowhere to go, Adnan found himself on the streets of Glasgow, sleeping in a night shelter for a month.

Adnan found a solicitor who got him back to where he should have been – in Mears-run temporary IAC accommodation in Glasgow. He now had his own self-contained flat in the centre of Glasgow where he could cook for himself, with an asylum seeker allowance of just over £5 a day. He stayed there for four months.

Then, in April, Adnan was one of hundreds of asylum seekers forcibly evicted from their flats and transported in vans (without any observance of physical distancing) to hotels. According to evidence which Mears gave to the Home Affairs Select Committee, the whole operation of eviction and relocation was the implementation of a Home Office directive in response to the pandemic.

The Mears mass eviction trampled over the few rights people have in the asylum system, as well as their safety and security. Many of those people, like Adnan, were evicted from their flats, dumped in rundown hotels and stripped of all cash support – which was probably unlawful, as the law requires that their ‘essential living needs’ be met, which must include phone costs as well as food and shelter.

Adnan did not cope well with life in the hotel. From isolation from Covid-19 in his flat he was now faced with a situation which allowed for no social distancing and food he could not eat. Smina told me, ‘We have had lots of reports from people in the hotels about really awful food and poor conditions there. Adnan’s friend told me that his mental health really deteriorated in the hotel. A week before he died his friend asked the hotel to call an emergency ambulance because Adnan was in a terrible state. His friend went with him to the hospital but said that the staff there did nothing, they offered him no medication, and sent him back to his hotel.’

We may never know how Adnan died (at present post mortems in Glasgow are taking up to a year), but looking at his history in the UK asylum system, we do know why he died. Adnan can be seen as a victim of the hostile environment policy of the UK Home Office. As the No Evictions Network spokesperson told the Ferret 10 May, ‘Individuals, racist policies and systems are directly to blame for this man’s death. This situation was entirely avoidable.’ One feels that the UK Home Office does not really believe that people like Adnan are truly human.