The pamphlet, The Fight Against fascism in Brighton & the South Coast is the published version of a talk by veteran left-wing socialist and anti-fascist, Tony Greenstein. 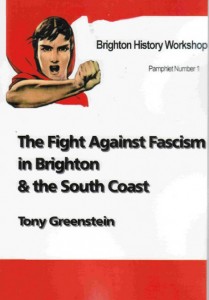 This is not a linear, chronological history of the opposition to fascism in the towns along the south coast, but retains all of the asides, diversions and zigzags in time of the original speech. While this makes for jumps in the narrative, it also makes for an interesting read especially in the first half, and a refreshing break from standard forms of writing history. The author’s views on the origins and nature of fascism and its British variants are followed by well-researched accounts of the pre-Second World War activities of the British Union of Fascists (BUF), and its post-war attempted come- back as the Union Movement. Within each section are interesting historical snippets, such as the fact that one-time suffragette leader, Norah Dacre-Elam, became a prominent member of the BUF.

The author frequently reiterates that learning the lessons from the campaigns against attempts to create a British fascist movement is his prime purpose. But in the second part, which is predominately on the movements against the National Front, British National Party, and EDL from the early-1970s to the present, this intention does not work so well. The anecdotal character of the speech and concentration on personal experiences sometimes detracts from learning those lessons. But the general reader will still find much in this pamphlet to provoke reflection about how to build the anti-fascist movement in Britain today. Moreover, the need for accounts of our history, written by those who participated in its making, is as great as ever.