A recently-published report by Ireland’s Ombudsman for Children puts the media’s power to influence state action under the spotlight.

Last year, while the world’s media was shocked by an apparent case of child abduction by a Roma family in Greece, Ireland’s police took two blonde-haired children from their dark-haired Roma parents, following tip-offs from the public in two different towns. A new report by Emily Logan, the result of a Special Inquiry into the actions of Ireland’s Gardai, finds that the force racially profiled (or acted on ‘prejudiced’ tip-offs relating to) Roma families, and contextualises its actions alongside the distinct media narrative that portrayed the Roma as child abductors.[1] Global media hysteria had taken root in the civic imagination of Ireland’s Athlone and Tallaght.

The seeds of the story

In October 2013, police raided the home of Christos Salis and Eleftheria Dimopolou, a couple living in a Romani-populated suburb on the outskirts of Farsala in central Greece. Searching for drugs and weapons, police instead found a blonde-haired, blue-eyed child. Maria looked different to her dark-haired parents; officers concluded that she must have been kidnapped. They took her into care, her parents into custody. Greek society re-christened her the ‘Blonde Angel’.

Reports of the discovery found their way from the police station to the newsroom of Greece’s Alpha and SKAI television outlets, both of which sent news teams to the suburb to gather evidence of abduction and cruel treatment. Neighbours spoke out in defence of the couple, claiming that they always cared for the child. ‘We loved her so much’, said her adoptive uncle, ‘with so much passion’. Family videos showed Maria as a toddler, dancing with her family. But these were taken as evidence that the child was being groomed as a money maker, not just by her family, but by the Roma community among whom she lived. Neighbours’ description of her as a ‘special princess’ led commentators to imply that they saw her as a commodity, groomed in the first instance for a life of begging, before graduating to ‘use in the sex trade’.

The story gained almost instant global notoriety. The face of the ‘found’ girl was broadcast on news channels the world over, and on the front pages of major newspapers, from the US, across Europe and in the UK. We were back with the familiar anti-Gypsy trope that led the world’s media to see only ‘Gypsy child snatchers’. In the UK, this fit with well-established media narratives of British children stolen from their parents in foreign lands; the distraught parents of Ben Needham and Madeleine McCann, children who went missing in Kos and Portugal, were sought out for comment by the UK’s press.[2] As BBC camera crews flocked to the suburb where Maria once lived, the Roma community, angered at the media’s manipulation of their attempted defence of their neighbours, chased them out. Galled at the denial of access, the crew took this as a sign that the community had been living a secretive parallel life. ‘Was there something sinister involved’, they asked, ‘and how far across this community does it stretch?’

None of it was true. The couple’s story (that they had adopted Maria from a family that could no longer care for her) was corroborated when the girl’s biological mother came forward. Written out of the story was the severe poverty and institutional neglect that Greece’s Roma community faced; the widespread racism, in a country that had recently elected eighteen members of the neo-Nazi Golden Dawn to parliament, 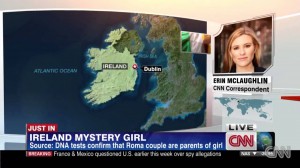 which had driven a spate anti-Roma pogroms in the preceding months;[3] and the culture of police harassment that sanctioned the same sweeping raids of Roma communities as had caught Maria in the first place.[4] But by this point the seeds of the story had been caught on the wind of global media, and planted over 2,000 miles away in Tallaght.

Hunting for witches in Tallaght

The Logan report depicts a culture of suspicion bolstered by the press and, at least to some extent, enmeshed in police practice as a result. But a fuller history of the experiences of one implicated family in Tallaght can be found in local news reports. A Roma family had moved into the area in 2008. Over five years, they and other Roma families living nearby had endured a number of racist attacks, in what appeared to be an attempt to rid the district of them. Bricks had twice been thrown through the family’s window, and residents of Tallaght had threatened them a number of times. On 21 October, after two days of front-page headlines and TV coverage had claimed Maria had been stolen, an Eastern European member of the public grew suspicious of the family’s blonde-haired blue-eyed 7-year-old child. They logged on to Facebook and left a message on the page of an investigative TV journalist.[5] ‘Today was on the news the blond child found in Roma Camp in Greece’, they said. ‘There is also little girl living in Roma house in Tallaght and she is blond and blue eyes.’ They left the girl’s name and address, which the journalist’s production team passed on to the Gardai. At 4.30pm, the Gardai turned up at the family’s home and demanded that they prove that the child was theirs. When they couldn’t find a birth certificate, the Gardai took the child away.

Meanwhile, that same day in nearby Athlone, a Roma family – a young couple, an elderly woman, and a baby – went to the County Clare fair to set up a hair-braiding stall. A woman brought her daughters to the stall to have their hair done. While the girls were being pampered, their mother grew distracted by the complexion of the Roma family’s baby. ‘He had very blond hair and the bluest eyes’, she said, but ‘all the others were completely dark in complexion, eyes and hair’. The next day, she decided to email her discovery to the Missing Persons Bureau; ‘The recent news about the little girl Maria who was found made me realise that I should have reported it.’ The Gardai then tracked the family down via their trades licence for the festival. At 7pm, the Gardai turned up to the family’s home. The family was known to the Sergeant on duty, and they were on good terms. So when asked to provide a birth certificate for their baby, they were reticent. This reservation was taken as cause for suspicion. The father’s explanation of their physical difference – that the baby had oculocutaneous albinism – was rejected. The child was taken into care, and his father, scared and confused, was taken in for questioning. Internal Gardai reports went so far as to claim that they were not told of his condition until after they had taken him into care, but Logan’s report corrects this, and concludes that the Gardai’s actions therefore constituted ‘unreasonable’ ‘ethnic profiling’.

News of these interventions found their way to Ireland’s press. On 22 October 2013, the Sunday World ran the exclusive feature on the girl of Tallaght. The following day the Belfast Telegraph picked the story up, both the Daily Express and Daily Star announced ‘“Maddie” found in Ireland’, and the Daily Mirror declared an ‘abduction panic’. News crews descended on the doorstep of the family’s home, preventing the child from coming home. Logan is scathing of this practice: ‘this action showed a total lack of consideration for Child T and her family … members of the media responding to cases such as that of Child T in future should consider more fully their obligations under the Code of Practice for Newspaper and Periodicals in relation to children, privacy, fairness and honesty.’ 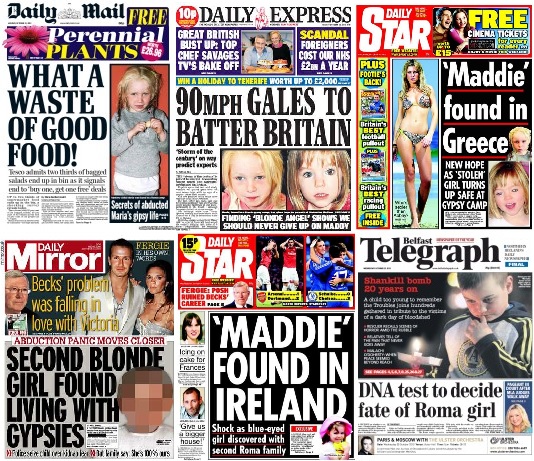 The Logan report shows the power of the press to, in the first instance, create public hysteria, and in the second, make this hysteria self-fulfilling. By the time the story reached Ireland, narratives of Roma Gypsies snatching blonde-haired children had influenced the public to such an extent that ‘ordinary’ citizens were finding evidence of a crisis that wasn’t there, and state institutions were, by the same influence, corroborating it, intervening in people’s lives on its basis. The press then took the actions of the Irish state as evidence of an outbreak of abductions; its narrative was sustained by the very facts on the ground its original misreporting had created. Logan notes the ‘explicitly prejudiced’ nature of the abduction reports, and places the blame squarely on the ‘international context’ of media narratives:

In the cases of both [children] in Ireland, there was a categorical link to the reporting of the case of ‘Maria’ in Greece. The media coverage of the case in Greece was influenced by, and indeed fed, unfounded and deeply prejudiced myths regarding members of the Roma community abducting children. Sadly, it is clear to the Inquiry that some people living in Ireland share those deeply prejudiced and racist opinions, asserting that members of the Roma ‘rob’ children as a means of accessing social welfare benefits.

Time and again, media witch-hunts have ushered in state action – from the forced resignation of then-Home Secretary Charles Clarke for the failure to deport foreign national prisoners in 2006,[6] to the counter-terror inquiries into the so-called ‘Trojan Horse’ takeover of Birmingham schools by hardline ‘Islamists’, blueprinted in a letter published by the Sunday Times now widely believed to be a forgery.[7] Logan’s report tracks the impact of press reporting on the lives of two Roma families: from the creation of suspicion, to the accusation of the innocent and the hounding of the acquitted.

[1] Report of Ms Emily Logan, Garda Síochána Act 2005 (Section 42) (Special Inquiries relating to Garda Síochána)  Order /2013, July 2014. [2] The obsession of the red-tops with lost children was spearheaded by Rebekah Brooks (and later adopted on the whole by the tabloids) during her time as editor of the News of the World. In July 2000, Brooks led a campaign naming and shaming paedophiles, which eventually led to a reported string of vigilante attacks on men either named by the paper or misidentified as such. When news of the attacks came to light, NoW backtracked. By 2002, it was, instead, campaigning for ‘Sarah’s Law’, which would enable parents to access information on child sex offenders living in their area. This was the background to NoW’s ‘avid pursuit that same year of the missing teenager Milly Dowler’, which saw senior members of the newspaper’s staff agree to the hacking of the missing girl’s phone, driven by the hysteria of their own editorial agenda. This illegal act propelled NoW’s eventual demise of 2011 and the Leveson inquiry into press ethics. See‘News of the World suspends name-and-shame campaign’, Guardian (4 August 2000); and Peter Jukes, ‘Rupert’s red top’, New Statesman (11-17 July 2013). [3] Liz Fekete, From Pillar to Post: pan-European racism and the Roma, IRR European Research Programme (July 2013). [4] Ibid. [5] Though unnamed in the Logan report, the journalist was Paul Connolly, whose eponymous investigation series had previously seen him expose ‘crooked’ members of County Limerick’s Traveller community. [6] Frances Webber, Borderline Justice: the fight for refugee and migrant rights (London, Pluto Press, 2012). [7] Robin Richardson, ‘Naming the narratives: the Trojan Horse affair in Birmingham, IRR News (5 June 2014).

I am a black mother with a blond hair blue eyed child. Thankfully my daughter is four years older than the McCann child. Moroccan Berbers, Irish or Greek Gypsies; India, who and where next!

Your article reveals as much about the unpleasant truths of modern day journalism as it does the calibre of institutions and the people in power. Illiteracy about human evolutionary genetic architecture is truly unforgivable in the 21 century and an enlighten world.