Isaac & I: Chris Searle and friends

A special event to launch the first part of Chris Searle’s autobiography, Isaac and I, to be published by Five Leaves. 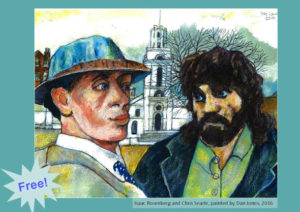 Chris is a teacher, poet and activist who found himself on the front pages of the newspapers in 1971 when his pupils at Sir John Cass Redcoat School in Stepney went on strike in protest at his sacking. His crime, in the eyes of the school governors, was to have published a book of the pupils’ poetry, Stepney Words, which spoke less than favourably about their life experiences.

Isaac and I is the story of how Chris came to teach in Stepney and the story of the school strike, which became a national news story. Having moved to North America and the Caribbean in the 1960s he was witness to the civil rights movement and the emergence of Black Power. Inspired by these experiences and his long-term muse, the Jewish war poet Isaac Rosenberg, Chris settled in Stepney determined to inspire his underprivileged pupils with poetry. Their words spoke a plaintive truth about their lives and the inequality they faced as working-class children in the early 1970s East End.

This event will be hosted by Alan Gilbey (East End Backpassages) and will feature some of the original school poets reading their work. Chris will share his passion for Isaac Rosenberg, and special guests including Alan Dein, Dan Jones and others will reminisce about this eventful moment in 1971 which affected so many local people. There will be copies of Isaac & I for sale.